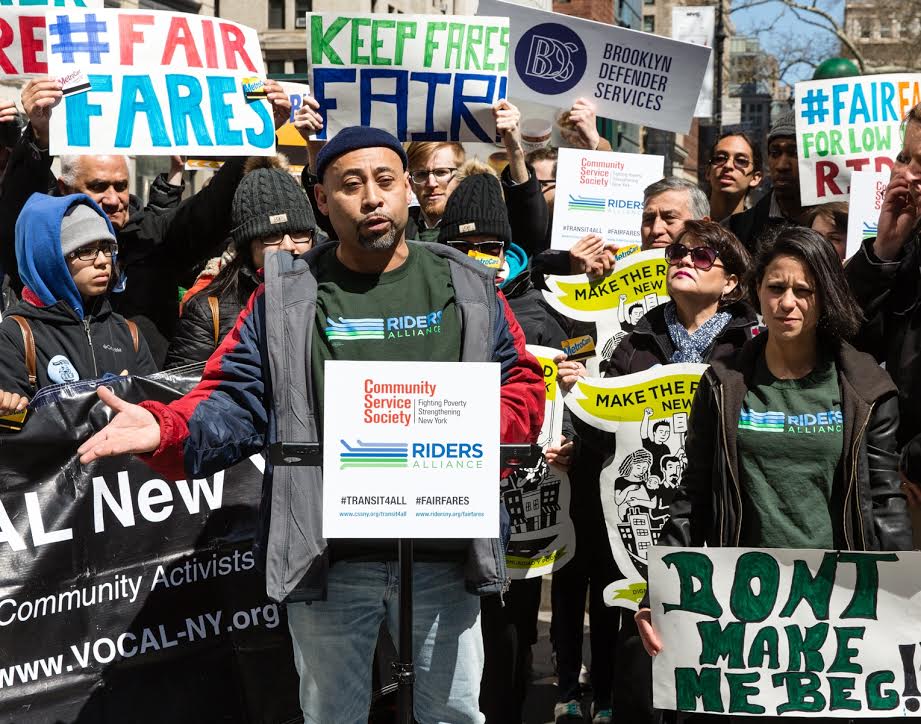 Not long ago, as I entered the 149th  Street and Grand Concourse station in the Bronx where I live, I saw a group of undercover police officers surrounding a young man under arrest for jumping the turnstile. As I stared, I remembered my own run-in with the cops for fare evasion. Seeing this kid get arrested, my mind returned to that moment: the cold metal of the grate against the back of my head, the suffocation of the officer's forearm deep in my chest, and my fear that my attempt to spare my mother’s health—however well-intentioned—might put my own well-being at risk.

When I was in 7th grade I was accepted into Prep for Prep, a summer program that provides academic and leadership development opportunities for low-income kids of color. At 14 years old, I wanted nothing more than to sit around and hang out with my friends. But my mother understood the importance of this opportunity for a low-income black kid from the Bronx and insisted that I not let this pass me by. At her urging, I attended classes on weeknights and weekends in Midtown.

The program provided two-trip MetroCards, but because of bus transfers, they weren’t enough to get me there. To help out, my mother, who has multiple medical conditions that require her to take life-saving pills every day, would use savings dedicated to her medical bills to buy me a MetroCard.

It hurt me to see my mother make that sacrifice. No parent should ever have to choose between their health and a MetroCard for themselves or their family. But a lot of people make exactly these kinds of near-impossible choices every day to pay for their travel. In fact, a study by the Community Service Society of New York (CSS) found that one in four low-income New Yorkers reported being unable to travel to doctor appointments, jobs, and other necessities because of the cost of a MetroCard. The same report found that the cost of a 30-day unlimited MetroCard often makes up over 10 percent of a family's budget, forcing individuals to make painful sacrifices, including on essentials like rent, food, and other bills.

I saw my mother struggle with that decision every day—until the day when I decided I couldn’t stand to be the reason anymore. I lied and told my mother that I already had the fare to get to the program—and jumped the turnstile. I wanted to give my mom a break. I wanted to help her out for once after all that she had done for me.

Of course I was stopped by the cops. After a terrifying encounter, they let me off with a warning—but we all know that I was an exception to the rule.

James Baldwin once wrote in an article for Esquire Magazine, “Anyone who has ever struggled with poverty knows how extremely expensive it is to be poor.”  This is certainly true in New York City, where, as CSS found, 58% of low-income riders rely on the transit system—but are all too often unable to afford to use it. This is the inescapable trap of poverty: the poor pay more for everything.

This is true of transit as well: we pay more for a single-ride MetroCard because the fare structure incentivizes buying unlimited monthly MetroCards. Those who can’t afford to shell out a lump sum of $116 (and rising) are paying more than the wealthier for their trip. We pay more because we don’t make enough to take advantage of the pre-tax transit benefits program middle-income and wealthy New Yorkers enjoy. And we pay more when we get caught begging for a swipe or jumping the turnstile -- we get fined hundreds of dollars, get carted off to jail, or worse.

Like my neighbors, I know all too well how poverty forces people to make tough, sometimes illegal, choices simply to get around. Unlike my neighbors, every fall I have a temporary escape from poverty. In no small part because of the opportunities that Prep for Prep provided, I’m a junior at Harvard University. College isn’t just a place to earn a better life for myself in the future; it’s also a reprieve from the chronic trauma of poverty and the exhaustion that comes from having to calculate the cost of every action.

That’s why I’m joining CSS and the Riders Alliance in the call for #FairFares and asking Mayor de Blasio and our City Council to fund half-priced MetroCards for low-income New Yorkers.

Public transit should connect every New Yorker to good jobs, affordable housing, and the rich cultural opportunities that this city allows young and eager minds like me. Hundreds of thousands of New Yorkers are left out of those opportunities—but we can change that if we make public transit truly accessible to every member of the public, including the poor.

If my mom hadn’t sacrificed for me, I wouldn’t be where I am today—but the point is that no one should have to make the kinds of sacrifices my mom made to help their kids succeed. With Fair Fares, 800,000 more New Yorkers could be eligible for half-priced MetroCards that could save them up to $700 a year. Imagine how many parents could help their kids thrive with these savings if the Mayor would stand up for every New Yorker’s right to access public transit?

***
Robert Rush is a junior at Harvard University. He grew up in the Bronx and is a member of the Riders Alliance, a grassroots non-profit that fights for better, more affordable public transportation in New York City.