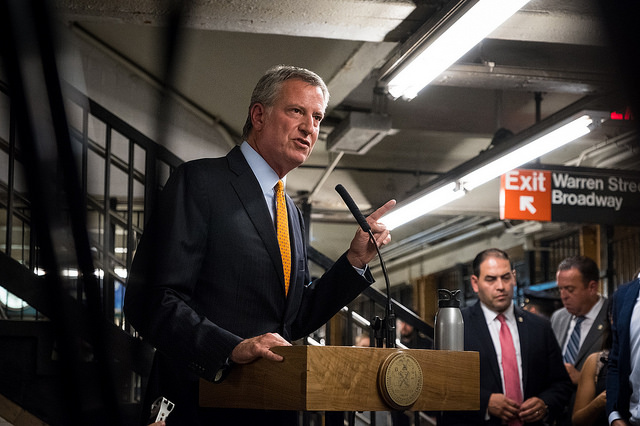 Governor Cuomo’s declaration of a state emergency after the Harlem subway derailment in June offered hope to suffering transit riders because it was an acknowledgement there was a crisis and the Governor was taking responsibility for addressing it.

An emergency declaration in New York law requires an affected agency to develop plans to deal with whatever disaster the Governor has declared. After a review, new MTA Chair Joseph Lhota  proposed to spend an additional $450 million in maintenance programming and $380 million in capital investments to reduce delays and breakdowns. The Governor and Lhota also are seeking half the new money from New York City, reigniting public rancor between the Governor and Mayor de Blasio and raising anew the question of responsibility for the transit system between the State and the City.

Both the State and the City have billions of dollars in reserve funds available now and can afford to make the contributions. Whether de Blasio makes a decision to contribute to the plan or not, an understanding of who is paying for the transit system at this time is essential.

The basic facts are that the City and its suburbs already pay virtually all of the MTA’s costs, either directly or indirectly.

The budget adopted by the MTA for 2017 reports that 57%, more than $4.5 billion, of New York City Transit’s costs are paid by the fares from riders of the subway and bus systems. The next largest amount, about $3.5 billion, came from a group of dedicated taxes which, although imposed by the State, are levied within the 12-county MTA region, and not in the rest of the State.

These dedicated taxes include a payroll tax, a corporate profits tax, a sliver of the sales tax, the New York City real estate transfer tax, and others. The New York City government directly contributes $362 million to New York City Transit, including a required match of a corresponding State subsidy, as well as reimbursements for paratransit, students, and the elderly. New York City Transit also receives a cross-subsidy from excess cash available from the tolls of the Bridge and Tunnel system of $287 million.

The State’s General Fund provides about $356 million, including a contribution to compensate for a cut in 2011 of an unpopular payroll tax enacted within the region during the recession. While these funds derive from the general taxes of the State, a Rockefeller Institute study in 2011 reported that New York City and its suburbs were paying 72% of the State’s tax revenue in 2009, and that study did not reflect the fact that most economic growth in the State has occurred downstate since then.

The bottom line is that this all means that only about 1% of New York City Transit’s operating funds come from outside the MTA region.

All these resources together don’t just fund the operating budget, they also pay for the debt service on the tens of billions of dollars the MTA borrowed to pay for the capital programs of prior years as well as the ongoing borrowing  for the new one. About $1.3 billion a year goes to pay interest on debt associated with New York City Transit from these flows of funds, with another $250 million a year covering New York City Transit-related debt from Bridge and Tunnel toll surpluses.

The New York City government also pays substantial subsidies to other parts of the MTA system.

It provides $460 million a year to MTA Bus, the express bus system taken over by the MTA during the Bloomberg Administration; $58 million for the Staten Island Railway; and $98 million for station maintenance for Long Island Railroad and Metro North facilities that are within the City.

New York City also pays the cost of the New York Transit Police, more than 3,000 police officers who patrol the subways and other mass transit facilities. The Police Department budget is $10 billion a year, meaning the 10% of the police force committed to safety in mass transit costs the City roughly $1 billion a year. This large level of support is barely reflected at all in the MTA or New York City Transit budgets. Embedded within the State and City budgets are payments for interest on bonds issued by State and City government for the benefit of mass transit, with $301 million paid by the City and $180 million by the State, according to a 2015 report by the New York City Comptroller.

Governor Cuomo has said that the State was adding a historic level of funding to the current MTA capital budget, the 2015-19 capital plan. There is but a scintilla of truth to that pronouncement. That is because, of the $8.3 billion claimed to be committed, sources for $7 billion of the contribution have yet to be identified, and the State law providing the support says the State does not have to come up with the $7 billion until the MTA exhausts all its own resources first, with a deadline of 2025 for the State’s $7 billion to be found.

Even when the State finally comes up with the money, it will likely come from the MTA region, either through some form of congestion pricing or a diversion of some current tax receipts from the region. The City’s $2.5 billion promised contribution to the plan, part of a deal with the State, is to be paid on a schedule concurrent with the State’s schedule, and the City’s own budget does not forecast its contribution being paid until after 2019.

If the Mayor wants the public to understand why the City won’t contribute further funds to the MTA, he needs to clearly explain that the City’s residents and businesses already cover the costs.