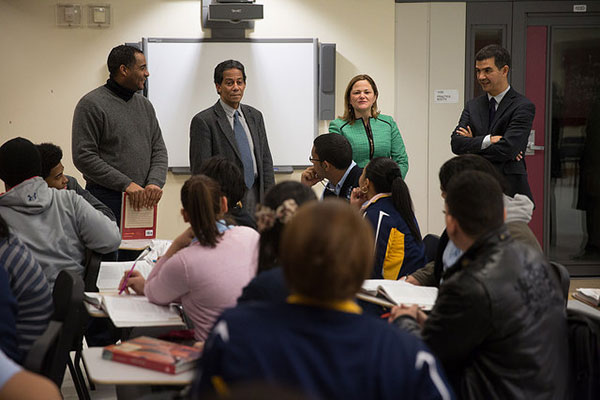 As we reflect on the recent September primary election in New York City -- where only 14% of active registered Democrats actually cast a ballot, a 53 percent drop in turnout compared to the 2016 Democratic presidential primary -- we are concerned that the city citizenry is not adequately prepared for responsible voting. But, how can we expect young people, or adults for that matter, to participate in our democracy if we have not educated them to do so?

Many have blamed turnout woes on a lack of enthusiasm for candidates or structural voting challenges. Though there are certainly reforms to be made, instead of only perpetuating this blame, we can and should aim to inspire more participation throughout the city. A bold idea at this critical moment in our national and municipal history to increase voter participation and civic engagement is to reinvigorate civics education in New York through a new, engaging pedagogy: Action Civics.

Action Civics is a student-centered, project-based approach to delivering participatory civics education to young people. This is not your grandmother’s civics. Instead, the innovative approach to civics education begins with teacher-student interactions in the classroom, and ripples outward to help students identify community challenges, name root causes, and propose concrete solutions, which often engage local government to remedy those challenges.

This community-minded and outreach-intensive strategy provides a multitude of benefits: Action Civics gives students the key civic knowledge, skills, and motivation to develop regular voting habits, while furnishing additional motivation for teachers, parents, and other stakeholders to start or recommit to consistent voting and civic engagement themselves.

New Yorkers can boast of tremendous civic accomplishments—a public transportation system that, until the more recent constant subway delays, was the envy of the country; world-class parks in every borough; an amazing array and concentration of arts and cultural institutions; and the nation’s largest public school system, to name just a few. The city’s many accomplishments must not be taken for granted, though. As New Yorkers, we are always looking to the next frontier. Living up to our full civic potential requires a renewed commitment to preparing our young people, and all residents of our city, to exercise the franchise as educated and empowered voters. What better stage of development to begin this process than with our youth, in our classrooms?

To be clear, Action Civics is not the same as conventional civics education. Traditional civics, the mere mention of which can cause a yawn, assumes that increasing awareness about how our political system works, and rote memorization of the names of candidates and key provisions of the Constitution, is sufficient for educating and mobilizing current and future voters.

We could not disagree more. Civic knowledge is important, but must be supplemented by civic participation that adopts a “learning by doing” pedagogy.

We have found, for instance, that educating students about how to take action -- for example to advocate for the Department of Transportation to install a pedestrian safety signal at key intersections to address hit-and-run accidents near their school or pushing the State Education Department to update the outdated health education curriculum to ensure that students are educated about how addictive opioids are given the epidemic plaguing their community -- is a more effective pedagogical approach than a textbook-first experience with democracy. Not only are students taking action, but they are learning how city government or the State Education Department actually works, and who elected and appointed officials are accountable to.

Local election officials matter, not just who the President is, and Action Civics helps young people understand that in a very real way, leading to increased interest in local elections.

In a few short weeks, on Election Day, New Yorkers statewide will be presented with a back-of-the-ballot question: “Shall there be a convention to revise the Constitution and amend the same?” Given this unique, once in 20-year opportunity, should it be left to chance that young (or older) people will be sufficiently informed and prepared to understand the importance of this ballot question? Will they know how to take action to advocate in support of or against such a convention? We think not, which is why we released lessons for teachers to educate 8th- through 12th-grade students about this rare opportunity.

But this is only one example highlighting the urgency of ensuring that all students statewide receive an effective Action Civics education, focused primarily on local issues.

Advocates have consistently pushed and seen tabled reforms to modernize New York’s antiquated voting laws. While enacting those reforms should remain a priority, boosting voter turnout in New York requires a more long-term vision to improve our democracy, focused on empowering citizens themselves.

Action Civics holds the promise for the future—it is a transformative, long-term investment in the health of our democracy. That is why Speaker Melissa Mark-Viverito and the New York City Council made a bold investment in Action Civics through the Civic Education in City Schools initiative allowing Generation Citizen to bring its rigorous, standards-aligned curriculum to approximately 3,4000 New York City public school students in the 2016-17 school year. And, they renewed their investment in New York City’s young people again this school year.

We know New York’s young people need this approach, but implementing it citywide and, ultimately, statewide will take substantial resources. Now is the time for all of our city and state leaders to partner with us, and the broader civics education field, to bring true Action Civics to secondary students in New York. Then, we can dream of a day with a vibrant local democracy, in which the vast majority participates in local elections.