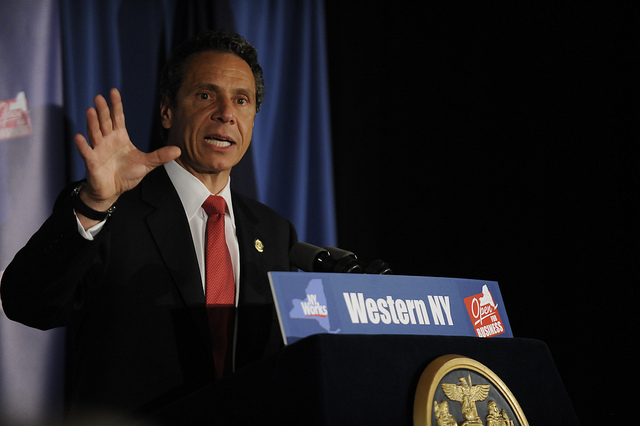 Responding to criticism that his administration’s efforts to help the economy in upstate New York have been ineffective, Governor Cuomo recently stated at a luncheon in Glens Falls, a small upstate city, “It’s been a bad 50 years.” He added, “You’re not going to turn it around in a couple of years. But have we changed the overall trajectory? Yes.”

A great deal has been written not just about weak economic growth in upstate New York, but also about the lack of accountability and transparency of the state’s economic development agency, Empire State Development. It is essential to examine these concerns in the larger context of the health of upstate and how the region fits into the larger New York economy, the allocation of state government resources, and state politics.

A major political fact about upstate New York stands out in the context of any discussion about its destiny. Upstate New York provides a huge share of the vote in the state’s gubernatorial elections, which occur every four years in the even years not home to presidential elections.

Census 2016 estimates of the population of upstate New York, defined as all the counties north of New York City, Long Island, Westchester, and Rockland, were that the region was about 36% of the state’s total population. But in 2014 upstate New York was home to almost 49% of the gubernatorial vote, when Cuomo won re-election. New York City was home to only 26.5% of the statewide vote, although its share of the state population is 43%. That was equivalent to 1.01 million of the 3.81 million total gubernatorial votes.

Upstate New York’s share of the vote in gubernatorial elections -- nearly half -- means that the area is politically important to whomever the governor might be and explains the focus on attempts to meet the needs of the people who live there. This, in combination with other factors, can help explain Governor Cuomo’s intense focus on Buffalo and other upstate areas, and the many economic development programs the state has launched to reinvigorate the upstate economy.

Downstate residents -- especially people from New York City -- ought to take upstate’s staggering disproportion of the vote as a wake-up call on the issue of how voter turnout may impact the allocation of resources. Not for the purpose of taking resources away from an area with a stagnant economy, but to make sure there are rational, articulated reasons and shared goals as to why state policies put resources in one place or another.

Let’s look at job growth over the past six years, measured as annual average employment in 2010 versus the annual average in 2016, and how upstate New York compared to the rest of New York and the nation.

Long Island and the northern suburbs (Orange, Rockland, Westchester is the metro area unit) gained over 7% in total jobs compared to 2010, and over 10% growth in the private sector.

New York State as a whole grew 10%, with 13% in the private sector, very similar to the national growth rates, which were 10.7% total growth and private sector growth about 13%. The figures, all 2016 compared to 2010, certainly show that upstate New York was growing far more slowly than the rest of New York and the nation as the United States emerged from the Great Recession that hit in 2008-2009.

Upstate New York has nearly 7 million people, meaning it has a larger population than at least 33 states, and has 3 million jobs. It is a substantial economic region itself, and, like many parts of the United States, its job base has been battered by recessions and loss of manufacturing jobs.

Upstate New York has 12 metropolitan areas, and its three largest fared better than a number of the metro areas with smaller core cities. The Buffalo-Niagara region and the Rochester metro region both gained about 30,000 private sector jobs, almost 7% growth from 2010 to 2016. The Albany area gained 34,000 private sector jobs, about 9%. The Syracuse area, upstate’s fourth largest metro area, grew more slowly, gaining only 3% in private jobs.

The Binghamton and Elmira areas, in the Southern Tier, and the Utica-Rome area in central New York, lost 10,000 jobs between 2010 and 2016, although 7,000 of the jobs were in government. Utica-Rome did not lose private sector jobs but had almost no growth in them either. The remaining regions varied in their growth patterns but in general had slow growth. Loss of government jobs in upstate New York stabilized by 2013 after several years of cutbacks as the economy and the state budget improved.

Job growth overall in New York has continued in 2017, but a recent report by the Federal Reserve Bank of New York stated that growth in the upstate New York economy has slowed in 2016 and 2017.

New York’s efforts include not just the activities of Empire State Development, but substantial budget allocations and other development tools. Given the range of initiatives, from the Buffalo Billion to Start-Up New York, new casinos, the nano-technology centers, the Regional Economic Development Councils, and other efforts, it would be unfair to say the New York State government is not trying to help upstate New York. It is trying.

The next columns in this series on the state’s economy and economic development efforts will look at these concerns together: the severity of upstate New York’s manufacturing and other job losses; the extent of the effort by the state government to put resources into upstate; whether resources are being used effectively or being squandered; and to what extent the outcomes of these initiatives are transparent and being reported in meaningful ways.