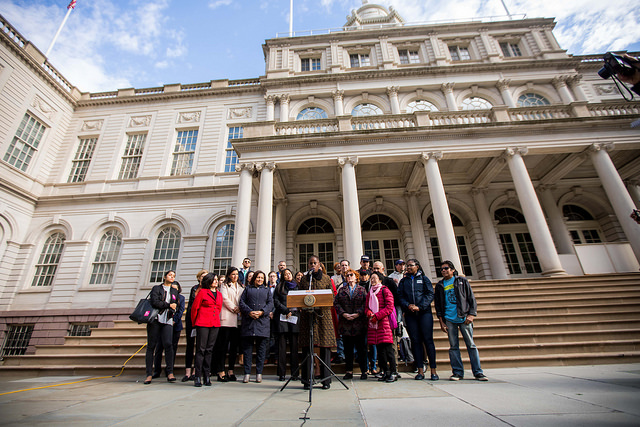 People marching in the streets to protest the Trump administration’s policies often chant “This is what democracy looks like!” It’s a good reminder because many Americans have forgotten. Too many of us have taken for granted the rights and freedoms guaranteed us by the United States Constitution. But not anymore. Not when states threaten to arrest people who exercise their right to assemble and a president uses his office to bludgeon people whom he calls “losers.”

The New York Society for Ethical Culture was founded in 1876. Voter turnout that same year in the presidential race between Republican Rutherford B. Hayes and Democrat Samuel Tilden was 81.8 percent nationally. During the 2016 election, the national turnout was 60.2 percent. And this past election, the turnout in New York City was a record low 21.7 percent, a far cry from mayoral elections of decades ago. We can point to many reasons for the dramatic downturn in voter turnout over the past 140 years. But one of the biggest culprits is the lack of civics education in our country.

The purpose of civics is to prepare young Americans to be reflective citizens who value democracy. In that respect, we have failed. It’s clear to see where we went wrong. In the 1980s, policymakers started shifting focus to more “teachable” subjects like math. Some 20 years later, federal funding for social studies was eliminated. The result? A generation in which only one-quarter of U.S. high school students reach a proficient standard in civics assessment. Even more shocking, just two-thirds of students can name all three branches of government.

If there is a silver lining to the results of the 2016 election, it is the dramatic increase in civic engagement. Attendance at Women’s Marches across the country and the world stood in stark contrast to the number of Trump supporters attending his inauguration the day before. Subsequent marches organized by scientists and environmental activists rallied supporters from diverse constituencies for common causes. But a permanent return to civics must start with our youth.

As humanist philosopher John Dewey wrote, “Democracy needs to be re-born in each generation and education is its mid-wife.” We take that to heart at the New York Society for Ethical Culture. Through our Ethics for Children program, we work to empower youth and make them more aware and involved in civic engagement. With a lack of in-depth programs elsewhere, programs like this are a necessary tool for parents to supplement the civics education of their kids.

Civics education should start early in a child’s life so their basic rights as Americans are instilled from an early age. That’s why our program is aimed at children ages 3-12. Each month has a new theme but the overall goal is the same: To teach our children about how democracy works and keep them informed. Our democracy will not survive if future generations are unaware of their rights and responsibilities.

From today’s corrupt political leadership to the rise of bullying on the playground, there is so much about the world that is unethical. How can parents raise ethical, civic-minded children? It starts with how we introduce these ideas. It’s not enough to teach children ethics and civics. They need to experience them. Take your kids to marches and protests, such as the Youth Empowerment march our members joined. Have them attend lectures and events, like the public reading of the Declaration of Independence we hosted with civil rights attorney Norman Siegel. Make sure your kids have great role models. Let them know about kids their own age who are making a difference, like the teenagers suing the Trump administration over its inaction on climate change.

Teachers must once again take seriously their vocation to prepare children to take their places in our democracy, not only to find jobs in our economy. Current affairs can be brought into the classroom to highlight the importance of critical thinking. Student debates encourage teamwork and research, as well as the excitement of intellectual sparring. Field trips to local courthouses and governmental assemblies make democracy come alive.

Ours is a nation deeply divided over core social values. Trump’s presidency is only exacerbating this divide. Truth itself is threatened by a daily barrage of lies and “alternative facts” from the White House. People indulging in what we have come to call “confirmation bias” find information, news outlets, and online memes to fuel their righteous indignation and reject any other opinions. Whatever our differences, we who call the United States our home must find the goodness in one another and work together to call it forth. Democracy is sacred, and it is entrusted to us.