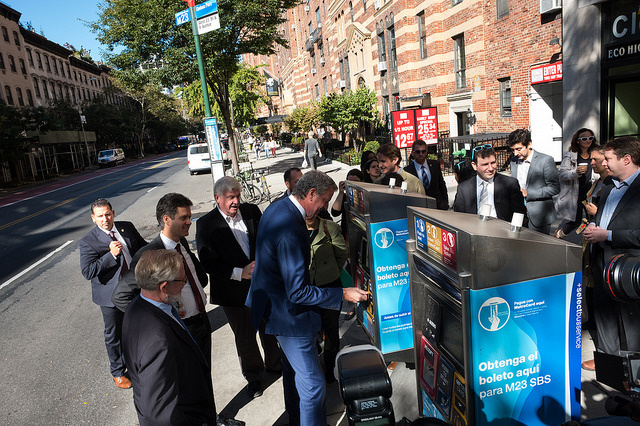 This is part two of a three-part series

Part one discussed: the promises and the reality, the difference between bus travel time and passenger travel time, who benefits and who is hurt by SBS, how the mayor, MTA and DOT mislead, and the true costs of SBS.

Denigration of Local Bus Service
In many cases, the introduction of SBS has resulted in a denigration of local bus service -- though this does not apply to Manhattan crosstown routes. Most notably this has occurred on the M15 First and Second Avenue routes in Manhattan and on the B44 and B46 routes in Brooklyn. Many riders who prefer the local are now forced to walk further to an SBS stop after waiting a half-hour for a local and seeing three SBS buses bypass their stop.

After implementation of the B44 SBS, complaints of long waits up to 45-minutes for the local forced the MTA to add additional local service, after three months and a new SBS stop at Avenue L. Although the B44 SBS uses the longer buses with a 50 percent greater capacity while the local uses standard length buses, local buses are more crowded since ridership is equally split between SBS and local. Riders complain of near empty SBS buses passing them by.

Problems with Enforcement
Passengers and cars are sometimes summonsed unfairly and a kangaroo court system exists where innocent people often are found guilty. Just a few examples: convicted for theft of services, a fine of $150, when it is proven at the hearing that there was a valid transfer on the MetroCard; cameras ticketing cars for crossing the bus lane when pulling out of or entering legal parking spaces; being summonsed during hours that a bus lane is not in effect, or a minute after it goes into effect or one minute before it is no longer in effect. Should someone be penalized with a fine exceeding $100 because his watch is a minute early or late? There should be a grace period of five minutes, as with muni-parking meters. And summonses mailed three months later make it difficult to mount a court defense.

There was at least one instance in 2014, captured on video, of police shoving, harassing and kicking a passenger for five minutes after getting off the bus, although he produces ID and an SBS receipt as requested.  We do not know what interactions preceded the video but it appears from the video that the individual is doing nothing wrong.

There have been instances where bus operators have told passengers to board the bus because all fare machines at a bus stop were broken and to get off at the next stop to obtain a receipt. However, before they could comply, the Eagle Team boarded the bus and summonsed them. This would not leave a favorable opinion about New York City if it happened to a tourist. The MTA has since clarified its fare payment policy when all machines at a bus stop are inoperable.

Other SBS Problems
Fare machines on the first route (Bx12) had to be replaced after three years because no one thought of providing weather protection, wasting millions. There are many SBS problems that the city and MTA have not resolved. These are: worn out pavement markings; poor and confusing signage for motorists; broken countdown time clocks and fare machines sometimes not repaired for months; inadequate exclusive bus lane enforcement; and riders who need an additional bus transfer due to SBS and are therefore required to pay extra fares to utilize SBS. (The governor recently vetoed legislation permitting an extra bus transfer for a single fare.)

The picture of the Nostrand Avenue bus lane in Sheepshead Bay was taken a year after implementation in 2014. It still has not been repainted.

Machines are not always placed where they are easily seen, making them easy to miss if you are running for a bus and are not aware beforehand that the route is SBS. Occasionally, non-SBS wrapped buses are used in SBS service which accept fares subjecting you to a summons if you board not realizing you are on an SBS bus. The signage at bus stops also could be clearer. The print stating "Get Ticket Here" and in much smaller print "Before You Board Bus" could be interpreted as paying before you board is an option. “Get Ticket Here” should be preceded with "YOU MUST" in large capital letters. To make matters worse, bus operators may not inform confused passengers who they see boarding without a receipt that one is necessary.

The 60-foot buses used on many SBS routes are more difficult to maneuver, do not work well in snow storms, have higher labor and fuel costs, and are more inefficient than 40-footers when the bus is lightly loaded. Yet the MTA does not substitute them with regular-length buses during times of light usage, such as during evening and overnight hours.

All SBS problems need to be addressed before the system is expanded further.

Negative Effects on Traffic and Local Businesses
There have also been negative effects on traffic caused by exclusive bus lanes that are being ignored or explained away. The Woodhaven Boulevard SBS has helped increase automobile travel times during peak hours by as much as 45 minutes. This is significant because about 80 percent of motor vehicle traffic is not bus riders and SBS is not attractive enough for people to switch to the bus. Bus lanes on Woodhaven Boulevard do not result in faster buses in the off-peak, but are mostly in effect 24/7 anyway. Curbside bus lanes on Saturdays were not necessary and have hurt businesses. The longer bus stops required for 60-foot buses reduce available parking.

DOT is proposing exclusive bus lanes on the wide portion of Kings Highway for the B82 where buses are already traveling near the 25 MPH speed limit except for three hours a day. This will also negatively affect traffic and will not benefit bus passengers. Merchants and elected officials are opposing bus lanes on the narrow portion of the road.

Public Participation is Inadequate
The “democratic process” used to create SBS routes is an illusion. There is no specific outreach to alert motorists; public meetings are not adequately publicized, and there have been complaints of some of them being held at inconvenient hours; SBS information for proposed routes and SBS progress reports are difficult to find on the internet; no public hearings (different from meetings) are held; many community concerns and negatives, such as reduced parking, are ignored; half-truths are presented with many omissions; DOT and the MTA only respond to questions they want to answer.

Community groups are allowed only one representative at Community Advisory Committee meetings. However, DOT stacked at least one of the 2015 Woodhaven Boulevard meetings with three supporters from Transportation Alternatives.

After initially stating to the communities that there was no relation between SBS and Vision Zero, DOT made SBS and Vision Zero part of the Complete Streets Program in order to use funding earmarked for Vision Zero to expand SBS. Underhanded tactics such as these have been a hallmark of the SBS program.

The process is dragged out to give the illusion of democracy when many meetings are not even necessary. Combined meetings could be held with more than one merchants’ association at a time in a given corridor cutting years off the SBS implementation process.

Instead, the divide and conquer strategy is used to prevent many negative opinions at the same time. It also affords the agencies the opportunity to provide different and conflicting responses to each group. The same strategy was used at the presentations to the general public. Plans are presented in bits and pieces so that communities do not see the complete plan. The promises and positives of SBS were presented as a sales pitch. The public was then divided into workshops of six people each with the discussions led by DOT employees, ensuring that everyone heard all the positives but not the negatives in coherent form. That resulted in no negative being heard by more than five other individuals instead of 30.

At the initial meetings, at least along Woodhaven Boulevard, problems and suggestions from communities were discussed with SBS presented as one possible solution. At subsequent meetings SBS was proposed as the only solution for all bus problems and community support was requested. At one Woodhaven Residents Block Association meeting where DOT was summoned to attend, an informal vote of SBS support was taken in which 100 opposed the SBS plan and only one was in favor. DOT’s response was that SBS would still be implemented. Since SBS was now a given, curbside bus lanes were proposed by the community, but DOT chose center roadway lanes instead, over community fears of decreased safety.

Any suggestion other than SBS is summarily dismissed. Only massive and organized protests can alter the pre-existing SBS solution. It took a major effort to reverse most of DOT’s 26 additional proposed left turn restrictions on Woodhaven Boulevard; DOT admitted to only 19 on the last page of their FAQ document, implementing a northbound restriction at Rockaway Blvd, while proposing a southbound restriction. Still, there are no signs to alert drivers where the next left turn is allowed, while they are only about once a mile, despite DOT promises of advance signage. That causes unfamiliar drivers to go far out of their way since right turns are also not allowed from the center roadway except for a few slip lanes.

Just recently, DOT agreed to eliminate Saturday bus lanes on Cross Bay Boulevard. Repeated suggestions for a B44 SBS stop at Avenue R were ignored prior to implementation. Residents and elected officials have now been fighting for five years for this needed bus stop.

Community involvement is far from adequate.

This is part two of a three-part series. Read part one here. The final part discusses why SBS is not a cure all, if it can work, and whether it is worth it.