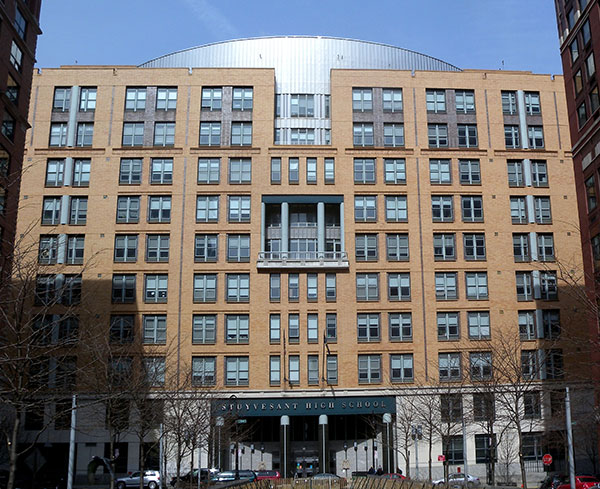 The tests didn’t start at the end of the first semester or even during midterms freshman year. They did not even start on the day that I made the trip down to Battery Park to take the “Stuy test.” Rather, they started toward the end of middle school, spending Saturday mornings in a hotel conference room in midtown Manhattan, taking a prep course run by a Stuyvesant math teacher (who, when I was a sophomore, would give me the lowest grade of my high school career). I remember that many of us wore our soccer uniforms and cleats to class because we had to hurry off to games immediately afterwards.

By this time I had been subjected to plenty of high-stakes exams: pre-school interviews, citywide exams, a fifth grade full of tests and interviews to get into well-regarded public middle schools, and, even after I had started attending one such school, the Hunter test, on which I did not come remotely close to earning the admission score. I understood some of those tests to be more important than others, but none carried the weight of the ones related to Stuyvesant. The implication, starting with preparations for the SHSAT, and continuing at a pace of six or more exams per semester during my time at Stuyvesant and additionally highlighted by the SAT, was that how I performed on each exam was going to impact the rest of my life.

My parents did not pressure me to get into Stuyvesant or seem to care about where I went to college (though it was always understood I would go). They did pressure me to do the homework the prep course assigned, and I recall that I did it. I scored a 560 on the exam -- the cutoff was 559 -- and was excited to be accepted as, technically speaking, the dumbest kid in school. I called a close friend who told me he had missed getting in by one question. He would be going to Bronx Science. Even though we only lived a few blocks away from each other, we drifted apart after that.

The pressure was entirely driven by the culture surrounding Stuyvesant. Other than the occasional creative writing course or class led by an outside-the-box thinking history teacher, Stuyvesant was all about tests. The midterms and finals were inflexible and merciless. Scantrons were everywhere. “What did you get on the test?” was a frequent question, one that had to be asked with a level of tact that high school kids are seldom capable of.

Even though I was, relative to my classmates, an unmotivated, average student, content to get Bs and take “remedial” Spanish and math (which at Stuyvesant meant taking ninth-grade Spanish as a ninth-grader and not taking calculus), I would sometimes wake up in the middle of the night and scribble math equations on a piece of paper next to my bed. At my mom’s advice, I took to sleeping with textbooks underneath my pillow the night before tests, hoping to learn just a little more through osmosis.

At the end of one semester there was a rash of episodes involving fire alarms getting pulled and the school being unnecessarily evacuated. It was rumored that they caught the culprit by identifying a single student who had an exam scheduled on each of the days an evacuation occurred. Students whispered that we could not access the patio outside the fifth floor cafeteria because the administration was afraid if we were allowed on it there would be suicides. It was said we were not given class rankings for the same reason.

Cheating, which relied both on old-fashioned methods and newfangled technology like cell phones and digital cameras, was rampant. Some kids cheated to get the grades they felt they needed and some kids cheated just to get by. Some kids just disappeared, presumably moving on to schools where things were a little less intense. I remember crying in a taxi on the way home from college night as a sophomore because it was clear I could not even expect to get into “Wash U. in St. Louis.”

Exams aside, there was a lot of fun to be had at Stuy. I wrote for the sports section of the school newspaper. A review of the yearbook tells me there were more than 90 clubs, including something called “The Real,” devoted to “underground hip-hop music,” that I was the president of -- it is my recollection that we had no budget or formal meetings. I played backup tight end on the football team, which I am not sure I could have done at another school. Significantly, in my experience the football team was one of the few places at Stuyvesant where Asian, black, Hispanic, and white students really spent time together (the cheerleading team was a similarly integrated group).

I can still remember all the different parts of the school where students of particular races congregated almost exclusively and I suspect that my classmates can as well. On the second floor where the main entrance and exit was located, there was a “senior bar” -- basically a waist-high counter surrounded by lockers -- that at the time I would have said was the epicenter of the social life of the school but I now realize was overwhelmingly white. There was another “bar” that was widely referred to as the “Asian bar” on the sixth floor. I recall that there was an area behind the escalators on the fifth floor where African-American students hung out.

The exact demographic makeup of the school at the time is difficult to find online, but as I recall, Asian students made up about half the school, with white students making up most of the other half. As now, the percentage of black and Hispanic students was well below 10%. I am sure that Stuyvesant has changed in many ways since I left, but in some important ones, it has not.

Like most alums, it is through my perspective from and since my time at Stuyvesant that I view the ongoing debate about how -- and whether -- specialized high school admissions should be reformed. Stuyvesant needs to be more diverse and it is not entirely clear how best to make that happen.

What I find missing from the debate is a discussion about how the “Stuy test” and the Stuyvesant experience are linked. If students are not going to be admitted based on their ability to excel on a single, high-pressure exam, they should not be evaluated primarily based on high-pressure exams. It seems likely that a student body admitted to Stuyvesant based on criteria other than the SHSAT would benefit from a reduced emphasis on testing. It may even be that all students, including current Stuyvesant students, would benefit from a reduced emphasis on testing.

At the same time, the iteration of Stuyvesant I attended left me very well prepared for college and law school. I feel strongly that I was always going to be an average student in high school. At an underperforming school, that might mean barely graduating. At Stuyvesant, that meant a B average and a partial scholarship to Lehigh University. Many New York City students would benefit from the education I received, regardless of how they are admitted to the school or how painful it might be while they are there.

***
Jonathan Fishner is a graduate of Stuyvesant High School, class of 2001, and an attorney. His opinions are his own.