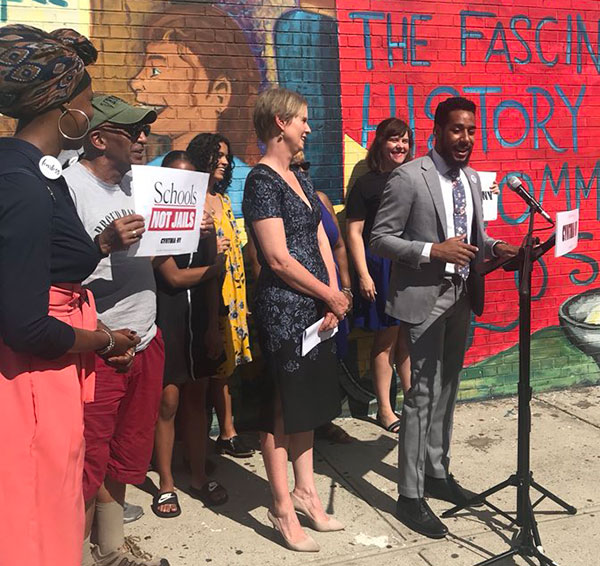 Last week, I endorsed Cynthia Nixon for Governor because her campaign is focused on making sure young people of color across New York thrive in school, rather than wither away in jail. As a City Council member from a predominantly black and brown community in Brooklyn, I constantly hear from young people who know what they need to succeed in school and what stands in their way.

Right now, there are more police in New York City schools than there are guidance counselors and social workers combined. What message does that send our children?

It is time to drastically change course in how we invest in the lives of black and brown young people. Talking to friends and allies across the state, the stories and experiences of the young people in my district are strikingly similar to those of young people across New York, from the Hudson Valley to Syracuse and beyond—because, while we can draw geographical lines to separate their school districts, it’s the color line that ensures they will all still be impacted by racially discriminatory school discipline policies and practices.

These policies have created a school-to-prison pipeline that afflicts young people of color across the State of New York. As Governor, Cynthia Nixon is committed to transformative policy changes to dismantle this system. That’s why a central part of her #SchoolsNotJails platform is school climate reform. Cynthia’s plan will push New York to lead the way by creating a Restorative Practices Training department within the State Department of Education to support schools in implementing restorative practices, introduce legislation to end school-based arrests for misdemeanors and violations, support schools to remove ineffective security measures, such as law enforcement and metal detectors, and only use suspensions as a last resort.

In New York State, there are over 500 suspensions per day and a disproportionate number of our young people being suspended are students of color. Statewide, one in five black boys are suspended from school each year; for black girls, it is one in seven. In New York City, black students are 27% of the population but nearly half of all students suspended; in Kingston they are 14% of the student body but 36% of all suspensions; and in Troy, they are 31% of the population but 61% of all students who are expelled.

These disparities begin in pre-kindergarten, where black students are 3.6 times more likely to be suspended from school. And they continue through high school and beyond—one suspension in high school doubles the likelihood that a student will drop out before graduation and it denies students from critical instructional time. Last year, students in New York lost 686,000 days of instruction because of suspension. If the school discipline gap continues, it’s no wonder that our state is struggling to close the graduation gap.

The young people I meet with are clear that the way forward is not to continue to “harden” their schools and rely on ineffective and harsh school discipline and policing, but to ensure equity in school discipline policies and practices and reimagine our approach to safety. There is no evidence that police officers and metal detectors make schools any safer, but there is ample research that shows they makes students feel less safe and result in more young people being pushed in front of police officers, prosecutors, and judges instead of guidance counselors, social workers, and school administrators.

Students feel safest in their schools not when they know technology exists that track their every move, or police officers do random checks and sweeps, but when they have staff trained in trauma-informed care, restorative practices, and youth development that are there to attend to their needs and create an inclusive environment.

Young people in my district are leading the way in demonstrating what safe and supportive schools can look like. Many of these schools are implementing restorative practices with real results -- dramatically decreasing suspensions and building strong school communities. This year my district saw one of the largest decreases in suspensions across the city. We can replicate this and transform schools into the safe and supportive learning environments our students and families deserve.

New York needs a public school system that is completely disentangled from the criminal justice system and a commitment that we are creating a nurturing and supportive environment for all students. This is the commitment that Cynthia Nixon is making. We need to invest in schools, not repeat the same policy failures that have led to our children ending up in jails.