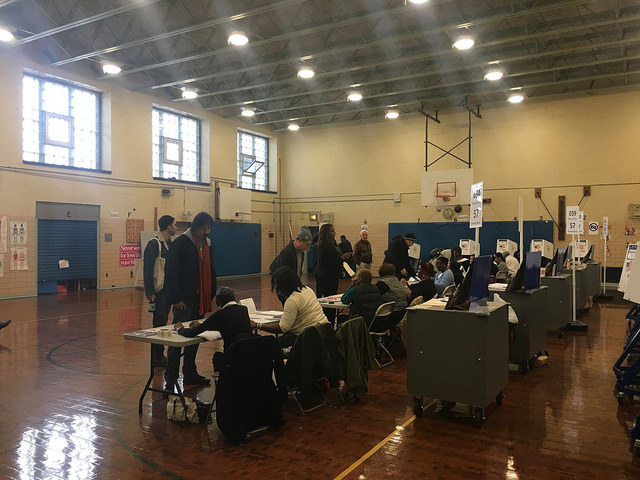 If the 2018 election cycle is any indication, voter turnout is on the rise. Now is the time to take advantage of this moment to keep voters engaged in the electoral system and really give them a voice.

One of the best ideas for promoting more diverse, open, and democratic elections is instant runoff voting (IRV). In New York City primaries, runoffs are forced for citywide elected positions when votes are split and no one candidate receives more than 40 percent of the vote. With IRV, voters rank candidates in order of preference. If no candidate wins with a first choice majority of 50 percent, the lowest vote-getters are eliminated, and the ballots where they were selected first are added to the next choice among the candidates advancing to the next round of the instant runoff. And so on, until one candidate hits 50 percent.

In 2013 – the last time a runoff was held, in the Democratic primary for Public Advocate – it resulted in an additional multi-million dollar election and a drastic decline in voter turnout to just 6.9 percent. And runoff elections are often made up of an older, whiter, and wealthier electorate. This is no way to run an election. Nor is accepting city leaders being elected with a low percentage of votes that negate the votes of the majority.

Given the recent election of Letitia James to the office of Attorney General, the public advocate is now vacant. More than 20 people have declared their candidacies, a list that seems to have grown daily for weeks. If the actual number of candidates on the February 26 ballot is anywhere close to 15 or 20, this special election we will likely see votes widely split among the candidates, ensuring that no one will win a majority of the vote. And while there would be no runoff based on city law (there are no runoffs in special elections), this election could nonetheless be a poster child in the case for instant runoff voting, which is also known as ranked-choice voting, giving more voters an actual say in choosing the next public advocate.

It should be noted that there will be another public advocate election this fall, where another crowded field could lead to a runoff, to fill out the rest of James’ term through the end of 2021. The winner of the special election is assured the office for the rest of this year only.

We will also have a environment in 2021 where ranked-choice voting will be essential. The races for mayor and comptroller are all but certain to be open, with no incumbent, and there will be another public advocate race, not to mention races for all five borough presidencies and all of the City Council. Those 2021 City Council elections, in which 36 current members are term-limited and all 51 seats up for election, will see a flood of candidates. Many races, especially the Democratic primaries, could see four, five, six, or even more candidates. Winners of a number of races may only have a plurality of the votes, unless we enact ranked-choice voting. And the citywide races could feature runoffs unless we act smartly in advance.

In 2018, the mayoral Charter Revision Commission reviewed policies that would make our city a better functioning democracy, among them, IRV. Despite widespread support, the commission bucked on the opportunity to put IRV on the ballot. It is disappointing that the commission missed this chance. Despite this, we have other avenues in which to institute IRV.

This session in Albany, I will be looking at how we can implement IRV through state legislation, engaging with my colleagues in both the Assembly and the Senate on why this policy is beneficial not only in saving taxpayer money, but also in helping us to elect candidates more representative of the city we live in, including more women and more people of color.

The 2018 Charter Commission’s failure to fully address IRV creates opportunity for action in Albany, and I expect to see people from all political sides coalesce around IRV as we move beyond whether or not it is a good idea to how, where, and when to implement it.

Instant runoff voting is used in major cities, such as San Francisco, Oakland, and Minneapolis, and this year Maine became the first state in the country to use it for congressional elections. We have allowed other states and cities to take the lead on smart and innovative voter reform while New York has stood by.

We are a city and state that often considers ourselves to be on the front lines of progressivism, but on voting reform, we often fall short. We should capitalize on the opportunities we have now going into future elections to ensure that all voices are heard and New York City and State stand up for democracy.