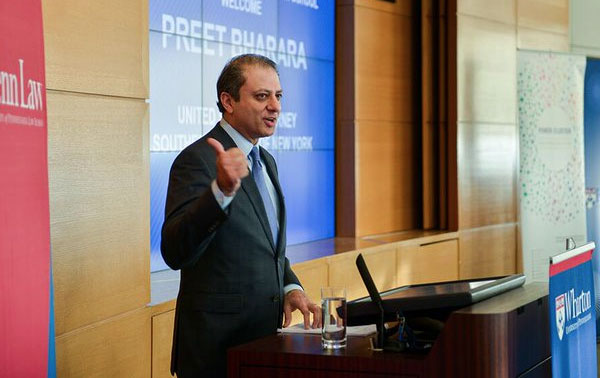 Former U.S. Attorney Preet Bharara has a new book entitled Doing Justice, which is designed to further establish his position within the “Trump Resistance” by playing up his commitment to the rule of law in the face of the politicized actions of the Trump Justice Department. In it he argues that there is no place for politics in the decisions about which cases to take on and how to prosecute them.

"Certain norms do matter,” Bharara writes. “Our adversaries are not our enemies; the law is not a political weapon; objective truths do exist; fair process is essential in civilized society.”

But this rhetoric of justice and legal formalism stands in sharp contrast to his role in prosecuting young people from the Bronx accused of being “the worst of the worst” as part of the Bronx 120 “gang takedown.”

In 2016 the NYPD and a variety of federal agencies conducted the largest mass arrest of alleged gang members in New York City history, rounding up 120 individuals. Then U.S. Attorney for the Southern District of New York, Bharara undertook the prosecution of those cases using the broad powers of the Racketeering Influenced Corrupt Organizations (RICO) Act. He alleged that these were hardened criminals who had created a vast criminal enterprise that was terrorizing their Bronx community.

Those arrested faced severe felony charges that caused almost all of them to accept plea deals after being held without the possibility of bail for up to two years.

A recent study of the outcomes of these 120 cases by CUNY Law Professor K. Babe Howell calls into question whether the interests of justice were served in these cases.

Howell’s report documents that after three years of court proceedings, 80 of the 120 were not convicted of a violent crime, a third of the defendants spent between zero and two years in prison, and 35 of those arrested were only convicted based on conspiracy to sell marijuana. She also found that almost all the defendants were eligible for a public defender, suggesting that these defendants had no financial resources despite supposedly belonging to a major “criminal enterprise.”

In fact, only around half of the defendants were ever even accused of being gang members. Nearly half of those arrested, including those facing the most serious charges, had already been convicted in state court for the same conduct; some were in prison or jail at the time of arrest.

On the other hand, in one case, Kraig Lewis was arrested in another state while completing a master’s program. He was beating all the odds. He had studied hard through college, as a scholar-athlete, playing basketball, running track, and making the dean’s list. In 2013, he graduated with a bachelor’s degree in criminal justice. He decided to enroll in an MBA program, and was excelling at it, all while paying it back to his community. He coached a kids’ basketball team and created and organized a “Stop the Violence” basketball tournament aimed at raising awareness of gun violence in inner city communities. And through it all, he was raising a young son.

In his final semester of grad school in 2016, on track to receive his MBA, Kraig was arrested in the Bronx 120 raid. The U.S. Attorney’s Office, headed by Bharara, argued that he should be detained without bail, even though he had no criminal record, and had never been in trouble. His classmates graduated, and walked the stage to receive their diplomas. Kraig sat in jail. His six-year-old son went to school without his dad to walk him there. He celebrated birthdays and milestones. He didn’t understand why his dad was gone.

Kraig is out now. He was given a sentence of time served for conspiracy to distribute narcotics (marijuana). But his life is not the same. He remembers seeing a friend stabbed in the neck while he was in jail. He remembers missing his son’s birthdays. He remembers how full of potential his life was, before the arrest. Even though he completed his MBA program through another school while in jail, his future is not the same. Not with a felony conviction.

These prosecutions were clearly political in nature. Bharara and then-NYPD Commissioner Bill Bratton went to extensive lengths to demonize the people arrested in the Bronx 120 raid and presented the public a false narrative that this and other such raids are the way to make communities safer.

Arresting large numbers of people because of their alleged involvement with marijuana dealing, re-arresting people already in prison to produce a show trial, and branding young people struggling to make a future for themselves with a felony record is not justice and it doesn’t create long-term safety for their communities.

Bharara was confronted with the accusations Wednesday night at a Brennan Center event at NYU Law School by the moderator, Margaret Hoover of Firing Line on PBS. He responded that he acted on the advice of the NYPD, whose officials argued that this was the way to respond to an acute crisis of violent crime. He also pointed out that there was community support for some of the other raids he prosecuted in Westchester County.

This defense doesn’t really get to the heart of the issue, and doesn’t match Bharara’s other rhetoric. Prosecutors are supposed to make independent assessments of what is going to produce real justice, not just take the word of the police or respond to the loudest voices in a community. And they certainly shouldn’t agree to broad-based sweeps as conspiracy indictments.

Bharara himself admitted that criminal justice-led solutions, whether directed at violence or Wall Street corruption are unlikely to be successful on their own. We need a more holistic approach that understands the limits of deterrence-based strategies.

This is exactly correct. Instead of relying on police to give us ever-larger groups of socially-networked defendants and putting them in prison for ever-longer sentences, we need to legalize marijuana, provide community-based violence reduction efforts such as Cure Violence, and invest in the lives of young people so that they have real pathways to economic self-sufficiency.

Preet Bharara claims to be “doing justice,” so it is time for him to admit that these mass raids and RICO conspiracy cases are unjust and that those arrested should be given clemency.

***
Alex S. Vitale is professor of sociology and coordinator of the Policing and Social Justice Project at Brooklyn College and the author of The End of Policing. On Twitter @avitale.