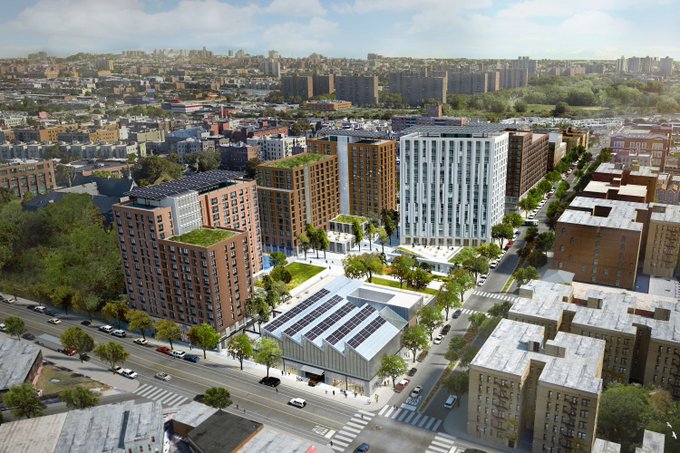 The Peninsula in the Bronx (rendering via @nycgov)

The lights were off and the countdown was on. “One, two, three,” over a hundred people called out until the lights on the Christmas tree flickered to life. With that, the Hunts Point holiday celebration was in full swing. Hot chocolate was served, pictures were taken with Santa, the Point’s youth choir sang carols, and gifts were given to the neighborhood’s youngest residents.

Last Friday’s celebration of community was a stark contrast to holidays past in Hunts Point. For the nearly 50 years it was in operation, the Spofford Juvenile Detention Center had been a blight on the community. The institution isolated the city’s youth rather than empowering them. And the dark and decaying structure sent a clear message to the community that this was a dangerous place.

Nearly a decade after Spofford shut its doors, we joined the Hunts Point community last week for an inaugural tree-lighting, celebrating both the start of the holiday season and a new, brighter chapter for the neighborhood. Working with the local community, we are transforming the Spofford site from a place of suffering into a celebrated community hub. The Peninsula will be a vibrant live-work campus that will include 740 affordable homes, open plazas, and ground-floor retail stores. And, to integrate this campus into Hunts Point’s robust manufacturing sector, there will be close to 50,000 square feet of light industrial space on site that will spark new manufacturing jobs. If Spofford was a symbol of neglect, the Peninsula stands for promise—more housing, more jobs, more hope.

From the start, local leaders and city agencies spearheading the redevelopment, including our offices at the City Council and Economic Development Corporation, the Department of City Planning (DCP), the Department of Housing, Preservation, and Development (HPD), and the Public Design Commission (PDC), recognized that Hunts Point residents had to be intimately involved with reimagining this site.

Early on, we hosted roundtables with local stakeholders and community groups -- including Bronx Community Board 2, Urban Health Plan, The Point, Hunts Point Alliance for Children, SEBCO, and Sustainable South Bronx -- about what should be built on the five-acre site. It was important for us to hear people’s priorities firsthand and identify needs the new development could meet. Following these conversations, we held information sessions in the neighborhood where over 100 community members voiced how they would remake the site. From these conversations, we developed a plan for the site that would address some of the neighborhoods most pressing needs, including a lack of open space, jobs, affordable housing, and access to quality food.

The next step for the plan was going through the public approval process. There was broad support at community board meetings, an affirmative vote by the Bronx Borough President, and detailed discussion by the City Planning Commission and then a vote to approve. This was followed by a hearing and a unanimous City Council vote. The constructive tone of discussions as this project advanced through the public approval process made it clear that the community felt heard during the planning phase. Hunts Point was ready to tear down this building and everything it symbolized to pave the ground for its future.

All of this rolls up into a blueprint for how best to engage residents in comprehensive and complicated redevelopment projects. Spofford’s evolution into the Peninsula highlights how we can do better by New Yorkers when these opportunities present themselves and continue to engage the community as projects take shape. On Friday, when Hunts Point came together at the holiday celebration, we marked a new era for the neighborhood and inclusive community planning in New York.