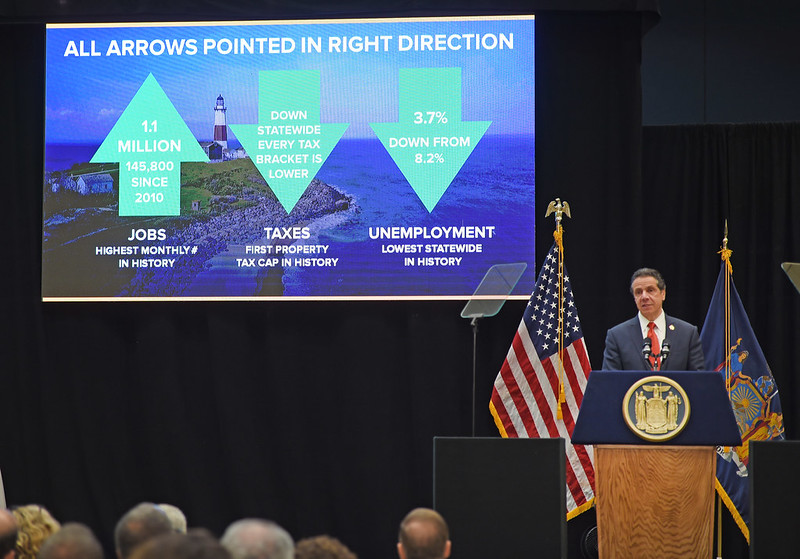 New York State and City are the gruesome public health epicenter of COVID-19, with horrific daily death tolls. The coronavirus is likely causing New York to also be the economic epicenter of the nation’s staggering job and economic loss, although those are statistics that will play catch up.

New York State’s fiscal year is April 1 to the following March 31, so the Governor and the Legislature just adopted a new budget (slightly late on April 3),  just weeks after the national shutdown in mid-March, leaving little time to determine how the virus would affect the state’s economy and tax revenue. Several federal bailout bills were passed before New York adopted its budget, but Governor Cuomo bitterly complained New York was badly shortchanged in those bills and was among those calling for a fourth such package with significant aid to states and localities.

The National Governors Association (Gov. Cuomo is the Vice-Chair) just asked Congress for another $500 billion for state governments alone, not even including local governments.

The adopted New York state budget recognized revenues would plunge with the declining economy, and set targeted painful spending reductions without specifying exactly what they would be. The Budget Director is supposed to establish a plan for the spending reductions. The State Legislature authorized the creation of processes for remote voting even as it passed the budget two weeks ago, so that it could continue to make decisions without returning to Albany. But where the budget is headed is still uncertain; what’s really needed is another federal bailout package.

The state budget authorized a reduction of $10 billion, or about 10%, from what had been the initially submitted Financial Plan for $105.8 billion in state operating funds, the core of the budget funded with state dollars. The spending reduction will bring State Operating Funds to $95.8 billion. Some parts of the budget were exempted from cuts, meaning other parts might have to take cuts larger than 10%.

Below is a table showing how that $105.8 billion was proposed in January to be distributed, in the column FY 2021 PROPOSED. The Financial Plan to be released after budget adoption has not yet been published, but the spending parameters will be similar to what was submitted. The $10 billion cut will have to be taken from the programs in that column. 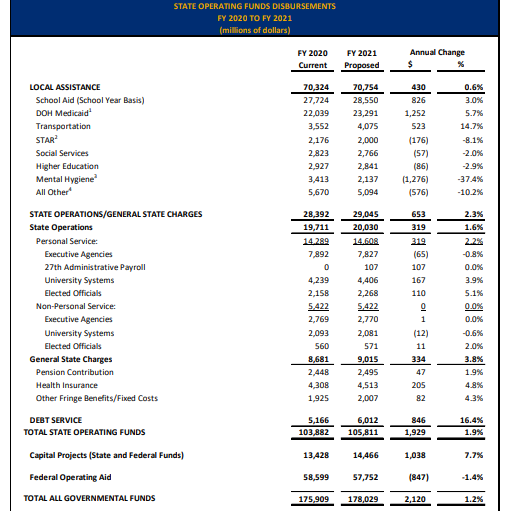 The State law directing the $10 billion reduction prohibits cuts to public assistance benefits and income supplements for the aged and disabled. It also prohibits cuts to debt service, contractual obligations, and spending pursuant to court orders or judgments. That means pensions and health insurance for state employees and retirees could likely also be exempt from cuts in the short-term, in addition to debt service and public assistance.

Spending in other vital areas, like pre-K to 12 education, higher education, Medicaid, social services like child care and child welfare, public safety, or transportation, could take the brunt of the cuts, to the extent funding is not backfilled by what has already passed Congress.

The $10 billion cut, however, is potentially just the first reduction. The budget permits the Director of the Budget to reduce spending again at three intervals over the course of the year, depending on how much revenue is coming into the State Treasury. The Legislature must receive ten days notice before any new cuts, and has that time to override them, by concurrent resolution of both houses. The new remote voting procedures would enable the Legislature to do that without returning to Albany. Robert Mujica, the budget director, estimated revenue losses could reach $ 15 billion, but nobody knows right now. If the economy declines further than the initial estimate, cuts could be even more severe.

Implementation Lacks Transparency, Budget Plan Should Be Disclosed Says Citizens Budget Commission
Critical decisions include how the federal bailout funds are used, what gaps remain after federal funds are used, and what the choices for cutting will be where there is no federal relief. There also probably won’t be one set of decisions, but many over a number of months.

Congress has already passed several bailout bills, which have included estimates of about $1.1 billion for education for New York and Medicaid spending relief estimated at $4.5 billion. A general state and local relief package included $7.5 billion for New York State, but the state government must share those funds with local governments and the share reserved for the state government itself was estimated at $3.1 billion. Separate appropriations for hospitals were also included in the federal bailout. But it’s clear these federal funds won’t make up for New York’s adopted cutbacks, let alone any new ones.

Below are several critical aspects of the state budget framework:

New York Medicaid Cuts Partially Adopted, But Postponed to Access Federal $
Governor Cuomo had set up a Medicaid Redesign Team at the beginning of the budget process to ratchet down exploding Medicaid spending, and on March 19 the team recommended $1.6 billion in cuts to and savings from the program. But the federal Medicaid relief package prohibited states from using the funds while cutting their Medicaid programs. The enacted state budget permitted the Division of the Budget to delay implementation of the Medicaid cuts to take advantage of the federal funds. But the federal financing expires in a year; right now the cuts would go forward next year, absent further changes.

Tax Filing Deadline Postponement Hurts New York Cash Flow; Budget Allows $8 Billion in Borrowing and $3 Billion Line of Credit
In April 2019, according to New York State Comptroller monthly cash reports, New York ran more than a $6 billion surplus in its State Operating accounts, primarily due to the April filing of New Yorkers’ tax returns. But New York will not have that luxury now. Federal and State tax return filing deadlines have been delayed from April 15 until July 15, putting New York’s cash flow into a precarious condition and delaying critical information on revenue to the state’s leadership.

The economy’s downward plunge cannot be tracked with normal tools. A decision to borrow up to $11 billion is mind-boggling, but essential to avoid a collapse of New York’s government and a good decision. The budget permits the short-term borrowing to be extended next year, or even converted into a long-term borrowing, which would be tantamount to borrowing to pay for operating expenses, a bad practice but we are in an emergency and interest rates are very low.

What’s Missing? Public Disclosure in Real Time
The state budget over the next several months will undoubtedly be a series of halting and difficult steps with no easy decisions. But the public deserves a regular process of disclosure of what choices are being made step by step. That includes state cuts, federal backfills, and state borrowing.

The adopted Financial Plan is not yet even public, and normally there would be a 1st quarter update released sometime after June 30 (the end of the 1st quarter). Last year the 1st quarter update was not released by the Division of the Budget until August. But now critical decisions will be ongoing within a few weeks and continue for months. The Governor and the Division of the Budget have an obligation to disclose such vital information in real time, not after the fact. If the situation improves and cuts can be restored, that will be good news.