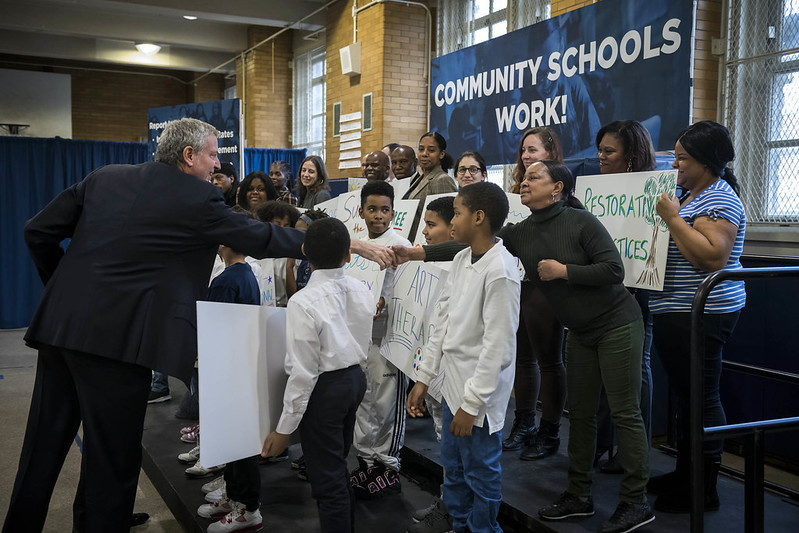 As New York City prepares for a return to school, city leaders are once again turning to community-based organizations (CBOs) to play a central role in supporting the reopening of schools. This is understandable. CBO partnership has always been a pivotal cornerstone of success for our young people and families and it is again critical to the success of all of these reopening plans. But recent, deep financial cuts to the sector – and the potential for further cuts – makes this untenable.

The nonprofit sector's capacity has been stretched by the need to quickly build entirely new program models that prioritize the health and safety of children and staff during the coronavirus pandemic. And earlier this summer, on the evening of the last day of the city’s most controversial and volatile budget process in decades, education advocates learned at the last minute that the city’s flagship Community Schools Initiative had been cut by $9.16 million, impacting nearly 30,000 students, their families and communities.

This decision was made without the opportunity for the Council or the public to weigh in about their impact. The de Blasio administration's lack of transparency with these cuts was an egregious display of abuse of the powers of mayoral control of city schools.

New York City’s Community Schools, which provide a range of social services in the school setting, have been identified by city and state reopening councils as an intrinsic element to the school reopening plan. As the Department of Education (DOE) prepares to execute a new learning model for the upcoming school year, the Community Schools network is an integral part of the process and the chances for success. However, the DOE has yet to inform community school providers how the $9.16 million cut will impact programming and services.

Additionally, the DOE has failed to inform community school providers of the role we will play in meeting the child-care needs that will result from the blended learning model. Meanwhile, Governor Cuomo recently announced that more cuts to school aid across the state are coming, which would cut $2.4 billion from New York City schools. Last week, City Schools Chancellor Richard Carranza warned that 9,000 DOE jobs will be lost and all schools would need to go remote if the state decides to make these cuts. Schools cannot afford to lose the resources and support that CBO partners bring to the schools they work in on top of this.

Throughout this pandemic, the human services sector, including Community Schools, continued to provide crucial services for the hardest-hit communities, such as meals, trauma care, and support for parents, including with their children’s remote learning. These services have been and will continue to be critical to address the learning loss and trauma New York City students and their families are facing. The mayor’s own Education Sector Advisory Council emphasized how critical services provided by Community Schools will be in the new school year.

These cuts, which caught City Council members off guard, were implemented with no input from the communities they will impact. Mayor de Blasio and the DOE have circumvented a public, transparent due process – sending a devastating message to thousands of working families, especially in communities of color that were most impacted by COVID-19.

The rate of COVID-19 deaths in the city’s communities of color and low-income zip codes is many times greater than in wealthier, whiter areas. Community Schools disrupt the oppressive patterns of systemic racism that perpetuate de-prioritization and underinvestment in economically distressed communities. They level the playing field so that all children in New York City can have a better chance to thrive and succeed.

Restoring trust with families is a key piece of reopening schools successfully, but glaringly missing from the list of engaged stakeholders are the CBOs charged with providing in-school and out-of-school services. Among them are the community school providers who have developed deep community trust and developed expertise in running a blended model of learning in the Regional Enrichment Centers the city opened during this pandemic. The mayor and DOE should consider CBOs as an equal partner and leverage the trust they have built in communities and their expertise to successfully reopen schools.

Students, families, and communities need more resources, engagement, and equitable, collaborative partnerships now more than ever. Smart and swift investments must be made to support the provision of these resources, especially in our most vulnerable communities.

The community schools strategy presents the most cost-effective and evidence-based approach to reopen New York City schools in a way that centers students’ physical, emotional, and mental safety and well-being. To cut these services at a time when they are needed the most is unconscionable.

It’s just weeks from the start of the school year, and we’re still in the dark. If reopening schools, whether in-person, remotely, or blended is a priority, the mayor and Department of Education must restore this funding now.

***
Terrence Winston is Coordinator of the Coalition for Community Schools Excellence. On Twitter @CoalitionforCo2.