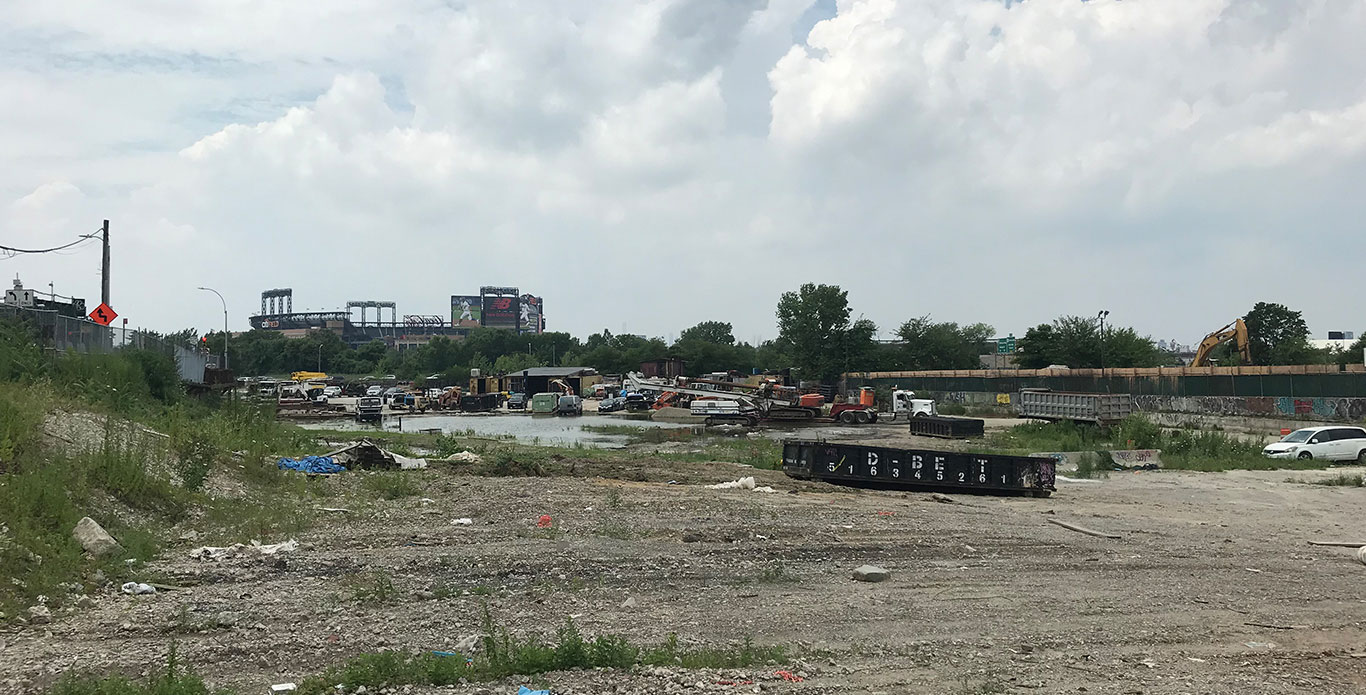 One part of the Special Flushing Waterfront District site

Flushing residents, local environmental organizations, and nonprofit groups have long despaired over Flushing Creek. The waterway has been a symbol of environmental racism and community disinvestment for many years; it frequently runs cloudy and sulphurous with industrial waste and sewage overflow.

In 2016, local environmental organizations Guardians of Flushing Bay and the Riverkeeper released a vision plan for an integrated and ecologically healthy waterfront. Activists, community residents, and the Flushing Rezoning Community Alliance also published a plan that prioritized the needs of existing residents and discussed safeguards against displacement. Both of these plans were created after many representative community meetings and envisioned a neighborhood free from air and noise pollution, with a clean creek and community resources like senior centers and public parks.

What Flushing residents may receive instead is a massive luxury development proposal driven by the monetary interests of real estate developers F&T Group, United Construction and Development Group Inc, and Young Nian Group. The Special Flushing Waterfront District would be a huge mixed-use development hosting over 1,700 luxury condos, a hotel, retail spaces, and a privately-managed “public” waterfront. None of the community resources supported by locals in previous plans have been incorporated into the proposal. Moreover, the imagined “public” waterfront has the authority to limit access to locals.

Familiar Promises Waiting to be Broken Once More
In 2013, City Council Member Peter Koo approved F&T Group’s bid to purchase Municipal Parking Lot 1 for a severely discounted price. Koo also supported a number of tax benefits and special permits that loosened height restrictions and setback regulations (the minimum required horizontal distance between the sides of a structure from the property line). In return, F&T agreed to build affordable housing units and space for a YMCA in the proposed Flushing Commons, which was built on top of Municipal Parking Lot 1.

Since 2013, F&T has completed Phase 1 of Flushing Commons, constructing two apartment buildings featuring prime office condominiums, luxury apartments, retail spaces, and a new 982-space parking garage. The promised YMCA, publicly accessible spaces, and affordable housing units are scheduled for construction in Phase II. Under the false pretense of community benefit, F&T has only intensified the problems of displacement and crowding in Flushing. In recent years, Flushing has lost many affordable housing units and rent stabilized units because of persistent rezoning and luxury development and existing units face continual threats.

Environmental Racism in Flushing
Like many low-income communities of color, residents of downtown Flushing must live with higher rates of air, water, and noise pollution than their whiter, wealthier neighbors. A 2019 Union of Concerned Scientists report states that "Asian American residents are exposed to twice as much PM2.5 pollution (fine, inhalable particles) as are white residents [in New York].” Furthermore, this type of pollution “is the largest environmental health risk factor in the United States, responsible for 63 percent of deaths from environmental causes (Tessum et al. 2019; Tessum, Hill, and Marshall 2014).” Earlier this year, Mayor Bill de Blasio’s Better Buses Restart Plan noted that the intersection at Main Street and Roosevelt Avenue in Flushing was the third busiest pedestrian intersection in the city. These traffic jams contribute to the noise and air pollution that harm the health of Flushing residents.

"People cannot breathe anymore because of the numbers of cars [passing by] and construction being done everywhere," Jay Kim, a resident of 3733 College Point said. "During the Tangram House South construction, I would not dare to open the window even in the hot summer when I am cooking. From my kitchen window, industrial debris was coming in constantly…the outside looked hazy with dust."

With Flushing intersecting numerous flight paths to LaGuardia airport, the rise of condominiums like Flushing Commons and the proposed Special Flushing Waterfront District project stand in direct violation of Federal Aviation Administration height restrictions. This is yet another way the rezoning proposal is a mismatch for the community. These restrictions exist to protect the quality of human lives, yet developers like F&T have attempted to sidestep the FAA  height restrictions with waivers on numerous occasions in hopes of building higher towers. "Planes fly very close to the ground in Downtown Flushing…and make a lot of noise. I cannot even open the door in the summer,” Kim said.

Flushing locals hope that the planned development will not cause them to relive the nightmare they endured in 2016 when Sky View Mall was constructed. During that time, nearby NYCHA Bland Houses public housing communities suffered from environmental harassment and rat infestations. Tenants reported giant rats in the courtyards, garbage disposal rooms, and hallways. Enduring the seemingly endless cycles of construction in an already polluted environment is an ongoing source of indignity and pain.

“Where is the remedy?” Kim asked. “Why do we need to suffer the consequences of someone's greed? When the rezoning is approved and construction starts, it will be even worse than before considering the magnitude of the construction."

In addition to environmental pollution, Flushing Hospital’s 2019 Community Health Needs Assessment found that effects of poverty continued to impact their patients’ health. In short, Flushing residents face health impacts from pollution related to environmental racism and poverty as these systems of oppression reinforce and escalate each other’s consequences.

Green Gentrification and Displacement
This rezoning and development are embedded in economic structures and personal choices that promote money-making condominium developments without regard for local residents. Particularly in communities already suffering environmental injustices, luxury housing will lead to economic displacement. In an interview, Assistant Professor Lara Cushing at U.C. Los Angeles noted that “racism doesn’t only operate at an interpersonal level. Our society was set up with laws and zoning practices that maintain segregation. The whole system is not designed to bring about equality.”

The developers promise to bring “environmental cleanup to a vacant, blighted parcel of land” but do not incorporate provisions to protect existing residents from being displaced by the increased property values that come hand in hand with amenities like a usable waterfront. Urban greening and climate resilience projects play a pivotal role in the history of displacement in New York City. A 2019 research study found that the establishment of new greenways near historically disinvested neighborhoods – like the Flushing waterfront – are particularly strong predictors of gentrification. The authors say that parks can “trigger” and “foster” displacement.

Audrey Cho, a junior at local high school Townsend Harris asked, “How could one expect luxury developments to benefit a community where nearly 60% of residents are rent burdened? How will commercial properties serve a town where countless are waiting for food each week, businesses are shutting down, and families are facing eviction?”

A Better Flushing for All
The risk of ‘green gentrification’ causing displacement and health issues more than justifies careful development planning with close community coordination. However, this is not what has happened. A negative declaration on the Environmental Assessment Statement (EAS) prevented the additional public hearings that are required for a final environmental impact statement.

Rushing this rezoning and development will have consequences for Flushing residents’ health and environment. Real questions about the development plan remain insufficiently answered. For example, the EAS includes plans to remediate soil for the construction areas. However, the site is not continuous, the U-Haul building sits between proposed developments. Longtime resident and community activist Bobby Nathan sums up the community fear that, “if the U-Haul site is not cleaned up, it will re-contaminate both sites. It's just a waste of time and money.”

Residents ask why they should endure the construction of apartments they cannot afford or support the remediation of a park they may not have full access to. Downtown Flushing communities, composed primarily of immigrants with limited English proficiency and low-income people of color, are being forced to bear the burden of this rezoning project without being allowed to provide any input. This proposal imposes a solution rooted in environmental racism onto a community already facing negative health impacts from their polluted environment.

Flushing residents desperately want a clean creek and usable waterfront. However, this already-vulnerable community should not accept displacement as the price they must pay for this environment.

***
Zander Pellegrino, Seonae Byeon, and Jane Wang are volunteers with the Flushing Anti-Displacement Alliance, a volunteer group of workers who have roots in Flushing and oppose the Special Flushing Waterfront District Rezoning. On Twitter @Flushing_ADA.