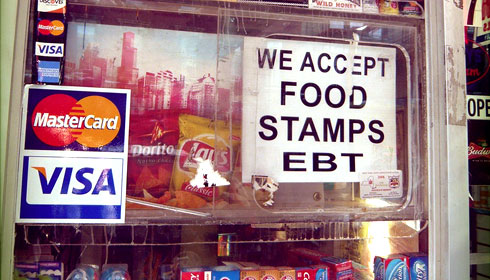 As jobs disappear and bank accounts dwindle, more and more New Yorkers are relying on food stamps to put a meal on the table. As of February, more than 1.39 million New York City residents -- nearly 800,000 households -- were enrolled in the federal government's Supplemental Nutrition Assistance Program, as food stamps are officially called.

These people also will see an increase in the size of their benefits, thanks to the federal economic stimulus package, Mayor Michael Bloomberg announced last week.

But even though New Yorkers now will collect more than $200 million in food stamps every month, hundreds of thousands more city residents may be eligible for benefits but not receiving them. Despite the city's efforts to spread the word about food stamps and improvements to the application process, anti-hunger advocates say too many barriers still remain for New Yorkers who need help feeding themselves and their families. Meanwhile, the system is showing signs of strain under the heavier caseload, as some applicants have to wait beyond the legal time limit for their benefits.

According to New York City's Human Resources Administration, the demand for food stamps has grown steadily under the Bloomberg administration. Since 2002, the number of New York City residents on food stamps has grown by 74 percent, even as enrollment in federal welfare programs that pay cash -- like the Family Assistance Program and Safety Net Assistance -- has declined, partly because of more stringent requirements. In 2008 alone, the city enrolled 200,000 new food stamp recipients who did not receive cash assistance.

Anti-poverty advocates say that as many as 700,000 more New Yorkers could be getting food stamps but won't apply because they don't know they are eligible, they fear being stigmatized, or they feel the benefit isn't worth the frustration -- and sometimes humiliation -- of the application process. Advocacy groups report that some workers in the city's food stamp offices routinely dole out shame along with the benefits.

Community-based organizations and advocates have been working with the city to add eligible residents to the food stamp rolls, and the Human Resources Administration last year launched some focused outreach campaigns. The city targeted working families, some of whom may not have realized they were eligible for food stamps, and Medicaid recipients. It also issued multilingual informational brochures in an effort to reach more immigrants.

Despite all that, Leslie Annexstein, director of the Urban Justice Center's Homelessness Outreach and Prevention Project, said the city could do more to get the word out, particularly to immigrants.

"The applications are available in many different languages but the support materials are still just in English and Spanish," Annexstein said. "There's a significant proportion of our clients who speak Chinese, and there's definitely a hole in HRA's ability to communicate with Chinese speakers in this city. That's a big population who need to be getting food stamp benefits."

Food stamp offices employ some new practices designed to make it easier for the city's working poor to enroll and then be recertified when the initial benefit period runs out. In the past, anyone seeking food stamps had to apply in person at one of 20 outlets spread over the five boroughs, and applicants sometimes had to wait for hours before they could see a counselor. Now, according to human resources deputy commissioner Seth Diamond, many people can apply over the telephone and simply mail in the required papers. This saves them from having to take precious time off work and lose a day's wages.

Despite this, advocates still get frequent complaints from applicants about how much time they have to waste at the food stamp office.

Applicants who visit certain soup kitchens or food banks can also apply online from computers at those facilities, thanks to a federally funded pilot program by the city and the New York City Coalition Against Hunger. City Councilmember Eric Gioia has called on the Human Resources Administration to speed up its efforts to implement a wider online application system.

Some community groups applaud the city's actions but say they do not go far enough. Community Voices Heard, a grassroots organization of low-income people, recommends putting "help desks" in welfare offices, staffed by volunteers from anti-poverty groups. Such desks, they say, would help answer the myriad questions applicants have about eligibility, work requirements and documentation, and could even provide on-the-spot translations of agency letters and brochures. Such "help desks" existed decades ago, until then-Mayor Rudolph Giuliani outlawed them by executive order.

New York City Public Advocate Betsy Gotbaum is sponsoring, for the second time, a bill in City Council that would reinstate the help desks, but the Bloomberg administration, which successfully fought the proposal several years ago, is again standing firm against it. Barbara Brancaccio, human resources' deputy commissioner for public information, describes the bill as a "red herring." She said that nothing bars applicants from arranging ahead of time to have an advocate accompany them to a benefits interview, but that permanent help desks might disrupt food stamp offices. Further, Brancaccio said, the city is worried that it could be held responsible for the accuracy of information given out by the volunteers staffing the help desks.

Another bone of contention is the requirement that every applicant -- and every adult in the applicant's household, regardless of employment status -- must show up in person for finger imaging, an anti-fraud procedure that captures the applicant's digital fingerprint.

Joel Berg, head of the Coalition Against Hunger, says there are more effective deterrents to fraud, as evidenced by the 46 states which do not require finger imaging of their food stamp applicants.

"What finger imaging prevents is by far the least frequent kind of food stamp fraud, where people actually create duplicate cases," Berg said. "I mean, it's so hard to get food stamps in the first place. So many people are eligible and not getting them, the notion that people are creating false identities is a little Hollywood."

But the city has not been swayed. "I think there is tremendous public support for food stamps and for making the program easier, and that's very helpful to us, but that public support would erode very quickly if taxpayers thought that there were people getting benefits who were not eligible, " Diamond said.

New technologies also are helping the city handle the growing food stamp caseload. Food stamp offices became fully digital in 2008, Diamond said, with computers and scanners taking the place of paper forms and photocopies. The so-called "paperless office system" is designed to improve accuracy, speed enrollment and recertification, and reduce the agency's workload. Earlier this month, Gotbaum released a report sharply criticizing the system for frequent breakdowns, based on a survey of workers who use the computers and scanners.

Agency officials quickly dismissed the report for its flawed methodology -- fewer than 7 percent of the workers completed the survey. According to Brancaccio, the city's records show that workers used the paperless office system 95 percent of the time during the months covered by the survey, October and November, and only rarely resorted to the old paper-based methods.

"On top of that, we registered something like 52,000 applications in the food stamp program in those two months alone," Brancaccio said. "We could have not absorbed the huge numbers that we have if we didn't have a functioning system."

The Wait for Benefits

Those numbers mean that more cash-strapped New Yorkers are able to eat, and more federal dollars are being funneled into the city's economy through the bodegas, corner stores and grocers that take food stamps. The average monthly food stamp benefit for a family of three is now about $150, and every food stamp dollar spent has an economic impact of $1.70, according to the city comptroller's office.

But the increased caseload may have exacerbated delays. Under state and federal law, a person must begin receiving benefits within 30 days after the city receives the application -- within five days in the neediest cases. A year ago, the administration settled a class action lawsuit in federal court brought by food stamp applicants who had not received their benefits on time. The city agreed to comply with the time limits and make periodic reports showing compliance.

Now, attorneys for the plaintiffs in that settlement say that the city's own reports indicate that it still is late in issuing benefits to roughly a quarter of its applicants. They would not say, however, how late the benefits generally were.

"We tend to measure the data as 'late or not late,'" said plaintiffs' attorney Marc Cohan, director of litigation for the National Center for Law and Economic Justice. "Our view, of course, is that when people are hungry, even a day late is one too many."

Diamond said that given the changes in food stamp offices' procedures and the spike in caseloads, the resulting stress on the system is "only natural," but the agency is working to shorten the wait times.

Anat Gerstein, senior advisor to the Public Advocate, said that her office gets calls every day from people who are caught up in bureaucratic red tape at the food stamp office. She and others worry the situation could get worse as the recession continues.

"More people are going to need food stamps to put food on the their table. This is going to put more pressure on HRA to process more people, and they can't process the people who are walking through the door now," she said.

Diamond does not agree with that assessment, but he is aware that the demand for his department's services has increased at a time when all city agencies are scraping for diminishing resources.

"We remain somewhat optimistic that the stimulus bill, or some other changes, will help," Diamond said. "But in the short run, we're looking at continuing the trends."

"It certainly is a challenge."