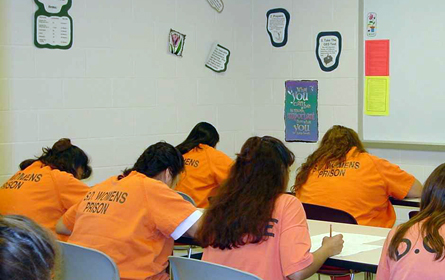 Davian Reynolds was four years old when he first got to know his mother, Tina Reynolds. "She was the lady who let me jump on the bed," he remembered. At his foster parents' home he wasn't allowed to jump on the bed.

For the early years of Davian's life Tina was in prison serving time for a parole violation, first at Rikers Island and then at Taconic Correctional Facility in Westchester County. A group there helped her arrange visits with Davian and her other son. Tina says getting to know her son and becoming a mother again allowed her to adjust to life outside of prison.

Over 70 percent of women in prison in New York are mothers, and advocates say most of them had been their children's primary caregivers. As of January 2008, more than 44 percent of women imprisoned in New York State were from New York City. About 11 percent were from its suburbs. Mothers from New York City serving time in upstate prisons have to overcome great distances to maintain a relationship with their children.

Since her time in prison Tina has become involved in social work and founded WORTH (Women on the Rise Telling HerStory), a group of formerly incarcerated women who work on issues facing women who have served time. Davian, now a thoughtful but slightly shy teenager living in Brooklyn, occasionally travels with his mother to advocate for helping imprisoned mothers sustain the bond to their children. Davian also posts a video blog, where he discusses being a child with a parent in prison. On Tuesday the two were in Albany with hundreds of formerly incarcerated women and other advocates to ask legislators to consider bills that they say would help give incarcerated women a better chance to recover their lives.

Tina and Davian's account was just one of hundreds of stories that were presented to legislators in the hope that they might encourage them to pass the legislation. The Coalition for Women Prisoners organized the lobbying event, and Serena Aliferi, the associate director of policy for the Women in Prison Project, said that she and her colleagues are hopeful that this year the legislature finally will act on the bills. In light of the legislature's reform of the Rockefeller drug laws and the Democratic control of the Senate, advocates think this is the year their legislation will finally be signed by the governor.

Those supporting the changes say that, as the number of women in prison in New York has exploded, the state has failed to address issues that destroy the lives of incarcerated women. They point out that in 1973 around 380 women were in correctional facilities in New York State. Today there are more than 2,600, an increase of 580 percent.

Advocates are focusing on three bills pending in the legislature. The first, which is dear to the Reynolds, is the Adoption and Safe Families Act Expanded Discretion bill. It would give local child welfare agencies more discretion before terminating parental rights when a parent is away for an extended term in prison or for drug treatment. That bill has passed the Assembly where it is sponsored by Jeffrion Aubry of Queens and in the Senate by Velmanette Montgomery of Brooklyn. (For more on women prisoners whose children end up in the foster care system, see A Tangle of Problems Links, Prison, Foster Care

The second, the Domestic Violence Merit Time Bill, would allow victims of domestic abuse who have been imprisoned for defending themselves from or lashing out at an abuser to qualify for time off of their sentences. The bill has been sponsored in the Assembly by Helene Weinstein and in the Senate by Montgomery. In previous years, the Domestic Violence Merit Time Bill was sponsored by Republican Sen. <http://www.senatorvolker.com/59/default.aspx>Dale Voelker. Representatives of the Coalition for Women Prisoners say that Voelker has indicated he might co-sponsor the legislation this year.

The third bill, The Department of Health HIV/Hepatitis C Oversight Bill, would ensure that the <http://www.health.state.ny.us/> Department of Health monitors the treatment delivered to prisoners infected with HIV or hepatitis C. Currently, the health department does not oversee health care services provided in prison to make sure they meet the same standards of care required of other providers New York. Advocates say that, while the bill isn’t specific to women, if passed, it would open the door for the health department to monitor other medical services provided in prison, including childbirth.

Sick and in Prison

Of the hundreds of advocates who traveled to Albany to tell their stories, Russelle (Rusti) Miller-Hill delivered perhaps the most striking account. Miller-Hill began using drugs after she was diagnosed as HIV positive. She was eventually arrested and sent to an upstate prison.

Sen. Thomas Duane said that hearing stories like Miller-Hill's when he traveled to prisons across the state spurred him to work for the prisoner health bill. "I couldn't forget their specific stories. I couldn't forget what they had told me," said Duane.

Erik Kriss, a spokesperson for the state Department of Correctional Services said that his agency is "not in favor of the arrangement," of having the Department of Health monitor the standard of care provided to prisoners. "Inmates have the constitutional right to healthcare and we provide it," said Kriss, "and we do a good job." (For more on health care in prisons, see Barred Medicine: Health Care on Rikers Island.)

A Cycle of Violence

The Domestic Violence Merit Time Bill had special significance to a number of women who attended the rally on Tuesday. Sharon White served 11 years in prison for manslaughter. "My ex-husband was an abuser," said White. She believed "the incident that lead to my imprisonment was an indirect result of domestic violence," but said she does not think that was taken into account when she was sentenced.

"Women get all this prison time, yet we fail to acknowledge that the system failed them before they even got to that point," she said. "They didn’t look at the background to see that I was in a horrible relationship that I had to get out of."

White is now remarried and works in social service. She volunteers her time helping women who suffer domestic violence. If the merit time bill was law when she was serving time, White said, "I'd have been given a chance to rebuild my life sooner. I would be a lot further now. But I am very happy with who I am today."

According to the Correctional Association of New York 80 percent of women in prison were physically or sexually abused as children, and 9 out of 10 women in prison have experienced severe physical or sexual abuse in their lifetimes. Sister Mary Nerney, who founded STEPS to End Violence, a program that deals with domestic violence and visits women in prison, said the current system does not serve women well: "It doesn't make sense. We need to look at how we can help families stay together."

Women who have been abused by their spouse say they often do not leave for fear of what could happen to their children or themselves if they call the police. When they strike back, they say, they had finally reached a point where they needed to protect themselves.

Advocates insist women who show remorse and good behavior should be allowed time off their sentences so they can go about repairing their lives and sustaining their families. They note that women sentenced after reacting violently to years of abuse have a zero percent recidivism rate.

"Women who are incarcerated for defending themselves against a batterer or for committing crimes because of domestic abuse pose no threat to public safety," said Assemblymember Weinstein in a statement. "Merit time would allow survivors of domestic violence in prison to return to their children, families and communities and begin to rebuild the healthy and safe lives denied to them before incarceration."

Kriss said the corrections department does not comment on pending legislation but he noted that Commissioner Brian Fischer believes women who were victims of domestic abuse and who were imprisoned for an incident relating to their abuse "should have the opportunity to earn some good time." Kriss pointed to a measure included in the budget that allows well-behaved inmates who are not sex offenders or convicted of first degree murder to earn six-month credits off their sentence. The inmate must also reach a significant milestone like completing two years of college or an apprenticeship.

White said she knows that some legislators and critics see women such as herself as ordinary criminals. "To them a crime is a crime," she said, and they will oppose any move to reduce sentences. "I'm not trying to take away from what I did," said White but she added people just need to better understand how domestic violence affects the battered person and their children. "It"s just not an issue for some people until they are in the situation or they hear about a situation someone went through."

On Tuesday evening advocates gathered in a church on State Street in Albany. Women talked about the experiences they had earlier in the day sharing their stories with legislators. White said she got a pleasant surprise when she turned around to realize that the assistant to one of the legislators was previously her cellmate. "I thought she was just a legislator's assistant but I saw her and realized she was one of my cellmates. I said it just goes to show how far we've come," said White.

In the front of the church speakers congratulated each other and read poetry. At one point a choir took to the microphone and led the room in a chant, clapping and singing, "Ladies, are you ready for a change?"