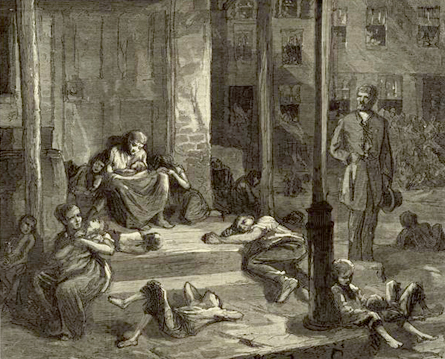 Mayor Michael Bloomberg’s poverty commission (officially called the Commission for Economic Opportunity) released its long awaited report on September 18, with a slew of statistics and recommendations about confronting poverty. Below, a dozen responses, which offer a glimpse at some of the many kinds of New Yorkers who are poor:

David Jason Fischer of the Center for an Urban Future approves of the commission's focus on young adults, arguing that moving these young adults into steady jobs will not only help them stabilize their lives, but fill a major economic need as well. (Read More)

A Blueprint for Children

With 50 percent of all children in New York being born into poverty, the mayor’s plan provides a good blueprint for addressing the problem, writes Donna Lawrence of the Children’s Defense Fund. The key, though, is how he fills in the details on health insurance, childcare and other important issues. (Read More)

Urban anthropologist Katherine Newman discusses how many fast food workers â€“ one of the archetypical jobs for the working poor â€“ were able to work their way from poverty to the middle class â€“ and why those who couldn't do so failed. (Read More)

Heather MacDonald of Manhattan Institute's City Journal urges the government to concentrate on the few things it can do -- creating rigorous, demanding schools and safe streets --, and stay away from things beyond its capacity, such as forcing people to be responsible parents. (Read More)

Public assistance recipient Ketny Jean-Francois argues that any response to poverty must explicitly deal with getting New Yorkers on welfare into stable jobs. (Read More)

Keeping People Out of College

Higher education can help people get out of poverty but, writes Lynne Weikart of Baruch College, a number of barriers, from high tuition to welfare rules, keep New Yorkers out of college. (Read More)

Poverty Among the Elderly

Seniors in New York City are more than twice as likely to live in poverty as the elderly across the country, writes Bobbie Sackman of the Council of Senior Centers and Services of New York City. She explains why and proposes some steps that could be taken to address the problem. (Read More)

From Foster Care To Poverty

"Aging out" of foster care often leads to a life of poverty. For that to change, argue Betsy Krebs and Paul Pitcoff of Youth Advocacy Center, the foster care system must change. (Read More)

Immigrants and the Language Barrier

Over half of the city's immigrants at either impoverished or near poor. The major issue that needs to be addressed, writes Chung-Wha Hong of the New York Immigration Coalition, is the language barrier. (Read More)

The High Cost of Credit

Public Advocate Betsy Gotbaum praises the mayor for confronting poverty, but says the issue of funding must be addressed, and public benefits and programs for single mothers should be added as the commission's strategy is implemented. (Read More)