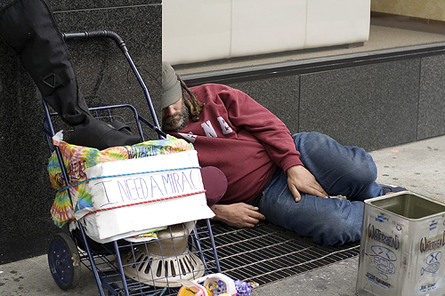 New York City officials have declared an ambitious campaign against poverty, but they must also put together a fuller picture of the effects of poverty in the city, according to Lawrence Aber, a member of Mayor Michael Bloomberg's Commission for Economic Opportunity, which last month released its report, Increasing Opportunity And Reducing Poverty In New York City. Aber, a professor of applied psychology at New York University’s Steinhardt School of Education, co-chaired the commission's “work group on data evaluation.” He chatted recently about the shortcomings in the current methods used to measure poverty, and about how to determine whether the city’s new anti-poverty efforts are succeeding:

THE SHAPE OF POVERTY IN NEW YORK CITY

GOTHAM GAZETTE: In its report, the Commission for Economic Opportunity says it wants to work towards developing a "more nuanced picture of poverty and well-being as experienced by New Yorkers." What don't the statistics we currently use tell us about poverty in New York City?

LAWRENCE ABER: The main statistic that the city and the nation use is the percentage of people in households with incomes below the federal poverty line, which is now $19,800 for a family of four. That official poverty measure has a lot of flaws. The main one is that it doesn't take into account differences in what it takes to live compared to what it took in the 1960s...

A second problem is that it doesn't account at all for regional differences in the cost of living. It's the same federal poverty line in Biloxi, Mississippi as it is in the Bronx. It doesn't stand to reason that a dollar goes as far in New York as it does in Biloxi.

The third big problem is that it is a measure purely of income poverty, and it doesn't include measures of families' wealth, assets, or debt. Imagine you're making $19,800 and you own your own house, car, and vegetable patch, and you don't have credit card bills. Then imagine you're making $19,800 and you don't own your own house, car or vegetable patch, and you've got extensive debt. The poverty line can't distinguish between those two families, and the second family is much more economically stressed than the first family.

The final problem is that [we] measure the percentage of people below a cutoff instead of some kind of continuous score. It doesn't stand to reason that someone who makes $10 above the cutoff is wealthier than a family that makes $10 below the cutoff.

GOTHAM GAZETTE: So do you think that the commonly cited figure that 1.5 million New Yorkers live in poverty is an understatement?

But the official line would be much higher today if the original methodology [were reapplied]. That was based on studies that showed that it cost about a third of a low or moderate family's income to feed four people adequately back then. Now food costs less than 15 percent of a family's income. There are other expenses that are much, much higher: transportation costs for going to work, health care costs, childcare costs to be able to work. If you total up in price what on average it costs to provide minimally adequate food, shelter, clothing, basic expenses, for a family of three in New York City, Wider Opportunities for Women estimates that it costs over $40,000 to reach what it calls family economic self sufficiency.

GOTHAM GAZETTE: About how many New Yorkers would be below that line?

LAWRENCE ABER: I haven't run those numbers, but nationally it about doubles or triples the number of people who live in families that cannot meet their basic needs.

GOTHAM GAZETTE: One of the recommendations in the commission's report to measure poverty more accurately is to create an Economic Opportunity Index. What is that?

A single score like that would have several advantages. First, if one dimension of economic wellbeing went up and another went down, you might say things got better or worse if you're only tracking one when, trading off, they stayed the same. A multi-factor system like that is going to create a more reliable gauge.

Second, it's an effective communications tool. One of the things the commission recommended is to demystify this process and help citizens of New York understand the economic health of their fellow citizens and the city as a whole. We think an economic opportunity index could be a big contribution both scientifically and from a communications standpoint.

GOTHAM GAZETTE: Is the city already collecting the data needed to do this?

LAWRENCE ABER: No. The city has a lot of the data, but a few things would have to be collected anew. Right now city data mostly comes from people who are seeking services. Well, if poor people aren't seeking services, they're not getting into the numbers. The only way you can get some of the numbers for the population of poor people as a whole is to survey them directly.

LOOKING FOR WHAT WORKS

GOTHAM GAZETTE: The report's recommended focus on the working poor, young adults, and children under five has been criticized as too narrow, but the overall report has also been described as too vague. What is your perspective on these critiques?

LAWRENCE ABER: First, on the issue of those three target groups: [the commission has] said very clearly that there is no intention to roll back any of the current investments in low-income families, the aged, welfare recipients, and a number of other subgroups of the poor for whom the city is already doing a fair amount.

The commission identified these three groups who, as the report said, we believe can benefit most directly, immediately, and dramatically from well-focused and coordinated interventions. I endorse that, and when you think of it, in a way they are groups that society as a whole invests the least in right now. Are these the only three subgroups to address? Absolutely not. Are they ones that represent over half the poor, and where we think we can identify strategies that could make a difference in the short-run and really significantly change things? Yes.

There will be a stage two of the initiative. If the city is successful in stage one, it should cast its eyes on the next challenge.

In terms of overly vague, there were 30 commissioners working on a five-month time line with a very active, ambitious, and savvy city administration. The main way we could reach consensus was to articulate recommendations at a general enough level to be of helpful guidance, but not to micromanage. 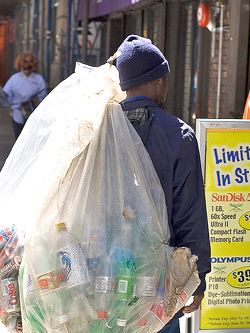 The people in the commission are not people in government, and they don't have all the technical resources necessary to turn general recommendations into a specific action plan. When Mayor Michael Bloomberg announced the initiative, he also charged Deputy Mayor Gibbs to come up with an action plan and implementation plan in 60 days.

GOTHAM GAZETTE: Were you able to identify any specific programs or strategies for confronting poverty in New York City that you can definitely say, "this is something worth expanding", or, "this program is absolutely not working"?

LAWRENCE ABER: The city posed the challenge to itself that said, "How can we do this without more state and federal help"? I think that there was the perception that good quality childcare for our youngest kids both worked as a school-readiness strategy and worked as a work-support strategy. The childcare tax credit is an indication of the city taking responsibility to expand resources on a strategy that works.

GOTHAM GAZETTE: Were there any strategies or specific programs that you didn't think were worth the investment?

LAWRENCE ABER: The commission did look at some strategies that did come under question, but I think there wasn't a lot of general conversation at the commission about things that weren't working. As a commissioner, I personally believe we should be ready to identify and eliminate expenditures that aren't having an impact on families' real economic security and investment, and then use that money to invest in more effective strategies.

We will undoubtedly find things where we want to shift the investment. That's hard to do in a commission where people pour their life's blood into different components of that. That job is going to end up falling on government. Personally, I think, appropriately so.

HOW WILL WE KNOW WE'RE WINNING?

GOTHAM GAZETTE: What tangible ways are there to measure the success of the city's effort?

LAWRENCE ABER: The first is that there are going to be action steps. In order to implement the childcare tax credit, for example, there are going to have to be several concrete steps taken. Some city and state legislative changes will have to be made, and a new governor will have to adopt these changes. Then the word has to get to families in ways that they actually take up the tax credits. Each of those steps is measurable; you can set up benchmarks.

The goal is to take each of the action items and create such measurable benchmarks, then track the city's progress against those benchmarks.

But even if city government does all of the things the problem can be getting worse if the nation goes into a profound recession. We would know that the problem is getting worse by having an alternative measure of poverty and an economic opportunity index; those would show a worsening economic condition for New York City residents caused by the national recession.

But these measures can't be used in a simple-minded way to say whether a city initiative is working, because other things affect the poverty status of New Yorkers.

GOTHAM GAZETTE: How will city agencies be held accountable for their performances?

LAWRENCE ABER: The commission recommended that New York City continue to build on its beginning tradition of accountability in a couple of other areas in city life, [such as] crime control, and homelessness reduction. There, internal benchmarks are tracked, and commissioners are held accountable by the mayor, politically and directly.

We also encourage the city government to look at approaches in other places. The United Kingdom under Tony Blair developed a major anti-poverty initiative in the late 1990s. They have developed an approach where the budgets of national agencies are affected by whether they meet benchmarks or not. This is a process called joined-up government.

GOTHAM GAZETTE: How long will it be before we can expect to see results?

LAWRENCE ABER: I think we can expect changes in government action in a year, changes in patterns of investment in two years, and changes in outcome in three years. That's enormously ambitious, but you see the logical sequence there.

One of the things that was emphasized to us a lot by Deputy Mayor Gibbs is how important the mayor felt it was to hold his administration accountable to measurable change. That's the kind of guy he is. I think he would fail by his own standards if there wasn't measurable change in three years. And I don't think he expects to fail.