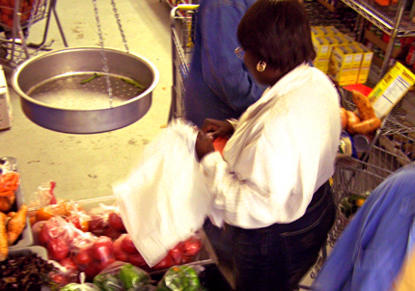 For the hungry, the routine at most of the city's 600 food pantries goes something like this: Line up outside with dozens of fellow New Yorkers in need of food. Wait in the cold or inclement weather for an hour or so. Collect a bag of groceries, and hope that what is inside can fill the gaps in the cupboards at home.

Stepping in to the pantry of the Bed Stuy Campaign Against Hunger is a different experience. In fact, it is more akin to walking into a supermarket. Sign in, pick up a basket or grocery cart and make your way through aisles stocked with bread, milk, cereal, rice, beans, canned fruits and vegetables - you name it. An industrial-sized refrigerator with chicken and veggie burgers sits behind the checkout counter, along with boxes of fresh produce. When you have picked out everything you need, check out at the register using a point system based on the size of your household, bag your own groceries and go about your way.

The Bed Stuy pantry feeds more than 6,000 New Yorkers every month, half of whom are children. Overall, more than one million New Yorkers rely on emergency food at some point during the year, according to City Harvest, a non-profit food rescue organization, and the numbers are increasing.

While a recent rise in the price of basic food staples like milk, eggs, flour and sugar has pinched household budgets nationwide, rising rents and a rash of mortgage foreclosures are hitting low and mixed-income neighborhoods like Bed Stuy especially hard. The people running the pantry have noted a major rise in the number of clients over the last year, especially among the elderly.

"We had to turn away hundreds of customers last fall, October through December," said Tamara Dawson, the pantry's program coordinator. "We kept running out of food." On a recent weekday afternoon, Dawson said the pantry's current supply of milk, rice, and pasta likely wouldn't last through the end of the week.

People on a fixed income are most affected. "When you only get one check a month, you have to make it stretch like chewing gum," said Mary Sweeney, 68, an appreciative customer who traveled by bus from Brownsville.

The Pleasure of Choice

"Client choice" food pantries like the one in Bed Stuy help alleviate some of the stigma involved in visiting a food pantry. "A lot of our clients already feel a little embarrassed about coming to a pantry, so they love how we designed our pantry. It's common sense," said Tom Neve, coordinator of the all-volunteer pantry at Reaching Out Community Services in South Brooklyn.

"It's more dignified for the clients," said the Reverend Melody Samuels, executive director of the project. "They can shop with pride."

Instead of picking up a readymade bag that may or may not contain food the customer wants or needs, client choice pantries let shoppers tailor their food choices based on their own tastes, cultural background or dietary restrictions. This kind of pantry also represents a more efficient way to provide emergency food to people who need it, by integrating client feedback into purchasing and stocking decisions the pantry staff must make on a weekly basis.

"You only take what you want here. There's less waste," said Noreen McClowd, a client at the pantry who also volunteers once a week.

In fact, when the pantry was run out of the G.R.A.C.E. Church basement, before moving to the other side of Fulton Street near Ralph Avenue in December 2006, waste was a problem, according to Dawson,. She and her volunteers would often find bags of unwanted dry goods left outside the pantry doors.

"Now our clients have a choice so they tend to pick out just what their family needs, not what somebody else thinks they might need," said Dawson. "And that helps us save money."

The Bed Stuy pantry is modeled after the West Side Campaign Against Hunger in Manhattan, considered to be the first supermarket-style food pantry in the country. It is a cooperative, which means that all the customers work at least one shift a month, helping with stocking, checkout or clerical work. Clients can pick food based on their diet and health issues, and perhaps most importantly, the cooking facilities they have access to, said Doreen Wohl, director of the program.

"If you are homeless it may not be in your best interest to go to a pantry and take away a lot of fresh produce that is perishable," said Wohl. "The prepackaged grocery bag doesn't distinguish that."

The history of the West Side pantry says a lot about the collaborative relationship it has built with its customers. One cold day in the spring of 1993, an assistant who was paid to pack grocery bags was late for work. With tens of clients lined up outside the door, many of them seniors, Wohl went outside and asked if they'd like to help.

"They all just came alive, and everybody was anxious to help," said Wohl. "That's when we really changed our orientation. We used to call them clients, now we call them customers. It's about trust. We trust in the customer and the knowledge they bring to us about their diets, their illnesses or their family background."

The Problem of Choice

Still, the client choice model is more difficult to run, requiring thorough attention to customers' dietary restrictions or health needs. More thought and preparation is put into deciding what to stock and what to leave off of the shelves. The pantries' food supply comes from a mix of donations, from individuals and businesses, but mostly from the Food Bank for New York City, the largest distributor of free food in the city. The pantries also have a budget to purchase other items in bulk. This leaves them vulnerable to periodic shortages, such as the one that occurred last fall, when there was a significant dip in federal emergency food aid and many pantries across the city were forced to turn people away.

"Nothing is easier than just giving out standard, prepackaged bags," said Neve.

Neve also acknowledged that space is an issue for the Campaign Against Hunger. It is easier to develop a choice-based, grocery market style pantry when there is ample room to set up shelves and store food stock nearby, preferably in the same building. For pantries that are run out of a church basement, this may not be a real option. The Bed Stuy Campaign Against Hunger was able to sign a long-term lease on a small warehouse space in 2006. The Reaching Out food pantry just moved to a new, larger space in November. As a result, Neve said, it has seen a big jump in people coming through the door, particularly seniors on fixed incomes and single parents.

When all of the elements fall into place and the client choice system works, patrons obviously appreciate it. John Bailey, 58, is a regular volunteer at the pantry in Bed Stuy who greets customers with a big smile. He helps explain the point system to new arrivals, discussing how it awards points based on the size of the household and whether any of its members of the house have illnesses such as diabetes or hypertension that would affect their diet. Bailey likes the way the pantry is organized-and it has had a direct influence on his cooking habits.

"What God gives me I take," said Bailey. But thanks to having some choice at the pantry, he said, he's honed a few recipes, including sweet potato pie. "When they have sweet potatoes in stock, I always go for those. My friends and neighbors tell me my pies are getting better with each try."

Joseph Huff-Hannon is a writer on culture and politics, based in Brooklyn.Â