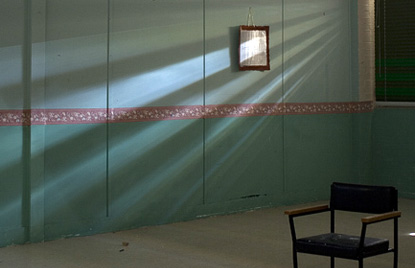 People come to Damon Moore every day needing a lot of things - a job, help staying sober, a decent apartment. But mainly, they need help remembering how to live. Most have been behind bars long enough to have forgotten what it is like to put a paycheck in their pockets, decide what they want for breakfast or hold their child.

Moore helps run Network in the Community and Network in the Prisons, a set of programs for formerly incarcerated New Yorkers founded by Episcopal Social Services. At Moore's branch in East New York, former prisoners receive services ranging from job counseling to anger-management therapy - whatever they need to move forward.

"We try to change your system of thought," he said.

In a typical year, more than 25,000 New Yorkers walk out of prison into an unfamiliar world. Stigma and instability await them at every turn, and everything from opening a bank account to grocery shopping can be an alien experience.

Moore, 33, has traced that shaky path. He got involved with the network's prison-based programs in his 20s when he was imprisoned for armed robbery. The counseling he received helped him assess his own potential as an advocate. Inside, he spoke out for better conditions for prisoners. When he got out, he carried that social consciousness back to his community, while continuing to lean on the network to stabilize emotionally.

Today, in his work as a counselor with the network, Moore embodies a keystone of progressive reentry programs: enabling people who have been in prison to create new roles for themselves as community members.

"A lot of times," Moore said, "people say stuff like, 'Oh, Damon, you're different.' And I go forward and ask them, 'What makes me so different?' I mean, we all have this ability to change."

The Downside of Freedom

"When you come out here, to be free is painful," said Paulie Santos, 64, who was released in 2005 after serving time for murder. "'Cause you gotta be responsible. You gotta get up early. If you want to eat, you gotta go out there and earn the money. You decide when you're taking shower, when you go to the bathroom. In prison they tell you everything. So when you come out here... a lot of people can't deal with that."

Though the state prison system offers some transitional services, such as vocational training and substance-abuse treatment, former prisoners often come home to the same instability that drove them toward crime in the first place. The state Department of Correctional Services, which oversees the facilities that house most of state's incarcerated population, reported that among prisoners released in 2002, nearly four in ten returned to the system within three years.

People continue to stream out of prison into uncertainty. According to corrections authorities, about 26,400 people were released in 2006. Those leaving prison for the first time were mostly male, mostly from New York City, and disproportionately Black and Latino compared to the state population overall. The median time served was about two and a half years and the average age at release was 34.i

As the main lifeline for struggling former prisoners, community-based groups have worked to reintegrate people inside and outside prison walls.

Episcopal Social Services' network aims for a "seamless" transition by engaging prisoners well before their release. At nine state facilities and one city jail, prisoners voluntarily enter supportive communities within the prisons. They attend support groups led by the inmates and, when space is available, live in communally run housing. Once immersed in the program, people who have spent years staring at concrete and bars suddenly find themselves sharing chores and socializing with colleagues. The constant isolation of conventional prison is replaced by a mini-society centered around daily therapeutic meetings.

By giving the prisoners a sense of fellowship and purpose within a broader community, said program director Anne Williams, the network drives participants "to look for and meet the best part of themselves ... and exchange a dysfunctional lifestyle for a functional one."

Outside prison, the organization's close ties with parole officers encourage referrals for released individuals to the network's community-based sites in the Bronx, Manhattan and Brooklyn, linking them to long-term peer support and other services.

Of the hundreds of clients served by those community programs from 2004 to mid-2007, only 12 percent reentered the prison system-about a third of New York's overall three-year recidivism rate.

Beyond helping people meet basic needs, re-entry programming propels clients into advocacy work. Many become activists on prison-related issues like sentencing reform and HIV/AIDS prevention, or turn past struggles into a teaching example. Moore recently coordinated a gang prevention program in which former gang members spoke with at-risk youth about their experiences with crime and incarceration.

"We've taken a lot out of the community," Moore said. "It's time to put something back."

From Crack House to Safe House

Softening the plunge into the "outside" world, programs for former prisoners offer support from peers dealing with similar challenges.

At a towering gothic landmark in West Harlem known as the Castle, the Fortune Society houses about 62 people who became homeless after prison. They're welcome to stay as long as they need, supported by counseling, employment assistance and legal help while preparing to live and work independently.

The building itself, a converted crack house, encapsulates its mission of redemption: It has harbored more than 500 men and women since 2002. Clients live in apartment-like housing with others going through similar transitions, along with former clients who have graduated to positions as service providers. Once anchored at the Castle, clients can receive various services, including GED classes and substance abuse treatment. Parents can engage in therapeutic programs to help reconnect with their children.

"I hear clients all the time saying that the city-run shelter system is worse than prison," he said.

Rebuilding a life after prison means finding honest work, but employers often turn away people with conviction records. Despite statewide anti-discrimination protections, former prisoners face an extraordinarily high unemployment rate. In New York City, the mayor's office estimates that a criminal record undercuts an individual's chances of landing a job by 35 percent for whites and nearly 60 percent for blacks.

Santos, who earned a college degree during prison and has tutored residents of the Castle in computer skills, said joblessness drives many former prisoners into a familiar spiral of desperation.

"That's where the recidivism rate takes place," he said. "Because how long could you be out here, doing nothing? You need a roof over your head."

On the flip side, employment can vastly improve a former prisoner's chances of success. The New York-based Center for Employment Opportunities has placed about 10,000 formerly incarcerated people in full-time jobs over the past decade through targeted training . In transitional work-preparation programs, clients develop workplace cooperation and communications skills - qualities that can persuade employers to give former prisoners a chance . A recent independent evaluation found that, one year out, participants were reincarcerated at about half the rate of similar group of former prisoners who were not in the program.

But advocates say helping people navigate a biased job market only goes so far if the system is rigged. Groups like Fortune have pushed the state government to strengthen anti-discrimination protections for former prisoners, boost tax credits for employers who hire them and expand prison-based educational programs.

"It's great that we provide all these services," said Martin. "But sometimes it's a little bit like standing in the emergency room putting Band-Aids on cancer."

Federal legislation passed earlier this year could provide additional resources. The Second Chance Act authorizes grants to states for reentry programs aimed at preventing recidivism. The law's actual impact, however, will depend on how much money Congress decides to pump into it. Re-entry service providers generally rely on yearly grants from state and local coffers.

But money can only chip away at the obstacles bombarding former prisoners. Activists point out that the fundamental problems that originally ensnared them in crime await them when they leave prison: violence, failing schools, chronic unemployment. To stem the cycle, some re-entry organizations operate alternative-sentencing programs in the courts, routing people away from prison and into drug treatment and other community-based programs.

"People are going back to the very neighborhoods that are hardest hit by poverty and racism, and ... incarceration itself has depleted them of social capital," said Marsha Weissman, executive director of the Center for Community Alternatives, which runs re-entry and alternative-sentencing programs in Syracuse and New York City. If incarceration patterns reflect deeper ills, she said, "Why do we only focus on the back end to address those issues?"

"We need to do more in terms of asking ourselves, what's going on in those communities?" Martin said. "What can we do better, so that people are making more appropriate decisions? The question to me is: Can we reinvest to get better outcomes?"