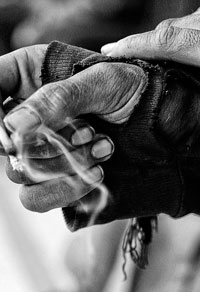 Just as some of New York's best-paid workers began streaming from humbled investment banks, City Hall made an announcement regarding people at the other end of the economic spectrum. It reported that almost a quarter of New Yorkers live beneath the administration's revised poverty line of $26,138 a year for a family of four. The adjustment, announced in July, increased the city's 2006 poverty rate to 23 percent from the 18.9 percent under existing federal guidelines. The jump wasn't a product of the economic crisis, but of the city government's new way to measure who is poor.

The city's Center for Economic Opportunity developed the new threshold as an alternative to the federal measure, which was introduced in 1969 and is widely considered outdated.

"Since the mid-'60s the economy has vastly changed. So has society and so have government benefits but the poverty formula hasn't adjusted in response," Mayor Michael Bloomberg stated in the city's press release.

The Center for Economic Opportunity hopes the revised measure will aid policymaking by providing a clearer and more nuanced picture of poverty in New York.

The new threshold is based on guidelines developed by the National Academy of Sciences that say poverty measures should reflect the cost of food, clothing, shelter and utilities. The existing federal measure focuses primarily on the cost of food, which, over the last few decades, has since shrunk from one third to one eighth of household spending, according to economic opportunity office. Unlike the federal standard, the new threshold also considers out-of-pocket medical expenses and costs associated with employment, such as transportation and childcare, and counts as income government benefits like food stamps and housing vouchers. The federal measure also fails to account for geographic differences.

The net effect, says Mark Levitan, the Center for Economic Opportunity's director for poverty research, provides a better gauge of the effect of government policy.

"What's been the focus of policy in the last 15 years? It's been single moms and their children," said Levitan. The new measure, by taking government benefits into consideration, reflects the impact of this focus. "We see how nutritional assistance programs and tax credits are benefiting those families," he said. Under the new threshold, the number of children in single parent families living below the poverty line decreases by almost three percentage points.

The new measure also exposes areas where policy is lacking. The poverty rate among New Yorkers 65 years old and up balloons from 18 percent under federal guidelines to 32 percent. And the poverty rate for the working poor -- families with at least one full-time worker -- rises from 28 percent to 36 percent.

The Effect on the Poor

While the new measure makes it easier to analyze poverty, for now it won't help alleviate it. The federal government determines eligibility for benefits like food stamps, so the more than 300,000 New Yorkers who are poor by city, but not national, standards will have to wait for change from Capitol Hill.

Levitan believes that the new Congress will address the issue, but he stresses that the city wants a new poverty measure as a policy tool, not a determinant of eligibility. "It would be a little naive to think that New York City engages in a process of measuring poverty, [we] find more poverty, and then we open our pockets expecting billions of new largesse from Washington," he said. "We knew that that wasn't going to happen."

In the meantime, he said, the message to vulnerable New Yorkers is that when the city commits itself to solving a problem, "we don't do these things by the seat of our pants."

It remains to be seen though, whether the poor and the people who work with them have gotten that message.

"This is the first I've heard of it," said Lucia Russett, director of advocacy at Little Sisters of the Assumption, a multi-service community organization in East Harlem.

Her clients are struggling with the rising cost of housing. One woman, married with four children, receives $549 per month in food stamps and another $324 in support from her first child's father. She does not work so she can stay home and take care of her children. Her husband, who has limited use of one arm, receives $660 in Supplemental Security Income and Social Security disability. The family's rent in public housing is $521 per month, leaving little for clothing and other expenses.

"It's great to have another way of getting closer to a more accurate picture of what poverty is in the city, but if it's not effecting any real change at the policy level, that's the next step in this," said Jilly Stephens, executive director of City Harvest, a food rescue nonprofit.

The Prevalence of Poverty

Some also question whether the revised line is generous enough. In 2004, the Women's Center for Education and Career Advancement published a report that calculated "self-sufficiency" standards for New York City families. The report found that households needed incomes of about $50,000 to $78,000 to afford basic expenses for a family of four -- more than twice the city's new poverty line.

While illustrative, these figures don't assist policy making, said Levitan, who estimated that 50 percent of the city lives below such a standard.

"Suppose we had put out a report and we'd said, '50 percent of the city's population is poor,' would that be a guide to policy making? It would be a totally meaningless statement," he said. "Poverty should have a sting to its meaning, and if half the people in the city are poor, then poverty becomes a meaningless concept. Poverty should connote a level of deprivation that is unusual in society."

Even by Levitan's standards, so-called "near poverty" is pervasive. According to the Center for Economic Opportunity, 44 percent of New Yorkers live on less than 150 percent of the revised poverty line, or roughly $39,000 for a family of four.

The new threshold also raises questions about the minimum wage. At the current rate of $7.15 per hour, a full-time employee working year-round earns almost $15,000 annually. If she has one child, her earnings put her above the 2006 federal poverty line for a one-adult, one-child family ($13,895), but leave her beneath the city's figure of $18,280.

"These are the inconsistencies that start coming out as soon as you go down this line, and that's why it's so important that the city begin to dialogue in an official way," said David Jones, president and CEO of the Community Service Society of New York.

He said that the poverty line should be seen only as a first step, but an "extraordinary" one nonetheless.

"The self-sufficiency model is what we think we should move toward, but no one else is proposing even what this mayor and his team have come forward with, so as a first step we can do nothing but applaud," he said.

"It's very good news for people who are advocating for low-income communities, because certainly it could be used to say 'look at how low-income people are living and how this compares to what's possible and what's really livable and dignified,'" said Russett.

Skeptics exist, too. A July New York Post editorial faulted the measure for overlooking income earned in the city's underground economy and suggested that Bloomberg was merely seeking attention.

City Hall's attention to poverty may be prescient. New York City's unemployment rate rose from 5 percent in July to 5.8 percent in August, the biggest monthly increase on record. And overall economic conditions are hampering the work of charitable organizations.

"At a time that organizations like City Harvest are potentially staring down a decrease in donations that fund the types of programs we're providing, we're seeing an increase in the number of people turning to the types of programs that we're supporting," said Stephens of City Harvest. "Our aim is just to do all we can to make sure we can continue delivering the services."