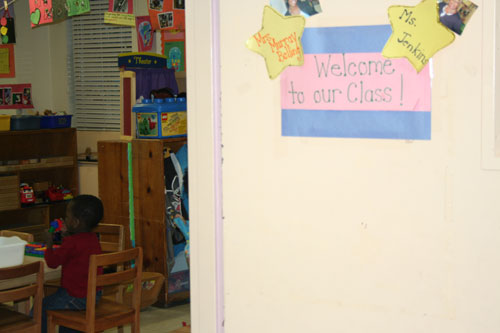 More than 40 parents crowded the back room of Strong Place Day Care Center in Brooklyn. Their anger -- and fears -- were in stark contrast to the room's cheerful pink walls. Their calls of worry almost drowned out the laughter coming from a classroom down the hall.

"What are we going to do?" asked one parent from the back.

For now, staff members of Strong Place, where more than 50 kids attend city-subsidized day care from 8 a.m. to 6 p.m. year round, don't have answers.

"I will fight for you with my last breath," said Strong Place Day Care Director Lorraine Pennisi, who has run the center for two decades. "The mayor thinks, 'Day Careâ€¦ Babysitting,'" Pennisi said, throwing her hands in the air.

"It's important for you to say there is no place like Strong Place," she added.

Strong Place, which is located across the street from the New York City Housing Authority's Gowanus Houses, is one of 16 day care centers overseen by the Administration for Children's Services that could close in July. More than 770 children and their families and 300 workers would be affected.

The closings are just a small part of the Bloomberg administration's plan to fill an approximately $4.9 billion budget hole. As part of the Administration for Children's Services attempt to pare down, it plans to close day care centers with disproportionally high rents compared to other facilities citywide. The administration, said city officials, also considered whether there were other day care alternatives nearby when deciding what centers to close.

As a result, many of the centers slated to close are in gentrified areas, like Cobble Hill, Carroll Gardens or DUMBO, and 11 of them are in Brooklyn. Of those, four are within two miles of Strong Place.

But parents and kids at Strong Place -- like the many others who attend these day care centers -- don't want an alternative center. They want Strong Place to stay open.

In Strong Place on Thursday, dozens of parents navigated between cubbies and artwork strung from the ceiling.

Several 3-year-olds sitting in miniature chairs tossed Legos back and forth along the miniature tables. Meanwhile, parents, who pay tuition on a sliding scale, lamented the potential closure, wondering what they would do next should Strong Place actually shut in July.

"It's very upsetting," said Sara Allen, whose daughter, Ruth, has attended Strong Place since early 2008. "I don't think it's fair for people that don't have much of an alternative. It's hard as it is," Allen added.

Strong Place is more than day care, said parents. It's the start to their children's education.

"They are like family," said Anna Marie Vitale, whose two children, Anthony and Gianna Aleo, attend Strong Place. As for the closing, "It's not going to happen," she added defiantly. "It can't happen. It's kids."

The city directly negotiates leases with landlords for 115 centers. Strong Place is one of them. In total, the Administration for Children's Services oversees 339 day care centers, the vast majority of which are contracted out to local nonprofits.

Administration officials say the leases at the centers slated for closure are too much to cover in this recession. By closing the 15 sites, according to budget documents, the city would save $9 million in the next fiscal year and $16.3 million every year thereafter.

In addition, the administration argues these children have other options.

"The 772 children enrolled in those 15 centers will be able to find seats in other quality neighborhood programs," Commissioner John B. Mattingly said in a prepared statement. "Our only other option was to cut slots and take away child care services for hundreds of children, which we wanted to avoid. The closures of these 15 centers will achieve significant costs savings with no loss of service for any child currently being served.”

According to the administration, the average occupancy cost, which includes rent, real estate taxes and utilities, at these 15 sites is $396,952. The average cost of centers citywide is $177,184. The administration also notes the cost per child at the facilities slated for closure is as high as $11,000, while the average for city leased centers is $5,000.

But these arguments haven’t convinced anyone at Strong Place.

Walking past kids' paintings -- which included interpretations of Jackson Pollock's abstract style and renditions of Vincent Van Gogh's "Starry Night" -- Pennisi said every day care is different. But the curriculum here at Strong Place goes far beyond that of other day care centers, Pennisi said.

Some of the city's unions, including District Council 1707, who represents day care workers, and the Council of Supervisors and Administrators, as well as a number of the city politicians are taking up Strong Place's cause.

"We cannot let our families go," said Montgomery. "We have abandoned our children."

Many of these officials claim the administration's logic for choosing these centers is flawed. They contend total enrollment is not at 772, but more than 1,000, according to unions. They also say some of these centers recently renovated. Closing their doors is a lost investment, the council says.

"How do they expect a parent to work if they don't have a safe environment for their children?" asked Councilmember Sara Gonzalez, who attended the meeting Friday.

Officials have floated several proposals to avert the day care cuts, including negotiating with landlords to lower rents. Or if that doesn't work, the Council of School Supervisors and Administrators suggests allowing day care centers to pay for half of the lease, while the city picks up the rest. Councilmember Letitia James said federal funding could also help keep the centers open.

The administration said it was talking to landlords in hopes of negotiating a decrease.

Strong Place too was coming up with contingency plans, though they weren't ready to discuss them. Staff and board members there don't think they will have to.

"In my gut, I'm going to give it 100 percent," said Pennisi last week while on the center's roof, which boasts a play area and jungle gym for the kids. "I am not accustomed to failing."