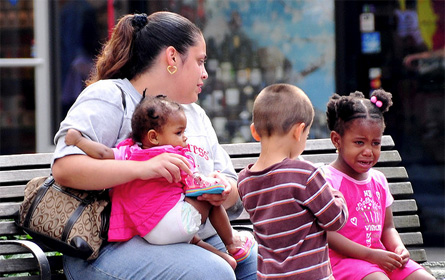 Photo by Ed Yourdon
An overwhelming percentage of caregivers are women -- one reason women will be hit particularly hard by proposed cuts in social service spending.

March may be women’s history month, but 2011 has not shown any signs of being the year of the woman. A variety of bills being introduced in Washington and locally target women's access to health care, will make it harder to escape an abusive partner and may force women to choose between caring for a relative or remaining in the workplace. Cumulatively, the proposed legislation could roll back years of progress and threaten the control that women have gained over their bodies and their lives.

At the federal level, women achieved a significant victory earlier this month when the Senate opposed the House’s attempt to defund Planned Parenthood and Title X family planning programs. Eliminating family planning clinics will not create any new jobs; it will only take vital health services -- like birth control, cancer screening and HIV tests -- away from women and families who need them.

In New York, those developments are being paralleled at the state and city levels. In his effort to eliminate New York State’s $10 billion budget deficit, Gov. Andrew Cuomo proposed a variety of spending reductions, including slashing $400 million from human services. Similarly, in his preliminary budget, Mayor Michael Bloomberg proposed significant cuts to social services. The combined loss of millions of dollars in city and state funding for human services shifts the burden of our financial problems on to the most vulnerable New Yorkers: the elderly, the poor, children and, perhaps most of all, women, who are our nation’s primary informal caregivers.

The cuts will have an enormous adverse effect on women’s lives and the well-being of their families. Estimates of the percentage of family or informal caregivers who are women range from 59 percent to 75 percent. Any program cut that makes it more difficult to look after a child, a person with a developmental disability, or a senior disproportionately affects women. Women will bear the brunt of the $53 million reduction in state support for residential schools for children with disabilities and the proposed city cut of $92 million, which will result in the loss of 16,624 childcare slots.

Women will suffer most from other proposed cuts, such as $15.7 million from New York City homeless shelters, $24 million from Title XX funding that supports New York City's senior centers, $1.5 million from non-residential domestic violence programs and a $192 million reduction in city, state and federal funding for housing subsidies for homeless adults.

The proposed cuts to family shelters and the Advantage housing subsidy deliver a double whammy to women. Households headed by single mothers make up the majority -- 80.8 percent -- of homeless adults with families in the shelter system. Many of these women are escaping from abusive partners. The cuts to shelters will force many women -- and children -- to remain in harm’s way.

The Advantage housing subsidy program provides one path out of the shelter system and into permanent housing. Currently over 15,000 households receive the subsidy. The elimination to this program costing $192 million means that next year, thousands of woman and children will have to remain in a shelter or return to an abusive situation.

If Bloomberg does not reverse his proposal for cutting child care subsidies, many women will be forced to choose between putting their children in a potentially unsafe situation or giving up their jobs. Without a subsidy, many women and families will face tough choices about how to pay for rent, utilities and food.

And it doesn’t stop there; if women are forced to leave their jobs, it will have a serious impact on New York City businesses. Nationally, employers currently lose an estimated $3.3 billion annually to replace women who quit their jobs because of care giving responsibilities and another $270 million due to absenteeism among women caregivers.

It took women nearly a quarter of a century to make the gains they have made in their lives: Marriage is no longer the only viable path to financial freedom, two out of five women work outside the home, and large numbers of women have entered the professions, trades and business of every kind. But if our lawmakers have their way, we are only a few votes away from dismantling many of the policies that have allowed women to achieve -- and maintain -- their independence.