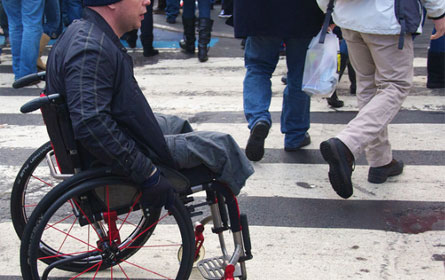 As dire as the economic situation is for New Yorkers overall, the challenges confronting those with disabilities in this economic climate loom as truly staggering. Almost one third -- 32 percent -- of all disabled New Yorkers live in poverty.

The median household income for these disabled city residents is $30,555, compared to about $58,072 for the working-age population without disabilities. This income gap of $27,517 is substantially greater than the divide in the United States and somewhat larger than that for New York state as a whole.

No single reason accounts for the difficulties facing disabled New Yorkers. Some of it, of course, arises from the overall high rates of of poverty and homelessness in New York City, a crisis the Bloomberg administration by many accounts has been slow to address.

Joel Berg, executive director of the New York City Coalition Against Hungerand a frequent administration critic, said the data has finally captured the mayor's attention. However, Berg wrote, his administration still doesn't quite get it.

Human Resources commissioner Robert Doar "continues to make the argument that NYC is doing a fine job fighting poverty because we still have lower overall poverty rates than Detroit of Philadelphia,” Berg complained in an email. "I am surprised he doesn't brag that we are doing better than Burkina Faso and North Korea."

As poverty increases, advocates say people with disabilities face a series of obstacles -- starting with shortcomings in special education and continuing on to problems in health insurance, job placement programs and the very government offices designed to address their needs. Those with disabilities face systemic discrimination and barriers within both the public and private sectors. Together, all of this traps many disabled New Yorkers in a sequence of poverty.

Whatever the reasons for the distress, the numbers portray a serious crisis. Over the summer, the Center for Independence of the Disabled, New York released a report analyzing the state of people with disabilities in New York 20 years after the passage of the Americans with Disabilities Act.

"We are more likely to be hungry and impoverished than our non-disabled counterparts and rely on food and health safety-net programs for survival," it said. "The problem of disability-based disparities in access and outcomes has consequences for our state and city that have not been fully explored or addressed."

Educational disparities play a key role in the sequence of poverty. People with disabilities are less likely to graduate high school than other New Yorkers, with only about 30 percent completing high school in four years. "If the education gap is greater, then poverty is greater," Hunter College professor and center board member John O’Neill said, adding if people with disabilities "can acquire better education, prospects for earning over a lifetime are better like [with] everyone else."

Despite many efforts to place students in the least restrictive possible settings, many disabled students remain isolated from other students. Maggie Moroff, coordinator of the ARISE Coalition, which was created to advocate on behalf of children with special needs, and coordinator of special education policy at Advocates for Children said the city Department of Education has made some improvements” in special education. However, Moroff said, the department still needs to integrate more students into the general school population and increase the quality of education offered students in special education.

"Teachers were trained to meet all needs but [the] academic [ones]," Advocates for Children executive director Kim Sweet elaborated. "Many special education teachers lack training in academic content, such as history or math, particularly at the high school level.”

Two reports issued by Arise, Out of School and Unprepared and Educate! Include! Respect! shed further light on the struggles of special ed enrollees, particularly minority children. For example, ARISE found, over 90 percent of students graduating with Individual Education Plan or IEP, diplomas -- available only to special education students -- in 2007 were black or Latino, although black and Latino students made up only 70 percent of all students in the class of 2007.

An IEP diploma has less academic value than New York's other diplomas -- it is not accepted by colleges or the military -- so many students find they also need to get a GED, available to people who did not graduate, as well. Moroff said families often don’t know this is the case. "By the time family knows, [the child] is too many credits behind” his peers to catch up, she said.

A spokeswoman for the education department's special ed office adamantly disagreed, saying parents are informed about the diploma early on. She also noted that the state, not the city, establishes standards for issuing diplomas.

Moroff said school officials need to consider whether what they see as misbehavior may have been caused by a student's disability. Once suspended, she added, "The child, often incorrectly, is sent down a path toward an almost certain failureâ€¦ They lose time and [often] drop out."

Workforce development and other employment programs do little to rectify the shortcomings of the schools system, advocates for the disabled say. "Most workforce programs funnel people with disabilities toward low-wage employment -- not careers. This keeps people with disabilities in low-wage jobs that generally have no ladder up," Susan Dooha, executive director of the Center for the Independence of the Disabled, wrote in an email.

The one-stop work centers designed to help New Yorkers find employment vary considerably in how effective they are for the disabled, according to O'Neill. Some, he said, are inaccessible to those with physical disabilities. More importantly, though, the centers receive payment on a per-client basis, creating a disincentive for center staff to help people, including the disabled, who may require more help to find appropriate work.

In New York City, the Workforce1 career centers are technically administered through the Department of Small Business Services and <http://home2.nyc.gov/html/sbs/html/about/eo_wia.shtml A spokesperson for the mayor’s office, though, redirected the focus to a separate program run by the city’s Human Resources Administration, WeCare, which seems to prioritize getting its clients off public assistance.

WeCARE -- Wellness, Comprehensive Assessment, Rehabilitation and Employment -- was created "to give clients with disabilities the supports and services they need to have an equal opportunity to transition from welfare to their highest level of self-sufficiency by providing customized services that identify and address individual service needs," Samantha Levine, the spokesperson, said in an email.

The Mayor’s Office for People with Disabilities is supposed to serve as a liaison between city government, relevant organizations and the disabled community. It offers listings of a range of services provided by public and non-profits, ranging from education, coordinating activities and events, to agency programs designed to assist people with disabilities.

Despite repeated requests, the mayor's office did not authorize Matthew Sapolin, the commissioner of the disabilities office, to be interviewed for this article.

Government agencies, such as the Mayor's Office for People with Disabilities, have a key part to play in improving the overall lot of the disabled, advocates believe. "Public agencies are in leadership roles and ensuring that their agencies contract with disability-owned businesses can improve employment outcomes for people with disabilities," Dooha wrote.

Unfortunately, she continued, "Since the recession we have seen people" who are in the city's work program for people with disabilities "threatened with layoffs in higher numbers, losing any gains that they had made."

Furthermore, she wrote, “There is very little disability literacy in public agencies -- most have little contact with people with disabilities and give little value given to our expertise."

Dooha explained there's a lack of coordination and cohesion in medical care for the disabled. "The system is piecemeal," she said with some people not getting coverage they are entitled to.

"People who are employed whose income goes up are told they are no longer eligible for Medicaid, even when they are still low-income," Heidi Siegfried, health policy director for the Center for the Independence of the Disabled, emailed. However the state does indeed provide a program that allows them to keep Medicaid coverage even though they may have earned income. "For low-income workers this can mean that they can keep their jobs and maintain their health," Siegfried said.

City and state workers, who are supposed to be trained about these issues, often provide false or misleading information to clients, or simply do not know what programs are available, Dooha said. The fact that some disabled people are overwhelmed by bureaucracy only complicates the problem.

Given the many factors contributing to the high poverty and unemployment rates among the disabled, Disability Matters offers an array of recommendations to improve the situation. The following is just a sampling. For example in education, the report calls for:

In employment, the group calls for:

To reduce the number of disabled people living in poverty, the report would increase the benefit rate for the federal Supplemental Security Income program and change the criteria for establishing eligibility. Disability Matters also would like to see the city government provide funding for community outreach and assistance with applications and appeals to help eligible low-income people receive whatever benefits to which they are entitled.

Beyond these and many more specifics Dooha said, “We have proved we are knowledgeable experts [about] our own experiencesâ€¦ we are agents of change, not victims. If you want a victim, go to the New York Times neediest cases.”