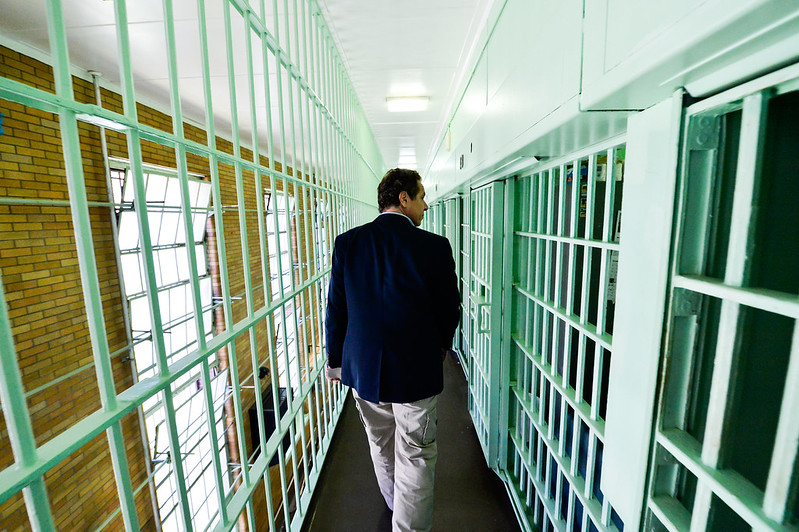 A crowded field of Democratic candidates is seeking to replace Manhattan District Attorney Cy Vance, a third-term Democrat, in this year’s election and criminal justice reform advocates have cause for optimism. In a new survey of the candidates, seven of the eight expressed support for a raft of parole and sentencing reforms that advocates have long advocated for as well as discretionary policies aimed at decarceration. Vance has not yet announced his campaign intentions, though he has not been raising money and the June primary is rapidly approaching.

The new survey, highlights of which were shared with Gotham Gazette, was conducted by a coalition of advocates, nonprofit groups, and political organizations that are working together to ensure that the next Manhattan District Attorney is a reformer who rejects the state’s punitive laws and breaks from the way that Vance has used his power in several ways.

Vance, who has held the seat since 2010, has pursued many reforms and in several ways moved the office in a progressive direction. But he has also faced criticism for ways in which his office has pursued harsh punishments against low-income people of color while letting wealthier white New Yorkers off the hook, including particularly high-profile instances involving Harvey Weinstein, the Trump family, and a gynecologist, Robert Hadden, who was accused of sexually abusing many patients.

The coalition points out that while Manhattan has only 8.9% of the state's population, New Yorkers prosecuted in the borough represent 14.5% of the state's prison population and 19.5% of elderly people in state prison, though those numbers don’t take into account a wide range of factors.

A spokesperson for Vance said he could make an announcement about his campaign intentions in the next few weeks.

“One of the important dynamics of the race that is reflected in the survey is a rejection of Vance's office and his office policies,” said Katie Schaffer, director of organizing and advocacy at the Center for Community Alternatives, one of the coalition members. “And while there are meaningful differences between the candidates, all of them really at least purport to support policies that would undo some of the harm of Vance’s office.”

The coalition asked all the candidates detailed questions about supporting specific legislation in Albany, changing internal policies towards restorative rather than punitive justice, reducing the size and scope of the office, strengthening discipline against prosecutorial misconduct, ending gang prosecutions, ensuring stronger prosecutions against police misconduct, protecting youth and immigrants, and more. The coalition did not release the full results of the survey, which are expected to be made public ahead of a candidate forum scheduled for January 27 where all eight candidates are participating.

All seven current candidates who participated in the survey said they would support state legislation reforming parole laws, including an elder parole bill and another fair and timely parole bill. They also agreed to institute or support several other reforms including writing clemency letters and letters of release for people on parole in some cases, public health releases for people on parole during the pandemic, expedited parole interviews, and ensuring that the state Parole Board does not make a decision based solely on an individual’s criminal conviction.

The results are welcome news to activists who have spent years arguing against policies of mass incarceration, with their advocacy made all the more urgent because of the coronavirus pandemic. Jails and prisons quickly became hotspots of coronavirus outbreaks last year and continue to pose health risks to the state’s incarcerated population. The crisis has also prompted lawmakers in Albany, including several recently-elected progressive members, to pursue reforms long-opposed by Republicans as well as Democratic Governor Andrew Cuomo.

Kumar Rao, senior director of strategy and policy at the New York Working Families Party, another coalition member, said it was “heartening” to see the DA candidates declare their support for parole reform. “I think it's a reflection of the really decades-long work that organizers and impacted communities and formerly incarcerated people have been engaged in to shed light on what has long been a crisis situation, a really horrific kind of system that we have in New York,” he said.

In the survey, the seven candidates supported legislation to end mandatory minimum sentences and to reduce sentences, according to the survey results, and promised to end the practice of threatening defendants with higher sentences if they avail of their constitutional right to a hearing or trial.

“Mass incarceration is a reality and I think someone running for the Office of District Attorney has to be seriously concerned with correcting some of the injustices that mass incarceration has inflicted on our communities, not just families, but entire communities,” said Jose Saldaña, director of Release Aging People in Prison (RAPP), a coalition member. Saldaña was formerly incarcerated for 38 years and was released in 2018 at the age of 65.

The seven district attorney candidates also pledged to eliminate blanket policies such as prohibiting plea deals for people on parole and excluding both people on parole and those with a criminal record from their decline-to-prosecute policies. Additionally, they agreed on holistic, survivor-centered approaches that lean towards non-court dispositions of cases, such as declining prosecution, diversion and restorative justice programs, and community mediation. Even the current five sitting District Attorneys from New York City agree with that approach to some degree – last year, all five argued for continued funding for Project Reset, a pre-arraignment diversion program that has kept 4,500 New Yorkers accused of low-level offenses out of the criminal justice system by offering them community-based intervention such as individual counseling, group therapy, and arts workshops.

“Generally speaking, they're all on the same page in regards to those criminal legal system reforms, so that actually shows us that there is an appetite for a progressive DA,” said Jason Salmon, regional director of Citizen Action of New York, a coalition member. “And we've seen across the nation, there's an appetite for it, so why in New York City, why in Manhattan, shouldn't we have the most progressive DA that we can have.”

According to Schaffer, several of the candidates also said they would not join the District Attorneys Association of New York, an organization that many advocates blame for being a roadblock to progressive reform. Other candidates said they would join the group, if only to effect change from within, Schaffer said.

Michael Oliva, a spokesperson for Crotty’s campaign, said in a statement, “You cannot carte blanche affirm or disavow any portion of a specific platform in a vacuum with yes or no answers when the facts of each and every real life case will differ. It’s irresponsible to do as a candidate for a position that holds as much gravity as does Manhattan District Attorney. Context is everything in criminal law.”

In a statement to the coalition that Oliva shared with Gotham Gazette, Crotty had said, “As a career practitioner, having done close to 4,000 cases, more as a defense attorney, there is one basic tenet, the facts in every case matter. The questions as asked in a yes or no format, with no details to a specific case or its application is not a way to prosecute or defend a criminal case. One of the most important messages in my campaign is that each and every case is different and that each and every case should be looked at individually.  To sign on to blanket yes or no questions is not something I am going to do throughout my campaign. I appreciate various groups' commitment to transparency, accountability and independence. If elected to be the next Manhattan District Attorney, I will work to create an office that values and promotes those ideals.”