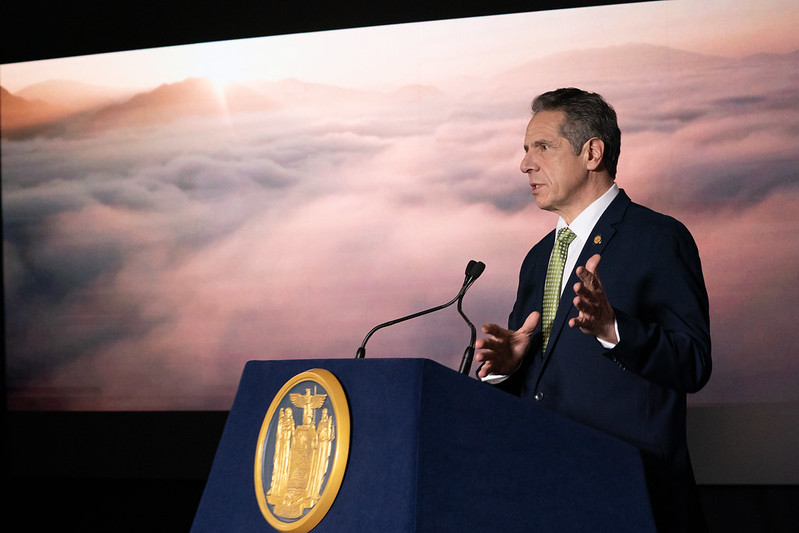 When Governor Andrew Cuomo unveiled his executive budget on Tuesday, a $193-billion roadmap for the next fiscal year, beginning April 1, he presented a forked road towards the state's economic recovery with Washington lawmakers essentially behind the wheel.

Under the "worst-case scenario" outlined by the New York State Division of the Budget, the state would get just $6 billion to fill a $15 billion hole covering the rest of this fiscal year and next, out of a $350 billion aid package to state and local governments backed by the incoming Biden administration. This is the circumstance under which the new Fiscal Year 2022 budget has been cautiously written, viewed by budget officials as a relatively certain floor, which will entail cutting school aid, Medicaid, and broad cuts to localities as well as revenue-raising measures.

Cuomo said he may move to increase income taxes on the wealthiest earners and that he would supplement the remaining gap by borrowing billions. The governor is under significant pressure from state legislators and activists to increase a variety of taxes but the Legislature has yet to make an aggressive move in that direction and Cuomo has resisted, saying he does not want to drive higher earners out of the state.

The best-case scenario Cuomo outlined Tuesday sees New York receiving $15 billion -- the entire projected two-year gap -- and Cuomo says he will sue the federal government if the state doesn't get it. Cuomo called this route the "fair funding scenario" and said it was a matter of justice for New York serving as the battered vanguard in the fight with COVID-19.

"This budget is really the economic reconciliation of the covid crisis," Cuomo said during a Tuesday presentation. No single scenario is a panacea, and the governor is looking to legalize adult-use marijuana and mobile sports betting with an eye toward leveraging the new industries for tax revenue in the next few years.

On Sunday, Senators Chuck Schumer and Kristen Gillibrand said the "rescue plan" recently announced by president-elect Joe Biden included $50 billion in overall aid to New York State, much of it in the form of unemployment benefits and direct aid to families and small businesses. It is unclear how much of that stimulus would go into the state's operating fund.

In any scenario, the executive budget envisions a combination of federal aid, spending reductions, and new or expanded revenue streams to close the gap. Cuomo is also calling on Congress to repeal the so-called SALT cap, which was passed by Republicans in 2017 and has increased taxes for New Yorkers (more than any other state by the governor's calculations) by limiting their ability to deduct high state and local taxes from their federal taxes. The governor’s assessment of the SALT cap impact on New York has been in dispute since before the law passed, given the new tax code had many other elements, some of which offset that new cap.

With or without the higher tier of federal aid, the plan outlines the state's current position in choppy financial waters, and continues an unusual budgeting process that gives the governor expanded wait-and-see powers to alter future finances, which began with uncertainty around federal aid in the current year's budget. If less federal funding comes or if a stimulus package isn't passed by Congress before April 1, the state will have to "reopen the budget and [make] additional cuts," according to budget director Robert Mujica, at a press briefing Tuesday.

The state has been withholding close to $3 billion in aid to localities, under emergency powers granted to Cuomo by the State Legislature last spring, with the ability to make them permanent reductions.

The pandemic crushed the state economy last year. Sporadic stimulus aid, tentative recovery in some sectors, and ongoing strength in others have left New York in better shape than officials initially expected. But projected budget gaps over the next three fiscal years, while smaller than previous mid-year estimates, remain high.

New York State is forecasting a two-year revenue loss of $19 billion compared to pre-pandemic projections, and a new four-year budget gap of $39 billion. A bulk of the drop is from lost tax revenue from shuttered businesses and unemployment, though the impact of the latter has been mitigated to some extent by the state's higher-income earners remaining relatively job secure, while low-wage workers have borne the brunt. Tax receipts are still $2.5 billion below the same time last year, according to the Office of the State Comptroller.

The adjusted forecasts in the executive budget, which envisions $6 billion in federal aid, project gaps of $10.5 billion in fiscal year 2023 (which begins April 1, 2022), $10.8 billion in FY 2024, and $12.3 billion in FY 2025. Even with the full $15 billion in desired federal aid, New York State could face severe gaps in the so-called "outyears," though a lot will depend on both potential additional federal aid and the recovery from the covid crisis.

Cuomo’s executive budget plan is virtually the same size as the current Fiscal Year 2021 budget, and it will now become the basis of legislative hearings and negotiations with the two Democratic majorities, as well as continued pleas to federal officials.

Largely related to the demands of the coronavirus pandemic on daily life and public health, the proposed budget increases spending on school aid and Medicaid grew, while executive agency spending remained flat in the plan, and spending in other areas dropped across the board.

School aid spending in the new executive budget is up roughly 7% to close to $31.7 billion from the current fiscal year. Medicaid spending, buoyed by ongoing, but temporary, emergency reimbursements from the federal government, is up 4.7% to $24.2 billion in Cuomo's new plan.

Other spending the governor outlined includes money for recently announced projects, like $306 billion for infrastructure statewide and $29 billion invested into the green economy; $20 billion to create or preserve 100,000 units of affordable housing; $1.3 billion in rent relief; and $128 million for homeless services. The state is also set to spend to cap broadband internet at $15 per month for low-income New Yorkers, $150 million on food programs, and $10 million on legal fees for undocumented immigrants.

As part of the pandemic recovery, Cuomo has proposed $130 million in tax breaks for small businesses, restaurants, and performing arts venues damaged by the economic shutdown. Another $40 million will go into an "Infectious Disease Resiliency Commercialization Fund," for research and development in "life sciences, biotechnology and biodefense."

In order to close the $15 billion two-year gap, the Cuomo administration is relying on the anticipated minimum of $3 billion in federal aid (one half of the two-year, $6-billion "worst case scenario"); $1.5 billion in federal Medicaid reimbursements; $2.5 billion in unearmarked Coronavirus Relief Funds, which is another federal stimulus stream created under the CARES Act last March; and $2 billion in tax revenue (including improved forecasted revenue and an income tax hike for the highest earners). The remaining gap would be closed by reducing school funding by $1.5 billion, health-care spending by $1.8 billion, and $2.7 billion in other spending reductions. The executive budget authorizes the state to issue up to $8 billion in borrowing.

Much or all that could be avoided if the state secured the federal government's full $15 billion in before the budget is enacted in April, Cuomo said Tuesday.

"While that would be beneficial in the short run, it still would leave the State with significant future gaps," said Andrew Rein, Citizens Budget Commission president, in a statement. "No matter the level of federal aid, the State should be pursuing structural spending reforms to ensure that its finances are stable coming out of the recession.”

Withholding Aid to Localities
In the face of an $8.2 billion revenue shortfall this fiscal year, the state was able to reduce spending by freezing new contracts, hiring, and state employee pay raises, and withholding local aid payments to the tune of 20%, or $2.9 billion in December -- part of the governor's expanded budget powers. Most of that aid the state plans to pay in the last quarter of the current fiscal year (January through March) thanks to improved revenue projections due to new federal coronavirus relief and Medicaid reimbursements. The 20% withholding was initially temporary with the possibility for the governor to make all or parts of it permanent if the state didn't fill the budget gap. By the end of the fiscal year, if the state receives the $6 billion in federal funding, the withheld state aid will amount to roughly 5%, according to the executive budget.

Revenue
After some sectors of the economy rallied late last year, the momentum is beginning to level off. The state Division of the Budget estimates that GDP will reach pre-pandemic levels by the second half of 2021, but employment will likely lag behind previous highwater marks for years, not reaching peak levels until the first quarter of 2023.

Compared to revenue projections from February 2020, just before the state-mandated closure of in-person business and the economic contraction that ensued, the state is currently facing a $10.2 billion tax revenue drop in the current fiscal year (FY21) and an $8.8 billion drop next fiscal year -- a total of $19 billion in lost receipts over two years, according to state budget director Robert Mujica.

If the state receives the lower level of projected federal aid, Cuomo said the state will pursue an income tax increase on millionaires from a rate of 8.82% to a 10.8% tax rate, tracking proposals made in the State Legislature, which he said would raise roughly $1.5 billion. If the full $15 billion on the state's federal wishlist comes through, Cuomo said he would avoid the tax hike.

"We have a responsibility to ensure our recovery and that this recovery is not balanced on the backs of the hard hit New Yorkers," said State Senate Majority Leader Andrea Stewart-Cousins in a statement Tuesday. "The wealthy have gotten wealthier during this crisis even as the Middle Class has shrunk and millions of New Yorkers have struggled to make ends meet. We must be ready to act as a state to advance efforts to raise revenues, including having the hyper-wealthy share this burden."

The Cuomo administration believes legalizing mobile sports betting -- more of a question of what form it will take, rather than whether it will happen, Cuomo said Tuesday -- will earn the state $500 million annually, once it is fully operational, which officials expect will take a few years.

Legalizing adult-use marijuana, which Cuomo has championed in previous State of the State agendas, would garner the state $350 million in tax revenue. But like sports betting will take three to four years to mature as an industry, and $100 million of that money has already been promised to be reinvested in the Black and Latino communities hurt by the War on Drugs.

Questions remain about long term changes to the economy, like how the growth of "telework" will impact the job market and real estate industry in the near and moderate future.