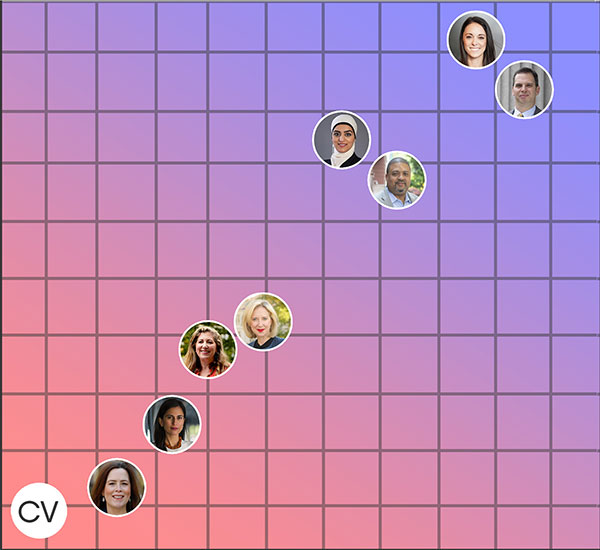 A coalition of New York City's public defenders has released a report analyzing the campaign policies of the Manhattan District Attorney candidates vying to replace incumbent Cy Vance, Jr., and their plans to implement those policies. Vance is unlikely to seek reelection and eight Democrats are running in the June primary.

The new analysis from Five Boro Defenders was conducted through the group's decarceral lens and based on criteria that would seek to shrink the role of both prosecutors and prisons in the criminal justice system. The eight candidates were ranked based on how "harmful" they would be to the communities represented by public defenders -- typically low-income New Yorkers, disproportionately people of color, and often already involved in the criminal legal system -- and how ready they appear to accomplish their stated platforms.

The coalition found Eliza Orlins, a public defender with ten years at the Legal Aid Society, and Dan Quart, the five-term Democratic Assembly member representing the Upper East Side, the two candidates likely to be both least harmful and most effective in implementing their policies as Manhattan's top prosecutor. On the other end of the spectrum outlined by the defenders -- and the closest to Vance who occupies the extreme lower end of the evaluation -- are Liz Crotty, a former Manhattan prosecutor and criminal defense attorney, and Tali Farhadian Weinstein, a former federal prosecutor who worked most recently as counsel for Brooklyn District Attorney Eric Gonzalez.

In the middle are several career prosecutors and a civil rights attorney who Five Boro Defenders found to have some combination of interest in reducing the power of the office, preference for alternatives to incarceration, and knowledge of the technical and political landscape at stake for an incoming DA -- but not necessarily all three.

Five Boro Defenders, which identifies itself in the report as "adversaries of the prosecutor and students of abolition," is careful not to call the rankings "endorsements."

"This race is interesting because we have a lot of candidates calling themselves progressive, whereas in interviews, in their statements and policy papers, they are not actually progressive," Takiya Wheeler, a public defender with Legal Aid Society who worked on the Five Boro Defenders report, told Gotham Gazette.

With protests erupting across the country last summer in the wake of George Floyd's killing by Minneapolis police, "diverting from the prison industrial complex is now something that the world is beginning to look at," she said.

"A lot of people are watching this race," she said, noting an emerging cohort of reform-minded prosecutors nationwide, like George Gascon in Los Angeles and Kimberly Foxx in Chicago.

The report is the third such election guide from the coalition and comes as the race for the Democratic nomination for Manhattan District Attorney heats up, with most of the candidates set to appear at a reform-focused forum Wednesday evening hosted by a large coalition of activist and other groups. It also comes amid a growing movement to minimize the traditional nodes of the penal system, from police enforcement to imprisonment, and a rise in shootings and murders in New York City.

The eight Democratic candidates were reviewed based on their level of commitment to holding prosecutors accountable and reducing their budgets, sentencing that avoids incarceration, ending cash bail and pretrial detention, and upholding the presumption of innocence until proven guilty. The group also looked at candidates' dedication (or lack thereof) to ameliorating systemic racism, holding police officers accountable, "ending the criminalization of poverty, mental illness, and substance abuse," and "correcting past harms."

"We believe Eliza Orlins has a slightly higher degree of commitment to reducing the harm perpetuated by carceral prosecution as well as a deeper understanding of the systemic racism that pervades all aspects of the system, while Dan Quart presented a slightly more nuanced understanding of the way the system is put together and more detailed plans for how to take it apart," reads a press release accompanying the report, reviewed by Gotham Gazette just ahead of its public release.

Orlins, the only public defender in the race, is a former member of Five Boro Defenders who left the coalition when she stepped into the district attorney race, according to a disclaimer in the report. She supports a smaller district attorney office and 50% reduction in the NYPD budget, among the largest reductions supported by any candidate. The coalition believes Orlins has "a deep understanding of the damage mass incarceration has caused Black and Brown communities," stemming from her time as a public defender, though she does not have strong ties to local organizers and community-based organizations, the report states.

Quart, similarly, had a strong decarceral platform and history of championing criminal justice reforms in Albany, like changes to bail and discovery statutes and the legalization of "gravity knives," the criminalization of which has ensnared working class New Yorkers of color in the criminal legal system. The report says his familiarity with legislative and budgetary processes, and knowledge of the discretionary powers of the district attorney make him "unique among the candidates."

The authors of the report want to see the status quo of punishment transformed, from the traditionally familial relationship between prosecutors and police to the role of district attorneys in supervising individuals post-trial. In some areas, the report chastises candidates for "buy[ing] into the criminal punishment system" as is the case with Alvin Bragg, a former Deputy Attorney General in New York, who told the coalition he would not minimize the district attorney’s powers. Nevertheless, the group appreciated his commitment not to prosecute many "broken windows" lower-level violations and his understanding of how to change criminal court.

On the flip-side, Tahanie Aboushi, a civil rights lawyer in her family's firm, "had a more profound commitment to decarceration" and supported minimizing the office, according to the press release, but in interviews with the defenders "frequently lacked a clear understanding of the mechanics of the criminal courts and a plan for accomplishing these objectives." 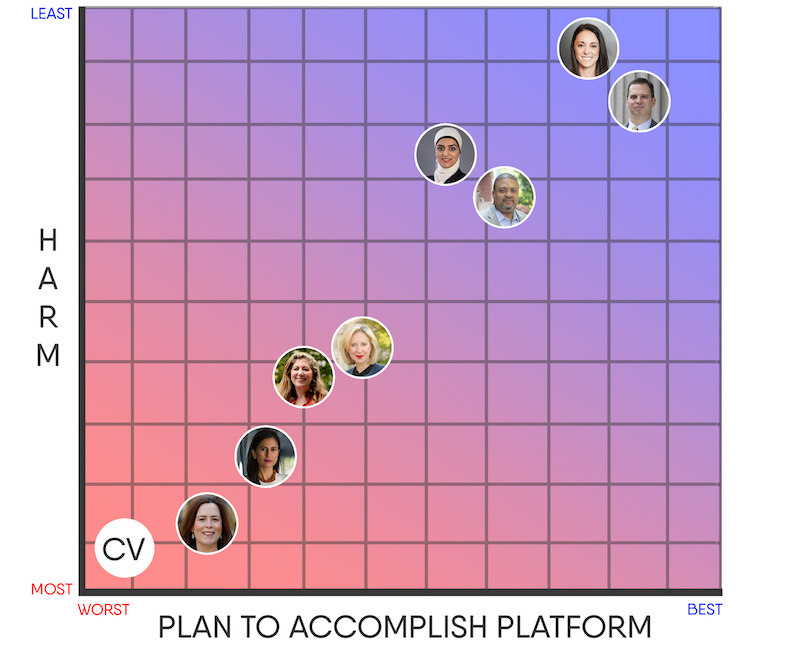 Among the "most harmful" and least ready to execute reform plans on the Five Boro Defenders' list, the coalition found Tali Farhadian Weinstein -- who has raised the most money in the field and has garnered some high-profile endorsements -- to be "especially dangerous." The defenders questioned her self-styling as a "progressive prosecutor" based on her deference in interviews to federal sentencing policies, which the coalition view as detrimental to poor communities and people of color. "During our interview, she generally refused to make categorical commitments which we presented as solutions for systemic change and made clear a desire to maintain the discretionary ability to prosecute low-level offenses," the report states, noting she does not have a list of charges she would decline to prosecute, unlike other candidates.

Being "the only candidate who doesn't self-identify as a progressive or decarceral prosecutor," Crotty was also rebuffed by the coalition of public defenders. The group was alarmed by what it said was her myopic view of the district attorney's role in perpetuating racist structures within the criminal legal system. In her interview with the coalition, Crotty said she would continue to seek jail time for some misdemeanors, a stance other candidates are moving away from.

Both Lucy Lang and Diana Florence are former Assistant District Attorneys under Vance, and were viewed more favorably by Five Boro Defenders than Farhadian Weinstein and Crotty, but received demerits for putting forth only "modest" proposals for reform. In Florence's case, the group gave weight to her resignation from the district attorney’s office early last year for not disclosing evidence in a case.

Primary elections will be held in June, with a nine-day early voting period June 13-20 and election day June 22. The Democratic nominee for Manhattan District Attorney is all but assured to win the general election in the heavily-blue borough.