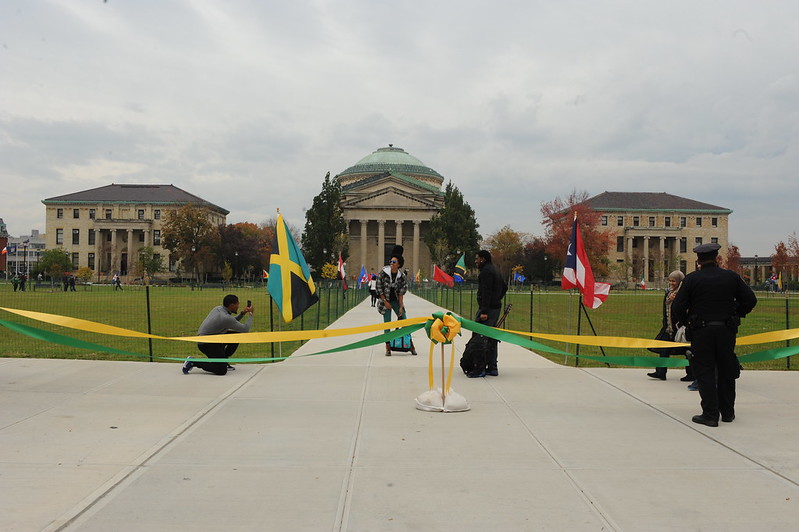 The hearing was the sixth in a series of 13 on Governor Andrew Cuomo’s fiscal year 2021-2022 executive budget plan being held by the State Senate and Assembly, chaired by Senate Finance Committee Chair Liz Krueger, a Manhattan Democrat, and Assembly Ways and Means Committee Chair Helene Weinstein, a Brooklyn Democrat.

Stakeholders from both CUNY and the State University of New York were present, including Matos Rodriguez, SUNY Chancellor Jim Malatras, CUNY Senior Vice Chancellor and Chief Financial Officer Matt Sapienza, and members of advocacy groups and student governments from both university systems.

Each chancellor had 10 minutes to speak about their school system and what they’ve done with current funding levels, including coronavirus responses.

“On behalf of the entire CUNY community, I want to thank [Gov. Andrew] Cuomo, the state Senate and the state Assembly for your past and sustained support, which has enabled CUNY to deliver strong results for our half-a-million students and citizens of New York,” Matos Rodriguez said in the opening remarks of his presentation. “2020 was a year that both demanded and inspired great fortitude and resourcefulness from our students and faculty, staff and leaders.”

According to the CUNY staff and faculty union, state funding covers about 60% of CUNY’s operating budget for its senior colleges and their entire capital budget, while student tuition provides about 40%. The New York City government contributes more toward the community colleges, though the state provides about a third of their operating budgets. And the state also “helps students through the Tuition Assistance Program, subsidized loans, and specialized scholarship and grant programs,” as well as “the Education Opportunity, SEEK and College Discovery programs which benefit many low-income minority students at CUNY.”

Due to the coronavirus pandemic, Matos Rodriguez explained, the university’s spending looked different than in past years.

The federal Coronavirus Aid, Relief and Economic Security Act, or the CARES Act, allowed CUNY to set up the Chancellor’s Emergency Fund, which in part provided a $600 grant to more than 10,000 students in financial need as a direct result of the pandemic.

CARES Act funding was also to be used for institutional expenses that came as a result of the pandemic, such as to facilitate online learning.

“The coronavirus was largely a remote concern when the year began, but it soon gained a foothold in New York that forced CUNY to all but shut down its 25 campuses on March 12 and quickly pivot to distance education,” Matos Rodriguez said. “When classes resumed after a week-long academic recess, 95% of the university’s 50,000 course sections had transitioned to online instruction. We quickly realized that thousands of students lacked the tools to participate in distance learning and, with the support of the governor, we purchased 33,000 laptops and tablets and made sure they were safely distributed to students in need, as well as provided 4,000 personal hotspots for those students who required enhanced wifi capability.”

Matos Rodriguez went on to talk about some of the more positive things that happened during the past school year. He said that 56,527 degrees were earned by students, the second highest total number of degrees given out in a single year in CUNY history — and just under the record high total, which came from the previous school year.

CUNY increased the number of mental health counselors across its campuses and began a new partnership with the New York Jobs CEO Council, which works with CEOs of large New York companies to create a direct path for employment for CUNY graduates.

He also mentioned that within the past year CUNY Central has appointed nine new college presidents — including someone to replace Matos Rodriguez himself at Queens College when he became the chancellor — who come from diverse backgrounds and identities.

This new cohort includes the first two Asian-American campus presidents ever at CUNY, along with three female presidents and three African-American presidents.

“Since I was appointed chancellor a year-and-a-half ago, we have continued to assemble a cabinet and college presidents of unprecedented expertise and diversity, who reflect the city we live in and the students that we serve,” he said.

As for the 2021-2022 budget, the chancellor went on to say that the focus will be on handling the pandemic and its impacts, including students’ mental health, in addition to expanding the nursing program and the CUNY Corps internship program, and increasing the number of racially diverse full-time faculty across all campuses.

He then went on to address what he feels the university needs in the 2021-2022 budget, though he did not mention any specific dollar figures, only general requests for additional funding.

“Looking ahead to life after covid, we will double our efforts to help students succeed, graduate on time and find sustainable career paths,” Matos Rodriguez said.

The budget request also is asking for increased capital funding for the informational technology systems that have been keeping the university running during the pandemic. Funding for capital construction on the various campuses is hopefully coming from the federal government, Matos Rodriguez added.

Moving into the Q&A, Assemblymember Glick asked about, among other things, enrollment and retention rates at CUNY.

After the covid outbreak in New York, CUNY enrollment for the fall 2020 semester reportedly followed national trends and decreased by 3.7% from the previous year, including by 800 students who the chancellor said had graduated from New York City Department of Education public schools in June 2020 and were at one point enrolled with CUNY but never arrived.

Matos Rodriguez said that Executive Vice Chancellor and University Provost José Luis Cruz has been working with the Department of Education to identify who these missing 800 students are and why they never showed up in their CUNY classes at the start of the 2020-2021 academic year.

Brooklyn Assemblymember Phara Souffrant Forrest, a two-time CUNY graduate and a newly-elected Democrat, asked the chancellor about the 2% pay increase that was promised in the recently re-negotiated staff contract, which has not been included in the 2021-2022 budget.

“This was a very, very difficult fiscal year and this was a year also in which we’re dealing with a lot of unprecedented changes coming our way,” Matos Rodriguez said in response. “So, we had to take a number of decisions to protect the overall university, and to do that members of the senior management took a five-day furlough. We created a Vacancy Review Board to provide good use of our hires and personnel in a way that was consistent with the fiscal times that we’re facing.”

CUNY had signed the staff and faculty contract at the beginning of Matos Rodriguez’s tenure as chancellor, but the school decided that the salary increase had to be delayed due to the extenuating circumstances caused by the pandemic, though Matos Rodriguez said he hopes to reinstate the raise as soon as things become more stable.

Senator Diane Savino, a Brooklyn and Staten Island Democrat, brought up the CUNY School of Labor and Urban Studies, which has grown in enrollment — up by 12% during the pandemic, according to Svaino — but not enough in campus size over the past few years. The school’s library has also been closed for five years.

CUNY has increased the school’s space by 12%, Matos Rodriguez said, and the university is in talks with landlords to see where more physical space for students to learn can be added, but this is not the only plan.

“Many of the courses provided, for example, by the School of Labor Studies, occur in the evening,” he explained. “We have some campuses that most of the classes happen during the day and are nearby, and we’re trying to see if we can more effectively use the space. Long term, we’re also thinking about where the school could be housed. There’s a couple of other possibilities in the Manhattan area that we’re looking at, and that might be a possibility to meet other needs and maybe also create some shared space; for example, if they’re with another combined CUNY facility, things like the library can be a joint facility that would be better for the students there and everyone around.”

Other questions asked to Matos Rodriguez by legislators were, among other things, on the topics of faculty to student ratios, free tuition at the community colleges, student food stamp (SNAP) enrollment, and the Accelerated Study in Associate Programs (ASAP).

On the subject of student to faculty ratios, which Glick asked about, Matos Rodriguez said, systemwide, the ratio is currently 22-to-1. He said that the ratio has been consistently between 21 and 22 students for each professor for the past five years, but this statistic is not broken up by part-time and full-time faculty.

Assemblymember Rebecca Seawright, another Manhattan Democrat, asked what it would cost to implement free tuition at the community colleges, considering how many students at those schools are eligible for the Tuition Assistance Program (TAP), the Pell grant, and other financial aid programs.

Matos Rodriguez said that he and his team had some estimates that he could send to the legislators, but no definite numbers to share at the moment, before adding that there needs to be more clarity on the meaning of this question.

“The one thing I want to say about this question, too, is that folks need to define what ‘free’ means,” he said. “Is it first dollar? Last dollar? There’s a lot of nuances as to how free college and free community college can be done and I think it’s important that as we go into this debate, even those of us who are supportive of things like this, that we get into the nuances, because that can mean — what we want is the most affordable quality community college and four-year college experience.”

Senator Krueger asked the chancellor about SNAP and whether CUNY has an internal or systematic way of notifying students who may be eligible for the program.

He responded that, since the governor announced an expansion of the SNAP program, CUNY has referred 7,000 students. The university’s CUNYfirst online student portal already had been identifying potentially eligible students, letting them know they may be eligible and connecting them to the city’s Human Resources Administration (HRA) before the governor’s announcement.

Senator Toby Ann Stavisky, a Queens Democrat and chair of the State Senate Higher Education Committee, inquired about the ASAP program, the funding for which was cut by about $2.5 million.

“ASAP is very important to us,” Matos Rodriguez responded. “It’s a national model now. Seven states replicate the work that we’ve been doing at ASAP. The Kennedy School gave us an award on innovation last year because of the results that ASAP has provided.”

“We hope that we can get that funding back at the state level,” he continued. “The ASAP program has also been targeted for cuts at the city level, but we’ve been trying to have conversations to restore those. Because they target one of our most successful programs, it has an impact on enrollment. A lot of the students are attracted for the benefits that the ASAP program provides and the effectiveness of ASAP, so we lose enrollment. So, it’s a cut that cuts a program and cuts our enrollment base. It hits us twice, and then it hits us a third time when that student that is going to finish at a faster rate than others does not transfer to a four-year school.”