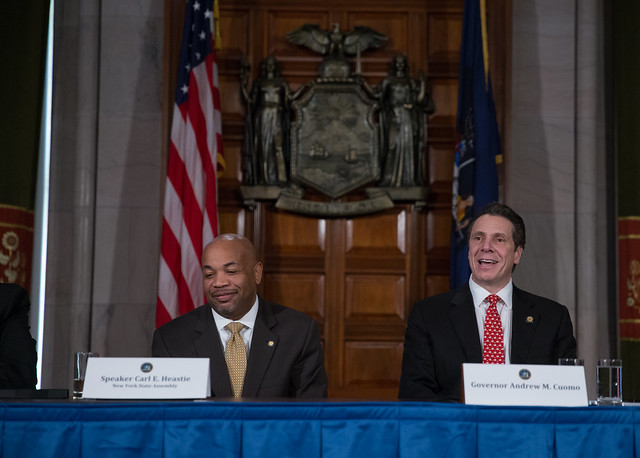 The New York State Assembly’s judiciary committee convened a virtual hearing Tuesday morning to outline the wide-ranging scope of its impeachment investigation into Governor Andrew Cuomo, who is embroiled in a series of compounding scandals related to allegations of sexual misconduct, abuse of executive authority, and orders related to COVID-19 and nursing homes, the death toll among nursing home residents, and handling of data around nursing home resident fatalities due to COVID-19.

The investigation, Assemblymember and committee chair Charles Lavine estimated, could take months to resolve. On Tuesday, Lavine, a Democrat from Nassau County, and other members of the Assembly judiciary committee asked questions of attorneys from Davis Polk & Wardwell LLP, the law firm hired by the Assembly to conduct much of its inquiry. The hearing came as Cuomo is facing multiple investigations by federal prosecutors, the New York Attorney General’s office, and the Assembly.

Cuomo, a third-term Democrat, faces mounting legal challenges from the various scandals surrounding his administration and his behavior in office. After being praised by many as a competent steward during the early months of the pandemic last spring, questions lingered around some of his early decisions about closing down the state, New York’s large death toll both in and out of nursing homes, and the governor’s decision to write a book about his pandemic leadership.

That leadership came under significantly more scrutiny after a report from State Attorney General Letitia James’ office in January showed that his administration had undercounted covid deaths of nursing home residents, some of which may have been linked to a controversial directive from the governor’s administration last year that said nursing homes could not refuse to admit residents who had tested positive for the virus.

In the following months, after the governor threatened the career of Assemblymember Ron Kim, a fellow Democrat who had been a consistent critic of the nursing home policies, a crescendo grew. Report after report emerged about the toxic workplace environment Cuomo fostered and the tactics of bullying that he and his top aides employed. More than half-a-dozen women, including current and former aides of Cuomo, came forward with allegations that he had sexually harassed them, touched them without their consent, or otherwise behaved in inappropriate ways.

The governor denied most of the claims while acknowledging and trying to excuse away some of the behavior and apologizing for making people uncomfortable. He has refused to step down from office despite sweeping calls for his resignation from a majority of state lawmakers, most of the state’s congressional delegation, and even New York’s United States Senators Chuck Schumer and Kirsten Gillibrand.

The Davis Polk & Wardwell impeachment inquiry team includes top lawyers Greg Andres, Angela Burgess, and Martine Beamon. The firm is expected to launch a helpline for the investigation to hear from potential witnesses.

“We will carry on our responsibilities fairly and with due process for all involved,” Assemblymember Lavine said in his opening statement at Tuesday’s hearing. He pointed to the expansive purview of the probe “including, but not limited to” the allegations of harassment and abuse, whether the governor tried to cover up the number of deaths at nursing homes, and whether Cuomo knew or told executive branch employees to hide information about structural safety concerns at the Mario M. Cuomo Bridge.

“[D]ue process is not just a precept. It's not just at the heart of what makes us New Yorkers tick. It's at the heart of our American democracy as well,” added Lavine, who is a criminal defense attorney by training and has previously worked for the Legal Aid Society and in private practice.

He also presaged the timeline for the investigation. “At this early stage, it's not possible to say precisely how long the investigation will take...Given the breadth and seriousness of the issues under investigation, we expect that the timing will be in terms of months rather than weeks,” he said.

“The allegations before this committee are as disturbing as they are serious,” said Assemblymember Michael Montesano, the ranking Republican on the committee. Montesano urged the committee and the law firm to take several measures to ensure the integrity and confidentiality of the investigation. He called for in-person committee meetings to avoid hacked Zoom calls, routine updates from the firm to ensure transparency, and transcripts and reports of interviews and depositions with witnesses.

“As for the substance of the allegations before this committee, everything is on the table,” he said, calling on the firm to not only look into the nursing home data and sexual harassment accusations but also the contract for the book that Cuomo released in October celebrating his covid leadership even as the state was already seeing a second surge after the better summer months and on its way toward more than 40,000 covid deaths.

Several members of the Assembly judiciary committee expressed a key concern raised in recent news reports and from the lawyer for former Cuomo aide Charlotte Bennett, one of his accusers, about potential conflicts in the choice of firm. If Cuomo is impeached by the Assembly, one of the jurors in the Senate trial would be State Court of Appeals Chief Judge Janet DiFiore, a key ally who is also married to Dennis Glazer, a former partner at Davis Polk.

Lavine, however, insisted that the Assembly had thoroughly vetted the firm.

The firm also offered a defense. “We have a very robust process within Davis Polk for ensuring that for any assignment that you take on, that we do not begin that matter with any conflicts of interest,” said Burgess. “And so we do a search throughout the firm and through our management committee to ensure that there are no conflicts of interest that would either as a matter of ethics or appearance create an issue. And we embarked on that process here and concluded that there was no conflict.”

The rest of the members of the committee spent the next hour pressing the attorneys on the process and logistics of the investigation, on implicit bias, the pressures of a high-profile case, among other issues.

Assemblymember Jenifer Rajkumar, a Democrat, asked the lawyers how they would avoid their own implicit biases from affecting the probe and avoid external pressures.

“We have routinely worked on matters where there is substantial press attention and pressure and the like, and we're accustomed to working under those circumstances,” Andres responded, insisting that the firm would share information with the committee “in many respects in real time or certainly on a regular basis” which would also act as a check on any bias.

“The question of implicit bias is an excellent one. It's something that we pay close attention to, both in investigations and in our everyday practice, and one that we're very focused on at all times,” Beeman said.

Assemblymember Phil Steck, a Democrat, asked whether the investigation would also cover discrimination in hiring in the governor’s office, the hostile work environment and acts of retaliation undertaken against on of Cuomo’s accusers, Lindsey Boylan. After Boylan alleged that the governor had harassed her, the executive chamber publicly released her personnel records and even planned an attempt to discredit her that was eventually abandoned, as reported by the New York Times. Boylan has said she will not participate in the probe because of the conflict, through she is cooperating with the AG’s investigation. Bennett’s attorney, Debra Katz, has also criticized the selection of the firm.

“Of course, subject to the committee's view, we would expect that all three of those subject matters that you have referenced here would be part of this investigation, and all are important aspects of any investigation with respect to sexual harassment or any aspect of sexual misconduct,” Beeman said.

Lavine also announced later that he had already warned the executive chamber, “putting the governor on notice that he and his employees and allies should take no steps towards intimidating any witness or any potential witness.”

Assemblymember Rebecca Seawright, a Democrat, questioned the attorneys on the methods they intended to use during the probe.

“We'll use all methods available to us and all tools for gathering information,” Andres said. “So that will include interviews. It could involve interrogatories if we found that to be necessary. Certainly we’ll request documents and we'll consider the use of subpoenas to ensure that the documents are produced and that there isn't any obstruction or any destruction of documents in the course of providing and preserving documents.”

The witnesses, he said, would not be limited, “whether it's current staff or prior staff, or folks who have retired or not, whether they have an official position in the government or otherwise. We'll follow all the leads from our investigation and interview any necessary witnesses.”