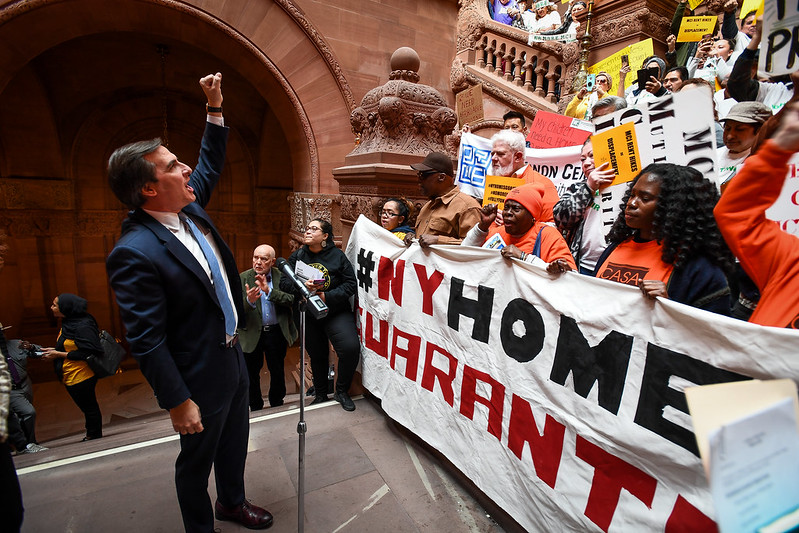 A proposal to convert financially strapped hotels and other commercial properties into permanently affordable housing has been included in the State Senate's one-house budget proposal and is garnering support from a broad group of interested parties while new federal stimulus money is being eyed to fund the proposal.

The "Housing Our Neighbors with Dignity Act," or HONDA, would create a program for the state to acquire distressed commercial properties and transfer them to affordable housing developers to convert and operate. Supporters, which include housing advocates and developers alike, say the proposal would harness usable real estate left vacant or underutilized by the pandemic and economic crisis and put it toward housing tens of thousands of homeless New Yorkers and the exceedingly large number of housing-insecure residents.

"It's a win-win if we do it right," said Deputy Senate Majority Leader Michael Gianaris, a Queens Democrat and the bill's Senate sponsor, in an interview. "If we can identify the resources to purchase those properties and use them for the kind of housing we need it would be a very elegant solution."

The legislation, first introduced in the Senate on March 2, now has a companion in the Assembly and is being advanced in state budget negotiations. A large group of backers has come out in support of the proposal, including housing service and advocacy groups like VOCAL-NY, Community Service Society of New York, Housing Works, The Legal Aid Society, and the Strong Economy For All Coalition, and supportive housing developers like Gateway Housing, among others.

New estimates from Gianaris' office put the program's total cost at over $2.2 billion to get it to the needed scale to address the tens of thousands of homeless New Yorkers sleeping in shelters each night, though the Senate has not settled on estimated numbers of convertible properties or target units. The Senate's one-house budget bill -- which along with the Assembly’s create a framework for negotiations among legislative leaders and the governor -- includes $250 million in state funding for the program. Gianaris said he hopes the remainder of the funding will come from federal stimulus dollars in the recently-passed American Rescue Plan, either through the $12.6 billion in direct aid to state government or in a dedicated program.

What is now a joint legislative proposal is somewhat similar to one announced by Governor Andrew Cuomo, a third-term Democrat currently embroiled in multiple scandals and widespread calls for his resignation, in his State of the State agenda in January to convert ailing properties into housing, but adds requirements that the housing must be affordable and at least half of all units be reserved for homeless individuals.

"What we don't want to do is just take those properties and hand them over to wealthy developers that build even more luxury units because that would be a wasted opportunity to make progress on this issue," said Gianaris, adding that is what he believes Cuomo's proposal could do. (Gianaris and Senate Majority Leader Andrea Stewart-Cousins are among those who have called on Cuomo to resign amid a long list of sexual harassment allegations and other scandals, while the Assembly has begun an impeachment inquiry.)

On Friday, a companion bill was introduced in the State Assembly and the same day Assembly Speaker Carl Heastie, a Bronx Democrat, signaled support for including it in the state budget: "In this year's budget, we support HAVP, a sustainable statewide MAT, removal of prior authorization for life saving medication, and we are exploring ways to expand access to housing for the homeless by using vacant and under utilized spaces to do so," he wrote in a tweet.

"Budget negotiations are ongoing," said Freeman Klopott, a spokesperson for the New York State Division of the Budget, which is part of the gubernatorial administration, in response to inquiries about the Senate's budget proposal. A spokesperson for New York State Homes and Community Renewal, the state housing agency, said the legislation was under review.

In a statement, the bill's Assembly sponsor, Assembly Member Karines Reyes, a Bronx Democrat, said the state's "weak rent moratoriums and insufficient rent relief programs" had not gone far enough to protect low-income residents from eviction, especially in communities of color. "The conversion of office units and distressed hotel properties into housing units would greatly bolster the number of beds available to New Yorkers in need, as well as assist businesses that are getting back on their feet," she wrote.

The program would entail the state buying property and selling or leasing it to developers and non-profits that would manage the buildings and in some cases provide supportive services. The legislation would require at least half of all converted units be reserved for people experiencing homelessness. Affordability would include people making 50% of the area median income or less, and rent would be capped at 30% of income, the threshold for being considered “rent-burdened.”

Pre-pandemic, the demand for supportive housing outpaced the number of available units. For every vacant supportive housing unit there were five approved applications, according to a Coalition for the Homeless report released in March of 2020. The number of single adults staying in shelters across the city nightly has grown 143% over the last decade, from 7,700 in 2009 to nearly 18,700 in December 2019, according to the report. The New York City Department of Homeless Services reported a nightly average of 17,741 single adults sleeping in city shelters in fiscal year 2021.

"I’ve been living in the shelter system for over 5 years. Like so many others, I'm stuck here without any real pathway to get out and find permanent housing. I’m tired of living there and I’m tired of being told my needs are not a priority. We need our leaders to support HONDA and put our state on track to end homelessness,” said Milton Perez, who is homeless and a leader at the housing advocacy organization VOCAL-NY, in a statement.

“Quickly converting distressed hotels into permanent housing that is affordable to New Yorkers experiencing homelessness is a once-in-a-generation opportunity we need to respond to now," said Ted Houghton, president of Gateway Housing, a nonprofit specializing in converting city shelters.

While the bill defines distressed properties broadly to include office buildings and others, its drafters are eying the hotel industry, which has been particularly hard hit by the drop in tourism and lends itself physically to conversion into housing.

In January, the Hotel Association of New York said roughly 200 of the city's 700 hotels had shuttered since the pandemic began, NY1 reported. As the Wall Street Journal recently reported, the hospitality data firm Smith Travel Research found hotel occupancy in the city was 47% in mid-March, an encouraging rise from 38% in January, but far lower than pre-pandemic levels.

Only a quarter of members of the New York Hotel Trades Council, a union representing a majority of the city's hotel workers, are currently working, according to a source close to the union. The source, who was not at liberty to fully discuss the plans, said that the union is reviewing the various hotel conversion proposals and is comfortable with Gianaris'.

According to Deputy Mayor for Housing and Economic Development Vicki Been, the de Blasio administration is currently looking at ways to convert failing hotels into single resident occupancy (SRO) housing, a type of affordable housing option that often comes with supportive services but lacks certain amenities like private kitchens. The mayor's office did not immediately return a request for comment on the HONDA proposal.

Last fall, the developer Fairstead closed a $60 million deal to acquire Park 79 Hotel on Manhattan's Upper West Side and convert it into 77 affordable apartments for seniors.

A similar hotel conversion took place in 2018 when Breaking Ground, a supportive housing nonprofit, purchased a hotel in downtown Brooklyn for $170 million using a $157 million loan from the city's Department of Housing Preservation and Development. Under current economic conditions, Breaking Grounds estimates conversions to SROs would cost half what new construction would per unit, though groups like VOCAL-NY want to see more conversions into full-use permanent apartments like the 2018 project.

Gianaris said his office and supporters of the bill are working with United States Senate Majority Leader Chuck Schumer, a Brooklyn Democrat, and New York's congressional delegation to carve out funding from the American Rescue Plan -- the $1.9 trillion federal stimulus package that was enacted earlier this month, with up to $100 billion heading to New York State for a variety of uses and through many channels (individuals, businesses, governments, and more). Gianaris is hoping lawmakers in Washington establish a program explicitly for converting distressed properties but that there is some flexibility in other funding pots, especially the $12.6 billion in direct aid New York state government is receiving.

"We're working closely with our federal representatives to unlock some assistance for programs exactly like this," Gianaris told Gotham Gazette. "There is a certain amount of aid that is unrestricted, we can certainly use that."

A spokesperson for Schumer did not comment directly on the state's proposal but told Gotham Gazette the American Rescue Plan included relief funds that could go toward assistance to hard-hit industries like hospitality and tourism.