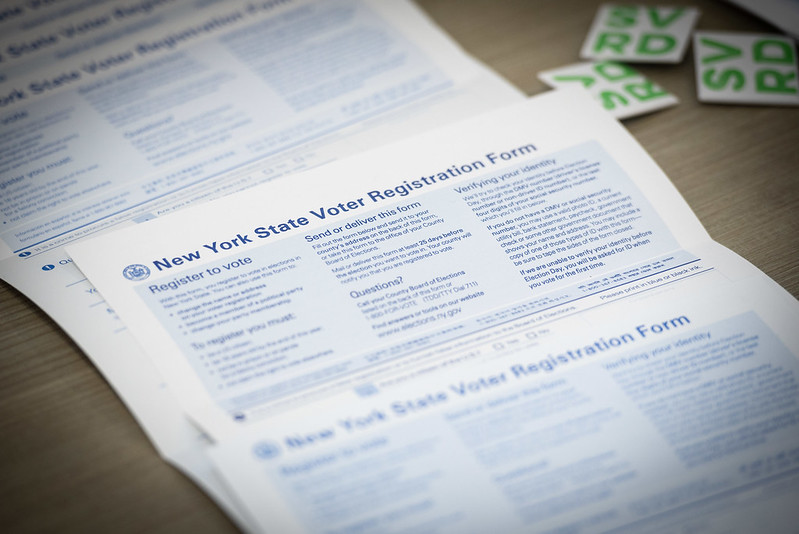 The New York State Board of Elections is a year or more behind implementing a statewide online voter registration system, setting it up to blow past an April 12 deadline that would have allowed potential New York City voters to take advantage of the system ahead of the consequential primaries in June.

"There is no way that we are going to comply with the statutory deadline because we've lost more than a year because of the delay in funding the project," said State Board of Elections Co-Chair Doug Kellner at the March 15 meeting, which was held virtually. "We're now talking about many months perhaps even more than a year after the deadline before the system will be ready."

"It's not that we dragged our feet, it's that the [state] didn't give us adequate funds to do it. But nonetheless, the reality is we have a statutory date and we have to try to meet it," Co-Chair Peter Kosinski said, reminding everyone that the April deadline is set by the law creating online voter registration in New York.

Freeman Klopott, a spokesperson for the state Division of the Budget, disputed the claim. “The FY 2021 Budget provided $16 million in funding for this project, it has been available, and the Board hasn’t drawn down any of it,” he wrote in an email to Gotham Gazette.

The State Board of Elections had received a $16 million allocation "only to have it frozen by Division of Budget on April 28, 2020," wrote Cheryl Couser, a board spokesperson, in an email responding to Klopott.

"The State Board had been prepared to issue a procurement to implement OVR at that time and had to stop our progress," Couser wrote. "In August 2020, when funds were unfrozen and the SBOE had to reassemble the OVR team, update the procurement documents, all during the administration of the 2020 Presidential Election amidst a pandemic."

New York City primary elections for mayor, comptroller, public advocate, borough president, and City Council, among other offices, will take place in June. The deadline to register to vote is May 28, 25 days before primary day, June 22 (there is also absentee voting and early voting before primary day).

In 2019, state lawmakers passed legislation to create an online voter registration system, run by the state Board of Elections, that would allow voters without a driver's license to join their county's voter rolls via the internet. The law requires the system to launch five days after certification and no later than April 12, 2021 -- two years after its enactment.

The only online voter registration currently in place is through the state's Department of Motor Vehicles and is limited to New Yorkers with driver's licenses. Efforts had been made in 2017 to create an online system at the city level for New York City residents, but disputes -- over the admissibility of a digital signature -- between the city Board of Elections (which keeps the local voter rolls), the city Campaign Finance Board (tasked by the city law with housing the online portal), and local lawmakers who created the system led to its scuttling in 2019.

The silver lining was the promise of the state portal, to be implemented before the city's consequential June 2021 primaries, where the next mayor will likely be determined from among the field of Democratic candidates given the very heavy Democratic tilt in the city.

"It's the 21st century. It's unacceptable that New York State still does not have a way for residents without a driver’s license to register to vote online," said Tom Speaker, an election analyst with the good government group Reinvent Albany, in an interview with Gotham Gazette.

"This was agreed on over two years ago, and New York City has had a system ready to go for two years, but many New Yorkers still won’t be able to register to vote online for the upcoming city elections. The state needs to provide funding for this program so that no more New Yorkers are left behind,” he said.

"The 2019 budget law required the system to be in place by April 2021 at the latest to avoid indefinite delays and ensure online registration was available in advance of the registration deadline for 2021 contests," said Jarret Berg, co-founder of the advocacy group Vote Early NY. "It's been a very challenging year with budget shortfalls, but this illustrates how access to civil rights can be squeezed despite what the law requires. Although we don't yet know what is in the 2021-22 budget, New York still has a ways to go to properly sync the funding and administering of modern elections."

The enacted state budget in fiscal year 2020 (from April 2019 through March 2020) included a combined $24.7 million to implement the new early voting system, including the purchase of electronic poll book technology necessary to run it. A press release from the State Assembly's Democratic majority on April 1, 2019 said the money could be used to implement an online voter registration system.

Last year, the state reappropriated the entire balance of the roughly $25 million for voting systems, and added an additional $16 million to implement online voter registration. After the freeze on the $16 million allocation ended in August 2020, the money was never spent and Cuomo included it again in his proposed fiscal year 2022 budget, which he released in January. Budget negotiations among the governor and legislative leaders are now intensifying ahead of the April 1 deadline for the FY22 budget and start of the state fiscal year.

At the March 15 State Board of Elections meeting, Kellner blamed the executive chamber for the year-long delay. "The Legislature provided the funding, it was the governor's office that...impounded the funds — wouldn't let us spend the appropriated money."

"Either way we didn't get the money that we need to actually go forward with the program," Kosinski replied.