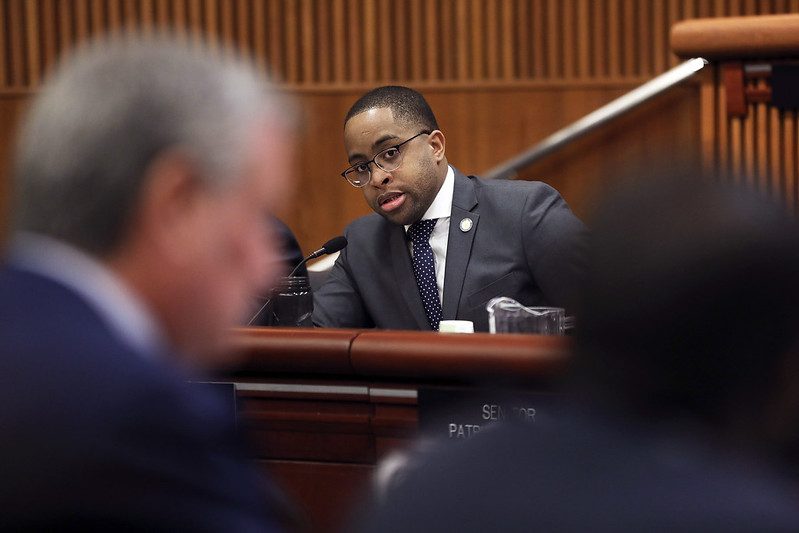 The New York State Senate election committee may be breaking the mold of cyclical and predictable debate about voting administration and its discontents with a series of public hearings meant to broadly chronicle the experiences and ideas of voters across the state.

The committee is holding four hearings "in every corner of the state" to give a platform to voters ahead of the traditional post-election oversight hearing where lawmakers interrogate election administrators and experts about how the process went. That hearing is scheduled for late September and will undoubtedly focus on election errors, particularly in New York City, and the rollout of the city's first major ranked-choice voting election in June. The hearings will be led by Senator Zellnor Myrie, a Brooklyn Democrat and the committee chair, who said he wants to use them to inform "the best solutions for reform and improvements."

"I wanted to hear directly from [voters] on what ideas they have for reform, how they felt the election went, and what they think we should be doing to improve the process," Myrie told Gotham Gazette in a phone interview. "Too often when we hold our hearings, most of the time is spent grilling the government institution of choice and then the public doesn't have that much time before the lawmakers."

While the public always has the opportunity to participate in post-election hearings, Myrie hopes holding multiple ones around the state geared specifically to everyday voters will yield a more detailed picture of election challenges and potential solutions. It could also provide a basis of public support for changes to the operations and structure of the State Board of Elections and local boards, now explicitly partisan and controlled in large part by party bosses, which experts say enables patronage, inefficiency, and incompetence.

"It's customary for us to hold town halls, we do a lot of community events. I sort of see it in that vein and in that spirit, where if you have an interest as a voter, you get put this on the record," Myrie said.

The first hearing is scheduled for Wednesday, July 28, at Medgar Evers College in Brooklyn. Members of the public can participate in person or submit written testimony remotely. Two more hearings are scheduled for next week: the first at SUNY College of Environmental Science and Forestry in Syracuse on August 4, and the next at the Monroe County Office Building in Rochester on August 5. A fourth hearing in Westchester County will be announced soon, according to Myrie's office.

The final oversight hearing, where the committee will solicit testimony from the New York City, state, and county boards of elections along with advocates and experts, is set for September 21. The timeline makes it very unlikely they will lead to any changes to state law ahead of the general election a few weeks later, and Myrie and others have made clear they are taking the long-view.

In a statement, Senate Majority Leader Andrea Stewart-Cousins, a Yonkers Democrat, said the body would be "taking what we learn from these hearings into the next legislative session."

Jarret Berg, an election lawyer and founder of the advocacy group VoteEarlyNY, called the hearing series "a fantastic thing." "I've never in my years doing this seen an aspiration to actually host a series of statewide hearings on this topic and hear from people in their own backyards," he said in a recent interview.

The hearings follow the latest in a line of high-profile administrative blunders that have disenfranchised voters and shaken public confidence in elections. The New York City Board of Elections provoked harsh criticism this summer for releasing an erroneous preliminarily vote count that contained 135,000 test ballots. Ahead of last year's general election, the board mailed up to 100,000 ballots to the wrong absentee voters, effectively voiding those ballots and necessitating a second mailing. In 2016, hundreds of thousands of Brooklyn voters were illegally purged from the rolls. The problems aren't confined to the city; last fall, election administrators in Oneida County failed to process 2,400 voter registration forms before the razor-thin race between Claudia Tenney and Anthony Brindisi for New York's 22nd Congressional District.

The State Senate hearings also come amidst major changes to voting laws in New York. On top of ranked choice voting in New York City, the state is in its third year of early voting, which was part of a series of reforms passed when Democrats took control of the State Senate in 2019 (joining with a Democratic majority in the Assembly and a Democratic governor). It is the second year of universal absentee voting in response to the pandemic, among other changes already being implemented based on new laws. Proposed constitutional amendments to make no-excuse absentee voting permanent and to allow for “same day” voter registration (where voters can register and vote on the same day) will go before voters this fall.

Reformers are now dusting off and honing their positions on the crown jewel of New York election reform: making boards of elections more professional and less partisan. Senate leaders have hinted that the body is open to exploring those changes.

"I think it is a worthy change to discuss," Myrie said of creating a non-partisan election system, which would require a constitutional amendment approved by the Legislature and voters, and fundamental changes to boards of elections. "The current structure was born out of a reform movement to eliminate the dominance of Tammany Hall at the time and I think perhaps that sort of structure has had its time."

"I would caution folks that that is a longer process -- a years-long process," he added. "I don't think voters want to wait for that before they get a product that they deserve. So I'm anxious for us to get to work and do things that might not require such an amendment."

One intermediary step is a bill sponsored by Senator Liz Krueger, a Manhattan Democrat, and Assemblymember Nily Rozic, a Queens Democrat, aimed at professionalizing the New York City Board of Elections. It would require commissioners to meet certain professional qualifications, and make changes to funding and procurement rules. The legislation would also create a bipartisan co-executive directorship requiring approval from the mayor and other elected officials. The bill has some support among good government groups but it doesn't impact jurisdictions outside the city and advocates say improvements to it can be made before potential passage.

"I think it is a good bill," Myrie said. "I don't want to presuppose any policy recommendation before we start hearing from voters and from other stakeholders. But I think the principle of the bill, speaking to professionalization, is certainly one that I think would find wide support publicly."

Making fundamental changes to the notoriously entrenched board of elections structure is a political unknown. It will require the buy-in of Assembly Speaker Carl Heastie, former chair of the Bronx Democratic Party with strong ongoing ties to the party apparatus in the borough and beyond. Myrie sees "stiff resistance" from party leaders.

"When you are considering instances where people have gained power from their ability to staff-up boards of elections, you're challenging that power if you say we have to do something differently," Myrie said. "Ultimately everyone is going to have to come to an agreement that we can't keep doing things the same way. If that ruffles a couple of feathers, if that makes certain folks uncomfortable then so be it. The voter is who we are supposed to be in service of."

Good government groups, like the League of Women Voters of New York State  and VoteEarlyNY, also want to see adjustments to the new voting systems. The Senate has passed legislation to allow counties to establish universal early voting sites and to require some college campuses to host polling locations -- neither of which has advanced in the Assembly. Legislation to require pre-paid postage on absentee ballots has sat in committee in both chambers. The New York State John R. Lewis Voting Rights Act, named for the late civil rights leader and congressman and sponsored by Myrie, is an omnibus bill with numerous technical changes to election law. It includes the creation of a central database of information on voter behavior and pre-clearance from the state Attorney General for certain election policies.

The League of Women Voters and VoteEarlyNY are also among those pushing changes to a law, first introduced by Myrie and recently signed by Governor Andrew Cuomo, that restricts the deadline to apply for an absentee ballot. Lawmakers said the bill, which shortens the deadline by eight days, is intended to address U.S. Postal Service and BOE constraints. VoteEarlyNY has proposed a chapter amendment that would create a deadline of 11 days -- longer than the previous seven-day cut-off, but shorter than the current 15 days.

"It's a perfect example of how New York lawmakers continue to take two steps forward and one step back, watering down these reforms without a good basis for doing so," Berg wrote in an email.

"My feeling is we should be legislating during the legislative session," he added of the annual January through June window, and occasional special sessions. "I'm not a huge fan of trying to legislate after the fact."