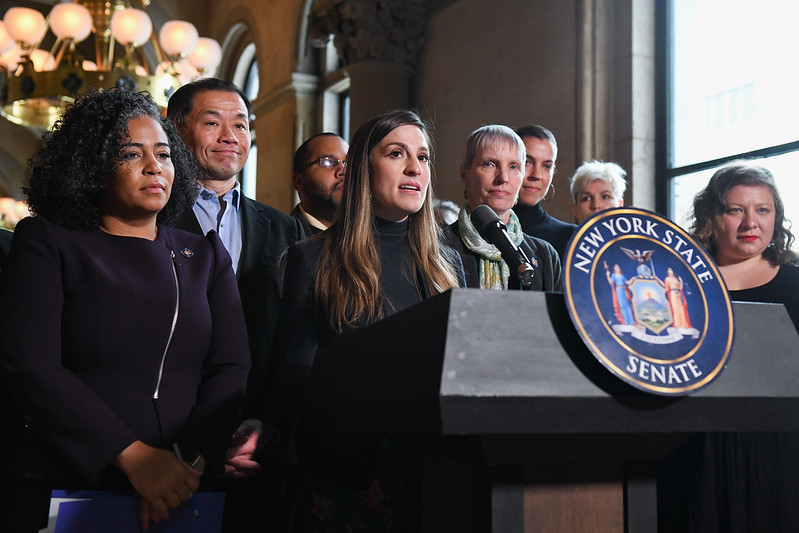 Looking over the scandal-pocked landscape of Albany in the wake of former Governor Andrew Cuomo’s resignation, lawmakers in the State Senate set their sights this week on the dysfunctional Joint Commission on Public Ethics, the state’s ethics watchdog often criticized for its apparent lack of independence and bite.

At a Senate ethics committee hearing Wednesday, senators on both sides of the aisle tore into JCOPE’s executive director, Judge Sanford Berland, over the rules and practices dictating the body’s decision-making and confidentiality, particularly surrounding an alleged 2019 illegal leak of a closed-doors vote regarding whether the agency should investigate one of Cuomo’s former top aides. On Thursday, JCOPE commissioners voted to refer that matter to New York Attorney General Letitia James for an investigation. JCOPE also sent James a criminal inquiry into whether the state inspector general's investigation into the leak was adequate or if it amounted to a 'cover up.'

"JCOPE was created to restore public trust in government, yet since it's creation there has only been rising concern about JCOPE's neutrality and ability to act as an independent body," said Senator Alessandra Biaggi, a Bronx Democrat and the ethics committee chair, at the hearing Wednesday. "After a year that has been dominated by scandals within the executive [branch] it is very clear that this moment calls for immediate change and structural reform."

"JCOPE has actually reinforced corruption over the years," said Senator Anthony Palumbo, a Republican from Suffolk County. "They have been on the fringe of some real big situations and ignored them."

JCOPE was established in 2011 by legislation introduced by Cuomo and carried by former Assembly Speaker Sheldon Silver and former Senate Majority Leader Dean Skelos, all of whom left office under a shroud of scandal. Cuomo exited this week after an attorney general's report found he sexually harassed or groped 11 women, including current and former staffers; he faces ongoing criminal investigations by multiple district attorneys and a forthcoming report from a shuttered Assembly impeachment probe. Silver and Skelos are both serving prison sentences for their misuse of government resources and abuse of the public trust. JCOPE did little, if anything, to address these cases while the men were in office. Since its creation, the body has been accused of insulating, rather than regulating, the state's most powerful officials -- especially Cuomo, who, as governor, selected six of the body's 14 members, including its chair.

Some of the most recent issues in front of the agency include JCOPE's staff granting permission to Cuomo for his $5.1 million book deal – a memoir of his governorship during the first months of the pandemic – and the lack of oversight of his reported use of state resources, including staff, to write the book.

Among the most glaring now-public examples of political interference is the alleged 2019 leak, which not only constitutes a potential misdemeanor for the leaker, but also illustrates the intertwined strings of power among Albany's leaders -- namely Cuomo and Skelos's successor, Assembly Speaker Carl Heastie -- who are meant to place checks on one another.

In 2019, former JCOPE Commissioner Julie Garcia's confidential vote on a matter related to Joseph Percoco, a high-ranking staffer of Cuomo's, and his involvement in the Buffalo Billions pay-to-play scandal, was allegedly leaked to the governor in violation of state law. The leak was referred to the state inspector general's office, another watchdog, which concluded its investigation, finding no wrongdoing, without interviewing key figures allegedly involved, including Cuomo and Assembly Speaker Carl Heastie. The speaker appointed Garcia to JCOPE and, through counsel, contacted her about Cuomo's displeasure with her vote, according to Garcia.

"The fact that [Cuomo] called the speaker just underscores the fundamental flaw with JCOPE and the one that we've always talked about," said Blair Horner, executive director of the New York Public Interest Research Group, a good government organization, at the hearing Wednesday. "The commission needs to be independent."

At the heart of JCOPE's troubles is the body's appointment structure and rules allowing a minority of commissioners to block investigations, according to lawmakers on the Senate ethics committee and good government advocates. While the stated purpose is to prevent partisan investigations, the power to dismiss complaints allows commissioners to protect their appointers -- the governor and legislative leaders -- and allies, the very people frequently at the center of investigations.

Senator Liz Krueger, a Manhattan Democrat, has proposed a state constitutional amendment that would abolish JCOPE and establish another, more independent body in its place. The amendment would replace JCOPE and a separate entity known as the Legislative Ethics Commission with a 13-member body comprised of appointees from all three branches of government. A majority of appointees would come from the chief judge and appellate division justices, who would not be subject to the body's oversight and enforcement. Enacting a constitutional amendment is a lengthy process, requiring passage in successive legislative sessions and ballot approval by voters. In the meantime, other bills have been introduced to change JCOPE's appointment structure, reduce explicitly partisan requirements, and expand transparency.

In some of her most detailed public testimony since resigning from JCOPE in the aftermath of the leak, Garcia told the Senate ethics committee the body's failures were "elementary" and "black or white."

"It, completely, is so counter intuitive or unreasonable to think that the person who actually committed the crime might be voting not to have a criminal investigation," she said of a possible JCOPE vote to refer the alleged leak to a criminal probe.

“We obviously disagree with Ms. Garcia’s statement," wrote Lee Park, a spokesperson for the inspector general's office, in a statement. "We stand by the investigation. Inspector General
[Letizia] Tagliafierro was and remains fully recused from this matter.” Tagliafierro, a former JCOPE executive director and Cuomo aide, recused herself from the investigation because of potential conflicts of interest.

In some cases, Garcia told lawmakers, matters before JCOPE would be terminated by attrition without a formal vote of commissioners. "It's not just a yes vote or a no vote. Sometimes nothing happens, it's complete gridlock...It's just in a black hole," she said. "When there's been gridlock, as far as I know nothing happens."

When asked by Biaggi if Cuomo or other state officials pressured her to resign, Garcia hesitated before declining to answer. "I'm really not able to answer that question because of conversations that went on inside executive session that I'm not able to talk about," she told the committee.

The Senate committee heard virtual testimony from ethics commissioners in Alaska and Rhode Island, which ranked first and fifth on the 2015 State Integrity Investigation, conducted by the Center for Public Integrity. Alaska's nine-member Select Committee on Legislative Ethics has four members selected by legislative leaders and five "public members" -- individuals who are not members of the legislature, elected or appointed officials subject to financial disclosure rules, party officers, candidates for office, or registered lobbyists. Those public members are selected by the chief justice of the Alaska Supreme Court and approved by two-thirds of each legislative chamber.

"You have to look at something that's a significantly more accountable system that seeks a bipartisan compromise," Alaska State Senator Tom Begich told the committee. "We do not have gridlock on our ethics committee. It does not happen and our public members are a key component of that."

In his own testimony, JCOPE executive director Sanford Berland, a former state Supreme Court judge, drew the ire of lawmakers for what they said was protecting commissioners and casting the body's problems as issues of public relations and limited resources to enforce its determinations. When asked by Suffolk County Republican Sen. Phil Boyle what changes are needed to make JCOPE "truly an ethics commission that fights malfeasance," Berland cited the body's enforcement capabilities but not potential conflicts of interest or the influence of appointing authorities, including the governor.

"I would ask that our enforcement powers and our budget for enforcement both be augmented," said Berland, who came into the director role three months ago. "We have very little fiscal capability in employing enforcement counsel and investigators." He added that while JCOPE has in-house experts in cases of sexual misconduct, it lacks the ability to hire other experts, like forensic accountants. "I wish we did," he said.

"From your opening testimony to the responses that you have given the committee members to the responses to my questions, you basically point out that the biggest problem with JCOPE is a bad PR image and that maybe its hands are tied too much by certain laws and regulations," Sen. John Liu, a Queens Democrat, told Berland.

In testimony from the public, advocates also raised questions about the state's sexual harassment and whistleblower protections, and policies allowing officials to earn income outside of their government jobs, among other issues.

"Power abuse is not just a commissioner leaking confidential information, an elected official using state resources for personal benefit, or a senior advisor rigging RFP processes for major donors," said Erica Vladimer, co-founder of the Sexual Harassment Working Group, an advocacy organization of former government staffers, in written testimony. "Power abuse is also an elected official shoving their tongue in a staffer's mouth, a chamber leader failing to hold a member accountable for sexual assault, and an elected pitting young staffers against one another, asking deeply personal and inappropriate questions, sticking his hand up a staffer's blouse."

Vladimer said sexual harassment in government workplaces could involve ethics bodies beyond JCOPE, like the inspector general, the Governor's Office of Employee Relations, the Legislative Ethics Commission, the Senate and Assembly ethics committees, and personnel divisions. She also criticized the state's Public Officer's Law, which does not explicitly prohibit "discrimination, harassment, assault, and retaliation" making it difficult to bring these types of complaints to JCOPE and other entities, Vladimir told the Senate committee. The Sexual Harassment Working Group is calling for those protections to be added.

"I do not think the Public Officer's Law, as it is currently written, does anything to protect staffers from harassment and discrimination and retaliation," Vladimer said.