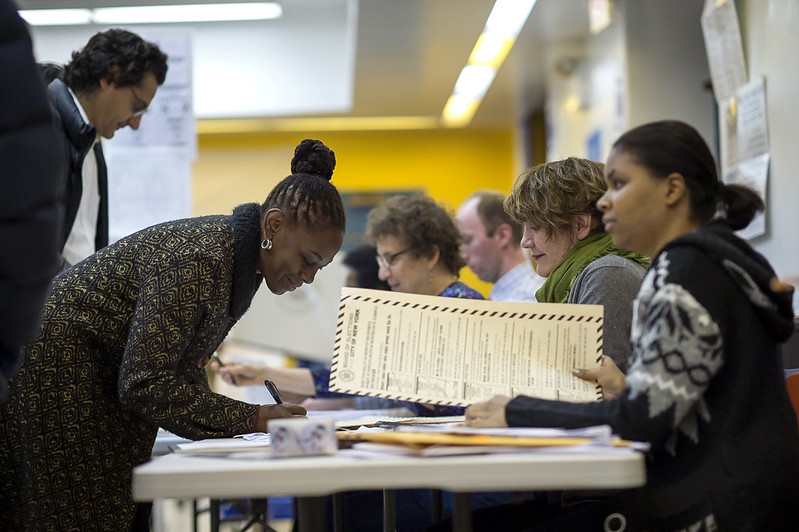 In addition to municipal elections across the state, including the consequential New York City mayor's race, all New York voters will have an opportunity to approve or disapprove five state constitutional amendments on the ballot this fall. If any of them are ratified through general election voting -- and that is likely given the state's recent history of ballot referenda -- they will be enshrined in the state's central governing document.

The questions before voters have already been drafted and passed by state legislators and deal with elections, redistricting, the environment, and the courts. The proposals include changes to the way legislative districts are drawn and seats apportioned; adding a constitutional right to clean air and water; amendments allowing same-day voter registration and no-excuse absentee voting; and an expansion of the jurisdiction of the New York City Civil Court.

To amend the state constitution, proposals must be passed by lawmakers in two successive legislative sessions and then be approved by voters in ballot referenda. Voters will see simplified versions of the potential amendments in the form of yes-or-no questions. The full text of the amendments can be found on the New York State Board of Elections website. The website notes there may be other local ballot proposals, which would be listed on the websites of county boards of elections.

Below is a brief overview of each of the five proposals that New York voters will be asked about on their fall ballots:

Proposal 1: Amending the Apportionment and Redistricting Process
The first proposal on the ballot is an omnibus amendment containing numerous technical changes to the state's redistricting process, which takes place once a decade and is unfolding now after the 2020 Census count.

Some of its key components, if approved, include permanently freezing the number of New York State Senate districts at 63; counting incarcerated individuals in their last place of residence rather than where they are incarcerated for purposes of district populations; and requiring the state to count all residents in district populations regardless of their citizenship status.

The amendment also includes changes to the approval process of legislative district lines for the House of Representatives, State Senate and State Assembly.

A 2014 state constitutional amendment created a 10-member redistricting commission, appointed by legislative leaders, which is operating for the first time starting this year and to which the current proposal makes additional changes. The commission must draw and submit district maps to the Legislature for approval after a series of public hearings. As it is currently conceived, maps require approval from seven members of the commission, including appointees from each majority and minority legislative leader, and must be passed by a legislative supermajority of two-thirds of each chamber.

The proposed amendment would continue to require the commission advance maps with affirmative votes by at least seven members, but would eliminate the requirement that they be supported by appointees of each legislative leader. It would also reduce the vote threshold from two-thirds to 60% of the 63-seat Senate and 60% of the 150-seat Assembly.

The amendment would also get rid of a requirement that the commission's co-executive directors be one Democrat and one Republican. It would also adjust some of the deadlines for submitting and approving district maps.

Good government groups have been divided on the merits of both the 2014 amendment, which passed, and the current proposal to alter it. Supporters in 2014 believed creating the commission added an element of independence and, through the public hearing process, transparency to the drawing of draft maps. But the 2014 amendment still allows the Legislature to override the commission's maps, which opponents said would leave politicians with control over the final outcomes.

Now, the groups are again divided with some noting the new proposed amendment would simplify the voting procedure and remove certain partisan elements. But others say cutting the approval threshold from 66% to 60% reduces the need for bipartisan support in the Legislature. Democrats currently hold a supermajority in both the Senate and Assembly, meaning threshold changes would not be likely to have an impact on the current redistricting process, which will culminate in the legislative session next year just ahead of the 2022 elections. But it could have implications for the process in future decades.

Proposal 2: Right to Clean Air and Water
This proposal would add to the state's Bill of Rights an explicit "right to clean air and water, and a healthful environment." The amendment would give New Yorkers additional recourse to challenge and seek restitution in the court system for polluted air and water. It may also impact the way regulators like the state Department of Environmental Conservation and city Department of Environmental Protection view their responsibilities and the regulations they promulgate.

The amendment is a longtime goal of environmental advocates and environmental justice activists but there has been some discussion of concerns about the language of the amendment and what the legal ramifications could be. The text is simple and would add only a single line to the constitution: "Each person shall have a right to clean air and water, and a healthful environment." The brevity means the implications of the right will likely be subject to interpretation in the courts.

According to Blair Horner, the executive director of the New York Public Interest Research Group, a good government organization that supports the amendment, about six states have similar rights on the books. "It's not unheard of and New York was the first state to have any sort of environmental protections baked into its constitution, really starting with the Adirondack Park," he told Gotham Gazette in a recent interview. "It harkens back to that to some extent."

Proposal 3: Same-Day Voter Registration
This amendment would eliminate the requirement that voters register to vote no later than ten days before an election or the close of polls. By doing so, there will be no constitutional block to registering to vote on the same day as voting and would open the door to state laws that could allow that.

Voting rights advocates have been seeking this reform for years, arguing it would expand access to the ballot box and increase voter engagement in what they have called an antiquated system.

"Newly naturalized voters, in particular, can finally navigate what was once an outdated and opaque voter registration process," wrote Murad Awawdeh, executive director of the New York Immigration Coalition, after the amendment passed the Legislature for the second time in May.

Unlike other recently enacted election reforms -- like early voting and changes to the party enrollment deadline or primary election calendar, which were done by concurrent passage in the state Senate and Assembly and signed by the governor -- the ten-day registration requirement is in the constitution and requires the lengthier amendment process.

Proposal 4: No-Excuse Absentee Voting
Another voting reform on the ballot would drop the constitutional requirement that absentee voters provide an "excuse" or explanation for why they cannot vote in-person. The state constitution currently allows voters to mail in ballots if they expect to be away on election day or if they have an illness or disability that would prevent them from going to a poll site.

Since the start of the pandemic, an emergency executive order signed by Governor Andrew Cuomo and a subsequent state law essentially enacted no-excuse-needed absentee voting while there is a risk of spreading COVID-19 and other transmissible diseases. This amendment, if approved, would make that permanent as part of the constitution, opening the door to continued widespread voting by mail and ballot drop-off.

Both no-excuse absentee voting and same-day voter registration were among a suite of reforms long-sought by voting rights advocates that had been blocked by Republicans who controlled the state Senate for much of the last decade. Both amendments received first passage in January 2019, shortly after Democrats gained control of the Senate and thus both houses of the Legislature and the governorship.

"No-fault absentee voting and same-day voter registration amendments are now a crucial step closer to being codified in our state constitution and delivering a more accessible franchise for generations to come," wrote Erika Lorshbough, deputy policy director at the New York Civil Liberties Union, after the amendments received second passage in May.

“Democrats are racing each other to the left to get credit for being the most progressive without stopping to think about the negative ramifications,” said Scott Reif, then a Republican spokesperson in a statement reported by the New York Times after the reforms passed in 2019. “In the meantime, hardworking New Yorkers are overtaxed and overregulated, and upstate is facing an economic emergency. It’s time to find real solutions to the economic challenges facing real people.”

This is not the first time this proposal and similar ones have been on the ballot. In 1983, an amendment increased the Civil Court's jurisdiction from $10,000 to the current $25,000 in order to keep up with inflation and to reduce a backlog of cases in the state Supreme Court. In the mid-1990s, a nearly identical amendment to the one being considered now would have increased the jurisdiction to $50,000 claims, but it failed by a narrow margin.

According to the amendment's sponsors in the Legislature, the justification is the same as it was in the 1980s: to acknowledge inflation and reduce the burden on higher courts. "Adjusting this jurisdictional limit would be one powerful tool to address these problems," reads the bill memo written by Senate sponsor Luis Sepúlveda, a Bronx Democrat. Both passages received unanimous support in both chambers of the Legislature.