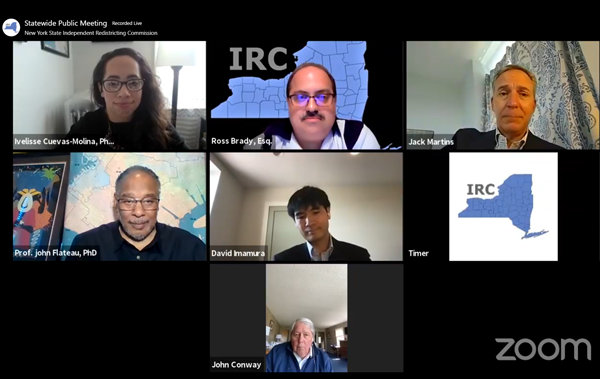 New York's legislative redistricting commission is moving into its next phase following a series of public hearings intended to get a sense of the contours of "communities of interest," a new criteria being incorporated into the line-drawing process for the first time this cycle, in addition to constitutional and statutory requirements.

The commission, itself a nascent entity, held nine public hearings in regions around the state this summer to solicit feedback from New Yorkers about what ties their communities together. Officials say the public input was key to finding the best-fit boundaries for the new units of representation for the U.S. House of Representatives, State Senate, and State Assembly, to be voted on by the State Legislature next year.

Now the commission and its map-drawers are working to release a set of draft congressional and state legislative district maps by a September 15 target date followed by another round of statewide hearings to get feedback on those boundaries next month.

"I would be the first to say that we will miss things and we want the public to weigh in and tell us that the lines should be changed to reflect this community of interest or this area or this thing we missed," said David Imamura, the chair of the 10-member Independent Redistricting Committee, in an interview with Gotham Gazette.

"New Yorkers stepped up with the first round of public hearings. We need them to step up a second time," added Imamura, a Democratic District Leader in Irvington who was appointed to the commission by State Senate Majority Leader Andrea Stewart-Cousins, a Democrat from Westchester.

The redistricting commission has been working at breakneck speed following delays in funding and the release of 2020 Census data essential to drawing maps. Data that was supposed to be released in March by the U.S. Census Bureau came out mid-August following extensions in the federal enumeration process due to the pandemic.

New York's once-a-decade map-drawing process, which in previous decades has been conducted entirely within the State Legislature, will begin with the redistricting commission thanks to a state constitutional amendment approved by voters in 2014. The commission is meant to be independent of sitting politicians, though its members were appointed by majority and minority legislative leaders and its maps are still subject to approval by state lawmakers.

If the Legislature rejects the commission's maps more than once it may redraw them. With supermajorities in both the Senate and Assembly, there is a chance Democrats will be able to unilaterally draw the final district lines.

"I have not talked to any state legislators directly about this," Imamura said.

Under the current rules, the commission must submit its final proposed maps to the Legislature by January 1, or shortly after, but no later than January 15. Early passage in the 2022 legislative session is essential for local boards of elections to be able to prepare for the spring petitioning candidates must complete in order to get on the ballot in the June primaries -- in a year where every House, State Senate, and State Assembly seat in New York is on the ballot.

An amendment before voters this November may eliminate the January 15 grace period, along with several other changes that could impact the way lines are drawn and approved. Imamura said he hopes to get maps to the Legislature by the January 1 deadline.

The commission was expected to introduce its map-drawers at a public meeting Thursday, along with what instructions they have been given, and whether or not they were partisan in nature, being hired by each of the Democratic and Republican halves of the body. That meeting was postponed after Hurricane Ida caused severe flooding and damage to much of the city and state. It will now occur on Thursday, September 9 at 4pm.

District lines must meet several criteria enshrined in state and federal law, including the federal Voting Rights Act. Districts must be contiguous and compact with relatively similar population sizes, and they cannot be drawn in a way that favors particular politicians or diminishes the vote of protected racial and linguistic groups. The proposed constitutional amendment adds additional criteria like the explicit requirement that incarcerated individuals be counted in their most recent place of residence prior to incarceration and that individuals be counted regardless of immigration status. The amendment would also freeze the number of State Senate seats at 63. There are 150 Assembly seats. New York currently has 27 seats in the U.S. House, but that number is shrinking to 26, adding further intrigue to the redistricting process.

Even with these criteria, drawing district lines is an art and has been used to diffuse and increase the political power of certain communities, racial groups, and political parties.

"Packing and cracking are classic techniques," said Jeffrey Wice, a senior fellow at New York Law School’s Census and Redistricting Institute, in an interview. "You want to make sure that you are not violating the Voting Rights Act by diluting the minority vote in circumstances where you have high levels of racially polarized voting."

"On the other hand, you don't want to pack too many minority voters into a single district where you end up wasting their vote and minimizing their influence in adjoining districts," Wice said.

In Sunset Park, Brooklyn, and surrounding neighborhoods, for example, growing Asian communities have historically been split among multiple Senate and Assembly districts. At one of the commission's public meetings in July, speakers called for Asian populations in Sunset Park, Bensonhurst, Homecrest, and Sheepshead Bay to be brought together in one district, according to a New York Law School newsletter.

With the public hearings this summer and the ones slated for the fall, commissioners are considering other characteristics that make communities cohesive.

"It does the community no good if they are split into five, six different ways and are unable to elect a representative who truly reflects their interest," Imamura said. "Communities of interest can be anything. They can be religious, they can be geographic, they can be racial."

How the commission prioritizes communities of interest will be another art and will amount to "a fine balance," according to the chair. "We have to be in compliance with federal and state law. Period. We're going to have to make a lot of decisions and sometimes that means one community of interest won't necessarily trump another," Imamura told Gotham Gazette -- another reason why the second round of input from New Yorkers will be so important, he said.

New York State is slated to lose the congressional seat after the most recent Census count showed that while the population in the New York City metropolitan area grew significantly, the Upstate population declined and several other states saw their populations grow enough for New York to lose in its relative standing again. One of the key questions before the commission is where the lost seat will come from.

"I think that my colleagues and I are going to have a spirited debate on this," Imamura said. "There are a lot of different factors that are weighed in determining the movements of districts or the elimination of districts so we'll see where the commission goes."

Governor Kathy Hochul has indicated she will use her power as governor to help Democrats grow their slim majority in Congress, aided by Democratic gains in New York. "Yes," she said in a New York Times interview, when asked if she would try to use the redistricting process to do so. "I am also the leader of the New York State Democratic Party. I embrace that."

Some state senators in New York City told The City that they may also use their power in the Legislature to protect the district lines that brought them to power.

New York State Senate districts, more so than Assembly districts, are notoriously gerrymandered and disconfigured, designed to help keep Republicans in power during the last redistricting, a decade ago, in a deal with Democrats who got to draw their own Assembly lines.

In an interview Thursday, Senator Zellnor Myrie, a Democrat who represents a gerrymandered district that cuts from central Brooklyn to Sunset Park, said any position was "premature" without seeing the commission's proposed maps. "The process is meant to include the public and those who would be impacted and I look forward to seeing what the commission comes up with," he told Gotham Gazette, adding, "the goal is to keep like communities together."

"The people should be picking the politicians, not the other way around," he said.