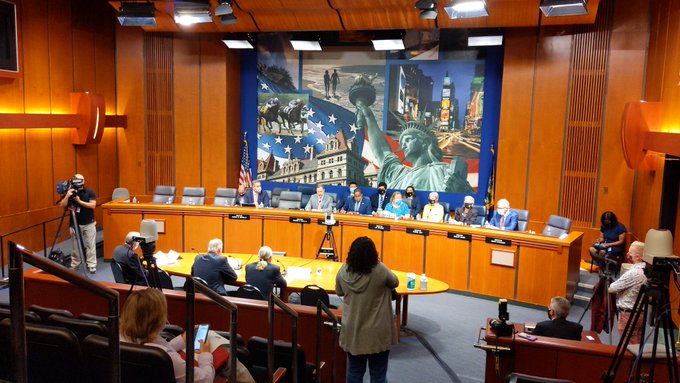 The State Senate analyzed the execution of the June primary elections in a major hearing Tuesday that included testimony from election administrators for New York City and State, as well as counties, and election reform experts. The lawmakers not only examined how elections were run, but the systems and structures that undergirded their performance -- and, as many said, enabled their failures.

Tuesday's event was unusual in that it served as the culmination of a series of public hearings held around the state this summer by the Senate elections committee, which gathered feedback on the voting experience from average voters. Those hearings highlighted and exposed a number of problems that lawmakers hoped to address Tuesday and in subsequent legislation, according to committee chair Zellnor Myrie.

"Most New Yorkers vote without incident and most board of elections employees work in good faith, work tirelessly, and work to administer a clean and helpful election," said Myrie, a Brooklyn Democrat in his third year in office. "But if I told you that most of the levers on an elevator were sound...or that most of the controls on a train were working you'd say, 'thank you,' and find another mode of transport."

Despite (or perhaps shored up by) the summer tour, Tuesday's hearing focused on topics advocates have been raising for years and, in some cases decades. They include the Board of Elections' structure, widely seen as enabling inaction and diffusing accountability. The senators and election administrators also discussed the slew of voting changes made in recent years and a growing push to "professionalize" the boards of elections.

New York City, which contains roughly 40% of the state's registered voters and is known to have especially troubled election administration, was a big focus. Topics of interest included the new ranked-choice voting system, poll site staffing and locations, and the age-old problem of long lines at the polls. The city Board of Elections representatives who testified defended their agency and complained about the criticism they frequently receive.

There was also a concerted push by good government advocates for the New York City Council, which is responsible for confirming commissioners of the city BOE, to take a more active role in vetting and shedding light on the commissioners. (The Council is expected to vote through a new Democratic Manhattan commissioner on Thursday with little public vetting of the nominee put forward by the county party.)

Boards of Elections’ Bipartisan Structure
Good government groups and many elections experts have for years said the bipartisan structure of elections boards, in which commissioners are chosen evenly from the two major parties, is anachronistic and convoluted.

A progressive era reform, in place since the turn of the last century, the partisan split was intended to place checks on the parties, so that no single one controlled the levers of voting. Elections advocates largely agree that the split now diminishes an emphasis on expertise and professionalism.

"Not even basic management skills are necessary criteria for selection or retention as a commissioner, much less familiarity with election administration," said Susan Lerner, executive director of Common Cause New York, in testimony submitted to the committee.

The bipartisan divide also leads to gridlock, which can cripple elections with inefficiency -- wasted time and tax dollars that could go toward election preparation. "The fact that there are an even number of commissioners, split between Democrats and Republicans is a further complicating factor, as the lawsuit filed in 2020 by 3 Democratic Election Commissioners against their own Boards to effect a desperately needed extension of early voting hours illustrates," Lerner said.

"This Tammany Hall era arrangement is not in step with the needs of voters today," wrote good government group Citizens Union, in testimony. Instead, the group is calling on legislators to pass an amendment to replace the Board of Elections system with an elected Secretary of State with limitations on their future participation in politics.

Election administrators from the State Board of Elections and county boards defended the make-up, which they said helps ensure faith in the outcomes. "Our bipartisan system delivers a result that is believed on all sides because there are representatives from the two major parties involved in every decision that we make," said Dustin Czarny, a Democratic commissioner from Onondaga County.

Peter Kosinski, the Republican co-chair of the State Board, loosely compared the "checks and balance" of the bipartisan structure to the separation of powers in the American republic, calling it "a basic tenet of our government and it is reflected in our boards of elections."

Douglas Kellner, the Democratic co-chair, supported the bipartisan structure but said New York City's model of ten commissioners (two per borough) -- as opposed to the typical two in most county boards -- was unwieldy and should be changed. "I strongly urge that the time has come to abolish the ten-commissioner model that separates New York City from the rest of the state and go to the model of two commissioners who work full-time and who have full responsibility and accountability for the operation of the agencies," Kellner said.

Patronage and Professionalization
Many have criticized the partisan structure for the boards' lack of professionalism, which leads to blunders like misinformation from poll workers and chaotic poll sites.

"At the city board the problem is that the senior management positions are not necessarily chosen on the basis of professionalism because of the need to provide patronage to each of the borough parties," said Kellner. "That's one place where changing the structure of the board would make a big difference."

But he said that same patronage helps ensure well-run elections at the poll-site level, where administrators interact with voters.

Kosinski defended the competency of election workers throughout the state. But the sheer quantity of election hires needed each year to run elections makes training workers difficult, he said.

"We hire tens of thousands of people every year to help with the election process," he said. "Is it difficult to train those people and to find those people? Yes it is, that's just a fact because of the number of people that you have to bring in on any election day."

Michael Ryan, the executive director of the New York City Board of Elections, said most employees begin as poll workers and "graduate up." Less than 40% of poll workers are referred through the Democratic and Republican parties, he told the committee.

But that doesn't mean they have professional qualifications. Most are "regular neighbors and friends and maybe they get involved in the political process afterwards," he said, adding: "outside of technical jobs and a few other positions we don't do job postings but I think that's the normal way things get done in a lot of the government processes."

Ryan blamed one of the most high profile snafus of the primaries -- the inaccurate reporting of preliminary ranked-choice voting data -- on a lack of protocols for releasing vote data between the typical "unofficial election night results" and the certification of vote totals.

Had they avoided releasing preliminary ranked-choice tabulations, Ryan said, "I can unequivocally say that never would have happened because prior to certification the borough chiefs and deputies have to complete a discrepancy report."

"We're going to have to circle back amongst ourselves and the commissioners to determine whether or not it makes sense to do any preliminary release of data before the certification and if it does make sense...then we have to develop a set of protocols similar to the protocols that we engage in for certification," he added.

A bill in committee in the state Legislature, sponsored by Senator Liz Krueger, a Manhattan Democrat, and Assembly Member Nily Rozic, a Queens Democrat, would require New York City elections commissioners to have certain professional qualifications. It would create co-executive directors and delineate their powers and that of the commissioners, among other provisions. While conceptually in line with the widely supported spirit of professionalization, good government groups have not universally supported the legislation.

City Council Involvement
While Ryan and Deputy Executive Director Dawn Sandow faced the Senate committee's questions -- along with commissioners from the State and several county boards -- the commissioners of the city Board of Elections did not. In fact, they are almost never to be found at oversight hearings conducted by the State Legislature or New York City Council.

On Tuesday, a coalition of good government groups issued a letter to Council Speaker Corey Johnson, Majority Leader Laurie Cumbo, and Council Member Karen Koslowitz, the chair of the committee on Rules, Privileges, and Elections, calling on them to "hold a public confirmation hearing" for Jenny Low, who was recently nominated to the BOE by the Manhattan Democratic and "vet the nominee’s experience and fitness to administer elections."

"Low’s experience could be relevant, but the Council must make a real effort to inspect her qualifications and whether she is suitable for the position," wrote the groups, including Citizens Union, Common Cause, the New York Public Interest Research Group, and Reinvent Albany. The letter called for transparency in the confirmation process, including making votes public, and publishing Low's resume. The groups also called for the Council to ask Low to commit to certain reforms like "allowing the Board’s Executive Director to unilaterally hire and fire employees, and publicly posting all open job positions," as it has done in previous confirmations.

Public Advocate Jumaane Williams made a similar push in his testimony before the Senate committee Tuesday: "Our Office is encouraging the incoming New York City Council to exercise more discretion when voting on BOE appointees to ensure that staffing is of the highest possible quality," he wrote.