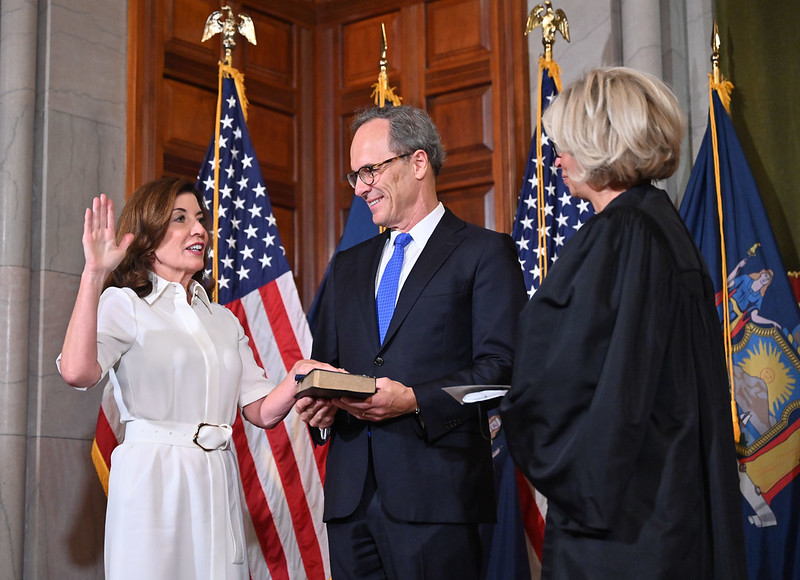 Governor Hochul with her husband (photo: Kevin P. Coughlin/Office of the Governor)

UPDATE: The day after this article was published by Gotham Gazette (headlined "Hochul Pledges to Release 'Ironclad' Conflicts of Interest Policy"), Governor Hochul released the recusal policies she, Secretary to the Governor Karen P. Keogh, and Lieutenant Governor Brian Benjamin signed related to their private business interests. For Hochul and Keogh the recusals involved the work of their husbands at Delaware North and Bolton-St. Johns, respectively. Benjamin's policy involves recusal in certain matters related to NextPoint Acquisition, an investment firm he founded and directed and in which he still owns stock, and to his spouse's position at New York State Homes and Community Renewal, a state agency. The release was part of a larger announcement of new government transparency measures that included plans to improve agency information sharing, Freedom of Information Law compliance, and an executive order requiring in-person ethics training for state employees.

Before taking the state’s highest office, then-Lieutenant Governor Kathy Hochul promised to take big strides away from the corruption and impropriety that have characterized Albany politics for decades. ​​Among her commitments was to craft policies to prevent conflicts of interest related to the business dealings of her husband, a senior executive at an international gaming company, and the spouses of other high-ranking executive branch officials, especially Secretary to the Governor Karen Persichilli Keogh.

More than two months into her tenure as governor, no policy has been made public and government watchdogs continue to question what guardrails are in place during ongoing state decision-making.

In answering some of the persistent questions around whether a conflicts-of-interest policy exists and what it entails, Hochul’s administration is offering new details and a promise that the policy will be released publicly.

“Governor Hochul is committed to restoring trust in government, and she holds herself and her staff to the highest ethical standards," Avi Small, the governor's spokesperson, told Gotham Gazette. "Before the Hochul Administration began, the Governor and Secretary signed recusals to prevent even the appearance of conflicts of interest. We have been consulting with legal experts on these policies, and we are planning to release them publicly.”

Small said the policies include Hochul's recusal from matters that have an explicit impact on Delaware North and a commitment to abstain from using her office to benefit the company. Similarly, any state business related to the work of Keogh's husband, an influential New York lobbyist, is being delegated to other executive staff, Small said.

Hochul's husband, William Hochul, Jr., is a senior vice president and general counsel at Delaware North, an international concessions and entertainment company with stakes in numerous state contracts and decisions. It has a notable interest in a potential $1.4 billion deal to create a new stadium for the Buffalo Bills, which could involve generous state subsidies -- and which Hochul has said she is committed to seeing through.

Meanwhile, Mike Keogh is a partner at Bolton St.-Johns, a powerful Albany lobbying firm whose work touches a wide variety of issues and decisions.

In an August 11 interview, soon after scandal-mired Governor Andrew Cuomo announced his intention to resign, Hochul told the Buffalo News her husband "will continue to recuse himself from anything to do with state government​​." She said nothing of her own recusal in state negotiations. A few days later, and a week before her August 24 swearing-in as governor, she committed to working with outside experts to develop an "ironclad policy."

"I understand concerns and I have reached out to outside ethics experts to come up with an ironclad policy so no one will ever question that there's any involvement with my husband and anything pertaining to the state of New York," she said in an August 15 interview on CNN when asked about potential conflicts with Delaware North.

Good government advocates and other concerned parties say the governor should make her policy public and have it independently verified, either by the state Attorney General and Comptroller, or by the Joint Commission on Public Ethics (JCOPE), the state's ethics oversight body.

"It's never going to be perfect but having an independent eye on it from the Comptroller or the AG or both," said John Kaehny, executive director of Reinvent Albany, a government transparency advocacy group, "that would lend tremendously to the credibility, because otherwise it's just her or Delaware North saying, 'Trust us.'"

"That's policing yourself and policing yourself doesn't work so well," he added. Kaehny said there should also be a plan in place for the Hochul administration to regularly update those entities on the policy's implementation.

"Internal guidance, though helpful, isn't enough," said Blair Horner, executive director of the good government group NYPIRG. "The governor should request a formal opinion from JCOPE and then she should release that decision to the public."

In an editorial published Tuesday, the Albany Times Union editorial board took the same position. "She owes it to New Yorkers to get a credible second opinion, and to share it with the public," the board wrote, later adding, "It would give members of the public a chance to judge for themselves whether the finding and constraints are appropriate."

"We think the Comptroller or AG would be more credible than JCOPE as that second opinion," Kaehny said, an apparent reference to criticisms that the commission lacks independence and bite (Hochul and some legislators have said it is in need of a major overhaul). "That said, a public, unredacted JCOPE advisory opinion that clearly addressed public concerns about conflict of interest would be a heck of a lot better than nothing."

Family ties are a tradition in the State Capitol: Melissa DeRosa, Secretary to former Governor Andrew Cuomo, is the daughter of Bolton St.-Johns' chief Albany lobbyist, Giorgio DeRosa. When the younger DeRosa was appointed to the influential post in 2017 government watchdogs raised alarms about the potential conflicts her relations posed. Cuomo dismissed them. "Her father is a longtime, well-known lobbyist in Albany. Everybody knows that. So, I don’t see the issue whatsoever," he said at the time. DeRosa has said she complies with recusal rules of the state's Public Officers Law and consulted with JCOPE to avoid the appearance of conflicts.

New York's Public Officers Law does not explicitly mention conflicts of interest related to family members but does bar officials from having "any interest, financial or otherwise, direct or indirect," or "engag[ing] in any business or transaction or professional activity or incur[ring] any obligation of any nature" that would conflict with their official duties.

JCOPE generally recommends officials "recuse yourself from any personnel decisions that involve a family member or close personal friend." It is unclear what direct guidance DeRosa received from JCOPE because the body's advisory opinions do not contain identifying information. It is also unknown in what instances DeRosa recused herself, an especially complicated task in a state government where issues are often intertwined in large package deals during budget and end-of-session negotiations.