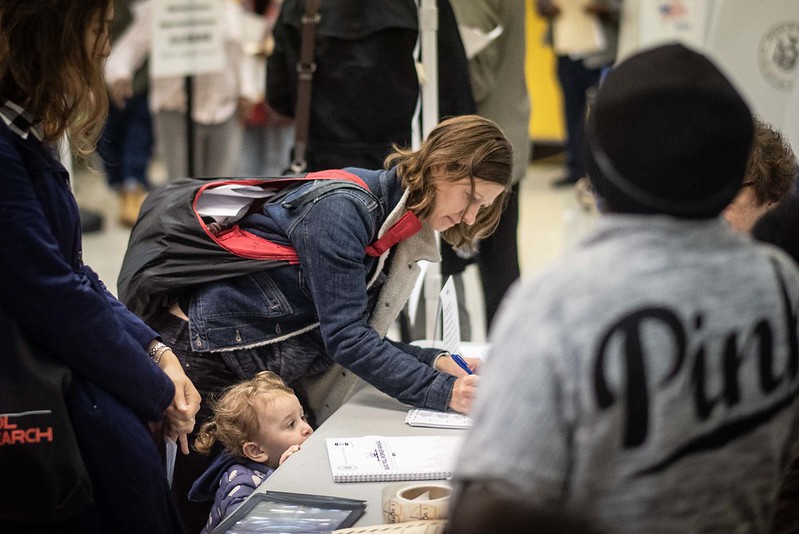 With more than 100,000 absentee ballots yet to be counted, New York voters thus far appear to have approved two state constitutional amendments on the general election ballot and voted down three others. It is unlikely that the mail-in ballots will be enough to sway some or all of the outcomes, setting the stage for only two of the five ballot referendums to pass, though it is not impossible.

The statewide results lend traction to environmental advocates but deliver a major blow to election reformers seeking to continue the momentum of the last three years. They also settle the latest contentious chapter of the state's legislative redistricting reforms, which divided good government groups and elected officials this year -- just as they did in 2014 when another referendum made major changes to the state constitution.

Yorkers will now have a constitutional right "to clean air and water, and a healthful environment," something only a handful of other states have. The proposal, which was Question 2 on the ballot, received roughly 61% of the statewide in-person vote, according to the State Board of Elections' unofficial results.

A second successful amendment, what was Question 5, will broaden the jurisdiction of the New York City Civil Court, allowing claims to keep up with inflation and for cases to be more evenly distributed among the courts. It garnered about 54% of in-person votes from early voting and Election Day.

But the measures to allow for same-day voter registration and no-excuse absentee voting both appear to have failed. As does the amendment containing new rules for the decennial drawing of state legislative and Congressional district lines, which will be finalized by Albany lawmakers next year. It would have made changes related to population apportionment, including how prisoners and undocumented immigrants are counted, the size of the State Senate, and how district lines get approved.

"Tonight's results should remind us all not to take pro-democracy victories for granted," said Theo Oshiro, executive director of Make the Road New York, on election night. Ochiro was part of a coalition that supported the voting and redistricting amendments. He blamed a "a fear-mongering campaign from Trump conservatives" and the amendments' supporters who "remained complacent and did not invest the energy and resources needed to correct the record and win."

"The failure of props 1, 3, and 4 is a black eye for democracy," said Susan Lerner, executive director of Common Cause New York, another member of the coalition.

Just above half of all voters counted by the end of election night voted "No" on the elections amendments. For the redistricting proposal, 48.5% of voters were opposed and only 38.4% were for it.

In New York City, those dynamics were flipped with all ballot proposals receiving at least 58% of the vote, according to the City Board of Elections' unofficial results.

The unofficial results do not include many absentee and affidavit ballots, which have yet to be counted.

Each of the five proposed amendments were passed by the Democratic-controlled State Legislature twice in successive legislative sessions before going to voters. In most cases, they represented years of advocacy within and outside of government. But Democrats did little to push for voter approval of all the measures while Republicans pushed hard in opposition to all of them, especially those related to redistricting and voting, Questions 1, 3, and 4.

"For the party itself this was not something that we were taking as a priority," said State Democratic Party Chair Jay Jacobs in an interview on Capital Pressroom Thursday. "That might have been something where we should have paid more attention."

"I think there was an assumption they were gonna pass," he said.

The newly enshrined right to clean air and water for all New Yorkers could have significant implications for government and a number of industries, whose actors may be more liable for the pollution they spew. Still uncertain is how courts will view the new right, laying the groundwork for its impact to be contoured by case law.

The narrowest amendment on the ballot expanded the New York City Civil Court's jurisdiction to include claims of up to $50,000, up from a previous limit of $25,000. It will apply only to New York City. The justification was simple: to keep up with inflation (the limit was similarly raised in 1983 from $10,000 to $25,000) and to reduce the backlog of civil cases in the State Supreme Court. A nearly identical referendum went before voters in the 1990s but failed.

The election night results constituted a mixed victory for the State Republican Party, which opposed each measure -- particularly the redistricting amendment, which would have done away with a number of tools used by Republicans for decades to control the line-drawing process and pack the State Senate with members of their party. Those machinations, often reached via deals with Democrats under a split government, will still become the province of Democrats now in power to craft district lines to their liking.

The amendment would have made numerous changes to the process, ranging from the substantial to the technical. It would have frozen the number of State Senate seats at 63, the current level. And it would have required map-makers to count jailed New Yorkers as residents of their hometowns, as opposed to prison towns. It would also have required that all residents be counted, regardless of citizenship status.

In many of the redistricting processes over the last 100 years, Republicans have used an allowance in the State Constitution to add seats to the State Senate in areas likely to vote Republican (often after horse-trading with Democrats, who got their own advantages).

The GOP has also benefited from counting incarcerated individuals in the places they are imprisoned, rather than where they hail from, boosting populations in more conservative districts upstate. Both practices have helped Republicans control the State Senate for most of the last century. They were both targeted by Democrats once they took the Senate in 2019, matching a long-time majority in the Assembly (also bolstered by generous line-drawing) and were presented on the chopping block for voters this fall.

The amendment would also have made changes to how district lines are approved, first by the new state redistricting commission (itself established in a highly debated referendum in 2014) and finally by the State Legislature. It would eliminate certain partisan voting requirements of the commission, which must draw and pass proposed maps before advancing them to the Legislature, and adjust some of the deadlines for doing so to keep up with recent changes to the primary election calendar. It also lowered the necessary final vote threshold needed to pass new district maps in the State Legislature from a two-thirds supermajority to an easier 60% of each house.

Some good government groups, like NYPIRG and Common Cause New York, supported the new amendment, saying it helps fine-tune parts of the 2014 amendment (both opposed that referendum when it was on the ballot). Other groups, like Citizens Union and the League of Women Voters, opposed the new changes because they make it possible for lawmakers to draw lines with less cooperation across the aisle (they both supported the 2014 referendum).

The voting changes were relatively simple, if controversial. One would have eliminated a constitutional deadline to register to vote 10 days before polls close, making it possible for New Yorkers to register to vote and cast a ballot up to and on any election day.

The other would have made absentee ballots available to all voters in all elections, regardless of the circumstances by eliminated the need to provide a justification for requesting one. But that, for the time being remains the status quo: since the onset of the pandemic, the risk of spreading the coronavirus -- something that applies to all voters -- has been considered a valid reason.