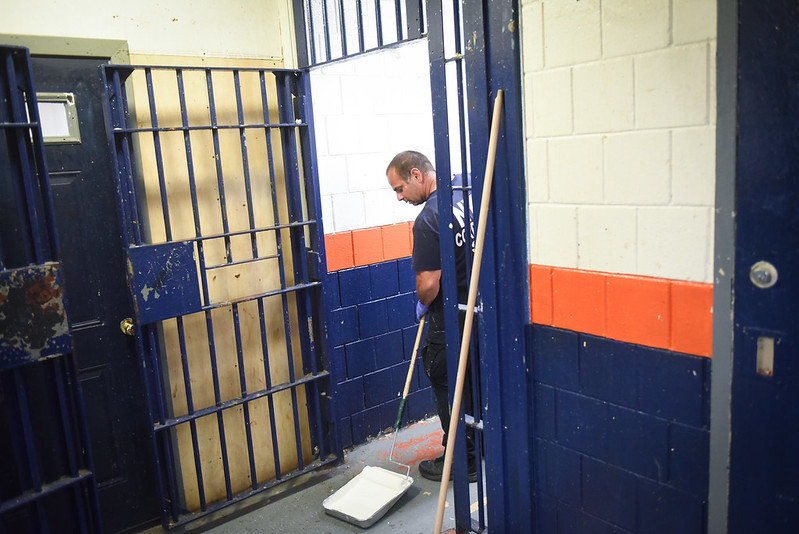 The deaths this year of 14 people held on Rikers Island and recent reports of inhumane conditions have renewed attention on the dereliction of one of the country's largest municipal jail systems.

That includes from the lead sponsor of a bill in the state Legislature that would create an oversight board and statewide ombudsperson with jurisdiction over local jails and state prisons. The bill's author, Assembly Member Daniel O'Donnell, says he is pushing for its passage in the next legislative session, which begins in January, arguing it would add needed transparency to a vast system with restricted public access.

"You have people both at Rikers and in prisons who are not getting the things that they need to be safe," said O'Donnell, a Manhattan Democrat, in an interview with Gotham Gazette. "If that's the case somebody needs to look at: is that an accident, is it intentional, is it a systematic problem -- and that's part of what the job of the ombudsman would be."

The legislation would establish a "correctional ombudsman" and a new Correctional Oversight Board separate from state and local correction departments with access to all prison and jail documents and the power to conduct investigations. While the new office would not be empowered to enforce its findings, it would be able to refer them to local prosecutors and the state Attorney General.

O'Donnell, a former chair of the Assembly correction committee, believes the state's current prison oversight system is flawed because of conflicts of interest and the State Department of Corrections and Community Supervision's restrictive approach to information. The department's remediation system is either housed internally or in the New York State Commission of Correction, a body of three members, all former correction and law enforcement officials.

"Allowing employees to judge other employees is not a good recipe for success," O'Donnell said  of a provision barring former DOCCS employees of the last 10 years from becoming the ombudsperson.

The New York City Board of Correction oversees the city's correction department with nine members appointed by the mayor, six upon the recommendation of the City Council and State Supreme Court. During the pandemic, the board has suffered from budget cuts and restrictions on its typical investigative functions. It has also been accused of lacking independence from de Blasio, who also controls the DOC, having issued no violations since the pandemic began. Along with the ability to make recommendations to the Board of Correction, the City Council also has oversight of the city’s jails and some power to legislate.

In 2015, Rikers Island came under the oversight of a federal monitor as part of a settlement with the Department of Justice and advocates over brutality and rampant civil rights abuses in the complex. The dysfunctional jail complex became a target of activists and elected officials, particularly former Council Speaker Melissa Mark-Viverito. After eventual buy-in from de Blasio, it is now slated for closure and replacement by 2027.

Another organization, the Correctional Association of New York, is a storied nonprofit with the unique statutory authority to monitor and report on state prisons and has been doing so for 175 years.

Anthony Dixon, director of community engagement at the Parole Preparation Project, believes the state would be better served by empowering the Correctional Association than creating a new body. "Why do something like that when you got a mechanism that is there, that's been there...but they just never had the teeth," Dixon, a formerly incarcerated Brooklynite, told Gotham Gazette.

"By all means more oversight," said Jennifer Scaife, executive director of the Correctional Association, "and I would offer as a consideration that further empowering existing forms of oversight might be a strategy that legislators could consider in lieu of establishing yet another form of oversight at significant cost to taxpayers and questionable independence from the executive."

Scaife argued “the Correctional Association is well-positioned to be further empowered to provide that kind of oversight.”

Another bill sponsored by State Senator Luis Sepúlveda, who also carried O'Donnell's bill, would have given the Correctional Association much of the authority of the proposed ombudsman, like unfettered access to DOCCS records, including surveillance footage, and the right to unannounced site inspections of any state prison. The State Legislature passed it in 2020 but, according to Scaife, then-Governor Andrew Cuomo stripped it of those key provisions before signing it in December.

"Granted, we were in a different administration, so it could be that the climate is more favorable to passing something like this," she said, noting no draft legislation has yet been introduced.

Victor Pate, a statewide organizer with the HALT Solitary campaign, said O'Donnell's bill was a good idea "theoretically," but he had reservations. "It's not effective until you have people that have been directly impacted through the system of incarceration that is a part of these particular boards and oversight committees."

At least ten other states have some form of correctional ombudsperson, according to Assembly Speaker Carl Heastie's office in 2016, as do Canada and parts of the United Kingdom. O'Donnell's proposed Correctional Oversight Board would have 12 members all appointed by the governor: one would be the state Inspector General; four would be appointed from recommendations from the Assembly and Senate; two others from a recommendations by prison advocacy non-profits; and the others would be a formerly incarcerated person, a former state prison employee, an attorney recommended by the state bar association, a medical professional, and a mental health professional.

The board would hire the ombudsperson who, in addition to having full access to state and local correctional records, could make unannounced site visits to facilities with their staff of investigators.

O'Donnell first introduced the legislation in 2016 following a prison break from Clinton Correctional Facility near the Canadian border. The escape -- through a tunnel dug with the help of prison guards -- led to a multimillion-dollar manhunt and the death of Richard Matt, one of the escapees. The bill passed just weeks after the federal monitor released its first report on Rikers Island, detailing some progress but continuing problems like guards' excessive use of force.

The State Assembly, with a Democratic majority, passed the bill that same year but it failed in the Republican-controlled Senate. The bill has not passed either house since Democrats took control of both chambers in 2019.

"Independent oversight has been sorely lacking in the state's correction system for far too long," Heastie said when the legislation passed in 2016. "The Office of the Correctional Ombudsman, which would be separate from DOCCS, will allow for impartial investigations that will get to the bottom of such troubling allegations of retaliation against prisoners, violent assaults and inmates being denied medical attention so we can take corrective actions that will ensure the safe, just and effective operation of the state's correctional facilities."

Heastie's office did not respond to a request for comment for this story on the bill or its chances in the next legislative session.

O'Donnell said he has not yet spoken with the Hochul administration about the bill but believes public pressure to change the state's correctional system will be enough to bring it to the finish line next year.

"I think it's going to happen because its time has come," he said. "When there are weekly stories and discussion about the conditions and the failure of oversight, the solution is to change oversight, right?

The New York State Correctional Officers and Police Benevolent Association representing 18,000 corrections officers did not comment on the legislation despite requests from Gotham Gazette.

In October, Governor Hochul and Mayor Blasio announced the emergency transfer of 350 individuals from Rikers custody to state prisons to alleviate some of the burden on the city's facilities and spare people incarcerated from abuse and neglect at the hands of the city Department of Correction (DOC). Hochul also signed the Less is More Act, aimed at preventing recently paroled people from being sent back to prison for technical violations.

On Monday, Hochul announced the closure of six state prisons by March due to dropping inmate populations. The maneuver is expected to save the state $142 million and entail the transfer of hundreds of incarcerated individuals.

With a $2.5 billion budget, DOCCS has 50 facilities housing about 31,500 incarcerated individuals around the state. While the population has decreased by more than half over the past two decades, violence against staff and detainees remains a serious issue. In the first ten months of 2021, there were roughly 900 reported assaults on staff and another 900 on people in prison, according to DOCCS records.

In the previous fiscal year (July 2020 to June 2021), the New York City Department of Correction reported an average daily population of just under 5,000, less than half of what it was when de Blasio took office in 2014. But in recent weeks, reports of chaos in the wake of the pandemic, increasing arrests, and staffing shortages have left detainees and jailers at risk.

In August, the federal monitor issued a report detailing sinking conditions on RIkers Island prompting a series of visits by City Council members and state legislators who expressed horror at what they saw. In response, de Blasio issued an emergency plan to address concerns. But, in September, a group of New York's Congressional Democrats issued a letter calling on the Biden administration to intervene. A short time later de Blasio indicated he would visit the complex. his first time since 2017, but did not speak with any incarcerated individuals or rank-and-file guards when he did.

While New York's jails and prisons have been plagued by violence, decay, and opacity for decades, O'Donnell believes the current crisis on Rikers will be a tipping point in the public debate.

"I would rather go to Attica than go to Rikers Island. OK? Does that tell you something?" he said.