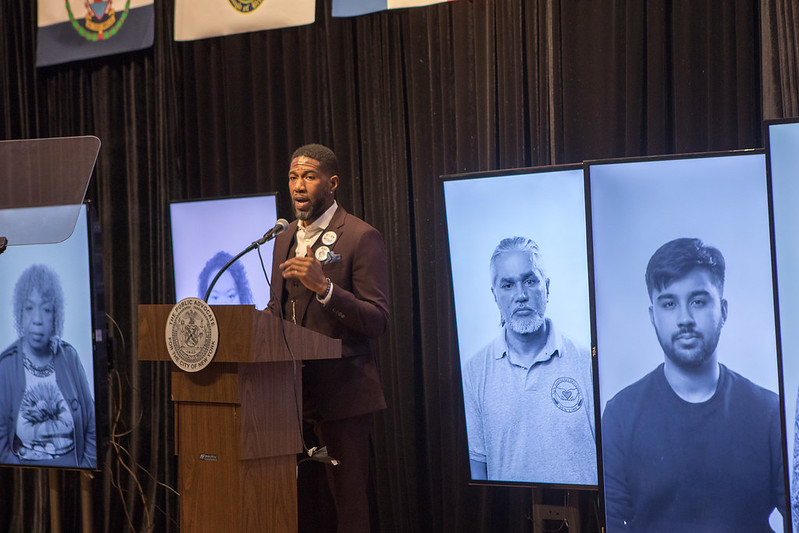 With more than 23,000 members across the state, Make the Road is New York’s largest member group of immigrant advocates and its political arm is putting its heft behind Jumaane Williams’ bid for governor this year.

The endorsement from Make the Road Action is the latest in a recent series of progressive support announced for Williams, along with other groups and elected officials such as New York Communities for Change, New York Progressive Action Network, and City Council Members Alexa Avilés, Tiffany Cabán, Jennifer Gutiérrez, Lincoln Restler, Julie Won, and Sandy Nurse.

Williams, the New York City Public Advocate and a Brooklyn Democrat, is running in the June gubernatorial primary against Governor Kathy Hochul and U.S. Rep. Tom Suozzi, who represents much of Nassau County and part of Queens. Two other Democrats, Attorney General Letitia James and former New York City Mayor Bill de Blasio, had both explored bids but have since dropped out or decided not to run, leaving Williams as the progressive candidate in the race against his two more centrist opponents.

With his history of activism and progressive bonafides, Williams was the unanimous choice for Make the Road Action, which previously endorsed Williams’ bid for reelection last year and his unsuccessful campaign for lieutenant governor in 2018. In that latter campaign, Williams lost to Hochul as she sought reelection alongside then-Governor Andrew Cuomo. The endorsement process, which involved an issue questionnaire and interviews with the candidates, came down to Williams and Suozzi; Hochul did not participate.

“We need a Governor who is going to stand up to ensure tenant protections and keep community members in their homes, fully and permanently fund excluded workers, and make sure all New Yorkers have access to healthcare,” said Theo Oshiro, co-executive director of Make the Road Action, in a statement accompanying the endorsement. “Jumaane Williams is deeply committed to all of these issues, and he has the track record as Public Advocate, Council Member, and community organizer to prove it.”

Williams has been aligned with Make the Road Action’s priorities for years, and has pushed with it and other allies for a variety of progressive policies, many of which have come to fruition in recent years with Democrats in full control of the New York City and State governments. Those have included police reform, making New York City a “sanctuary city,” driver’s licenses for undocumented immigrants, the New York Dream Act, the $2.1 billion Excluded Workers Fund enacted last year, and more.

Currently, Make the Road Action is pushing for a slate of bills and budgetary measures, all of which Williams supports, at the state level that will aid immigrant New Yorkers and working people of color. “I’m proud to once again have the support of Make the Road Action, an organization I've long worked with to bring justice and equity to our city and state for immigrants, working families and tenants alike,” Williams said in a statement. “As we work to rebuild and renew New York from the ongoing pandemic, we can't go back to normal because normal didn't work for most folks. As Governor, I'll look forward to continuing to partner with Make the Road Action's broad based coalition to bring transformational change to our state."

One of Make the Road Action’s top priorities is getting a $3 billion infusion for the state’s Excluded Workers Fund, which was created during the pandemic to provide aid those who didn’t qualify for federal relief, mostly undocumented immigrants. The $2.1 billion fund has been depleted and Governor Hochul has not proposed additional funds for it in her executive budget for the next fiscal year that starts April 1.

“Immigrant workers were on the frontlines of the pandemic and won a historic victory to fund excluded workers. But the Excluded Workers Fund was supposed to reach all excluded workers, and now it’s run out,” said Olga Vásque, a Make the Road Action member from Westchester, in a statement. “Jumaane Williams understands that excluded workers need an additional $3 billion in funding and a permanent solution. He also knows that too many of us remain at risk of being displaced from our homes and excluded from health coverage because of our immigration status, and stands with us for Good Cause and Coverage for All. He understands what life is like in our communities, and I’m thrilled to encourage my neighbors to vote for him.”

The passage of the “good cause” eviction legislation is a top priority for Williams and Make the Road Action, among other progressives, and has been gaining momentum in the state Legislature. It would give tenants the right to automatic lease renewals, among other things. Proponents of the bill say it has become particularly urgent since the state’s eviction moratorium expired on January 15 and after the state’s $2.2 billion pandemic-era Emergency Rent Assistance Program ran out of funds. Hochul has not included any additional funds for the ERAP in her budget either but has set aside $2 billion for pandemic relief that could be used in part for that purpose upon negotiations with the Legislature. She has also repeatedly asked the federal government for significantly more in rent relief funding, including a request issued Wednesday for $1.6 billion for 174,000 unfunded applications from tenants.

Among the other measures Make the Road Action wants to see approved are the Coverage for All bill, which would give undocumented immigrants access to health insurance through the state's low-income public option (groups like MRA Action also have pushed for years to pass the New York Health Act, which would create a single-payer health insurance system in the state); passage of the Solutions Not Suspensions Act, which would limit the use of school suspensions, which tend to disproportionately harm children of color; the creation of a $1 billion Housing Access Voucher Program for people at risk of homelessness and those living in homelessness; passage of the Stop Violence in the Sex Trades Act, which would decriminalize sex work, among other measures; expanded access to child care; and other proposals.

For Williams, the endorsement is among several he received this week, and others in past weeks and months, such as from New York City Comptroller Brad Lander and Brooklyn Borough President Antonio Reynoso, both fellow Brooklyn progressives, as well as former Buffalo mayoral candidate India Walton.

“Jumaane Williams is a rare public official, one who's dedicated his time in office to empowering all New Yorkers,” Council Member Nurse of Brooklyn said in a Tuesday statement endorsing Williams. “We need progressive leadership in Albany that will empower and be accountable to working class communities across this state, and that's exactly what Jumaane would provide.”

For her part, Hochul has been out-fundraising the field by many millions and also racking up endorsements, including from many Democratic county party chairs and members of the State Legislature, among others.

On Thursday, New York Communities for Change, an advocacy group focused on housing, economic justice, and climate change and claiming more than 20,000 members, also endorsed Williams. “Make no mistake: Jumaane knows us, and we know Jumaane. He is up against a very well-funded corporate Democrat, which is why we urge other grassroots groups around the state with large bases of voters to get off the sidelines,” said Marie Pierre, NYCC board chair, in a statement. “From Brooklyn to Buffalo, it’s time for progressives to unite around Jumaane and jump into this Democratic primary with full and energetic support for his campaign. Our state needs a robust Democratic primary in which Hochul is held accountable for her failure to deliver for tenants and communities hit hardest by COVID. Jumaane is ready to deliver that accountability, present a better alternative to Hochul, and campaign to win.”