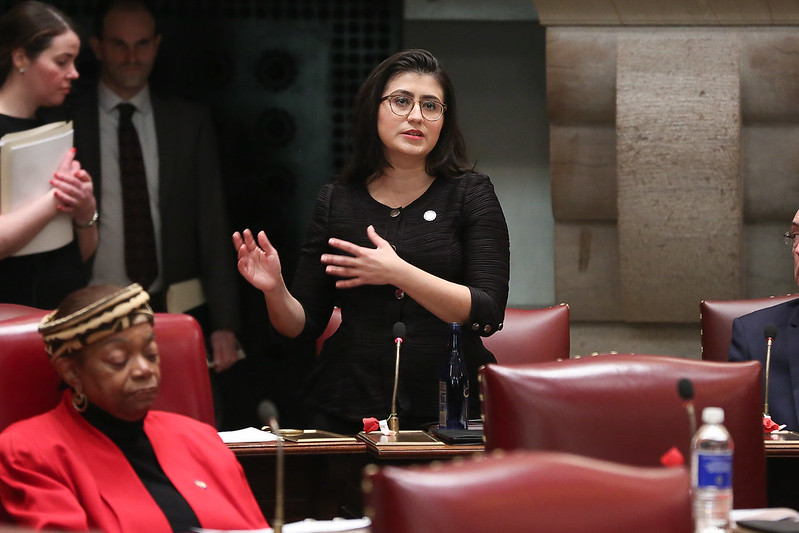 New York should more aggressively tax the state’s billionaires and large businesses to support workers, provide child care, and boost a just economic recovery from the pandemic, according to State Senator Jessica Ramos.

Speaking on a recent episode of the Max Politics podcast from Gotham Gazette, Ramos, a Queens Democrat and chair of the Senate's labor committee, outlined her 2022 goals. At the top of the list is vastly expanding affordable child care across the state through legislation Ramos is sponsoring. Also on her agenda is replenishing, with $3 billion at that, the Excluded Workers Fund, passing legislation to tie increases in the state’s minimum wage to inflation, establishing a wage board for workers in the nail salon industry, and more.

“I’ve always said I’m interested in helping more New Yorkers become millionaires,” Ramos told podcast host Ben Max. “We need to pump more money into our smaller communities, and really invest in entrepreneurship, which is why I also fight so hard for street venders and for small business owners, especially restaurant owners. We have to stop letting billionaires pay fewer taxes than us, because they’re hoarding the money. They’re keeping all of their assets and it doesn’t get pumped back into our streets.”

Ramos is focused first and foremost on negotiating the passage of a version of her recently-introduced Early Learning Child Care Act. It would provide universal access to child care across the state by subsidizing child care for 93% of New York's working families. Under current policies, New York is able to subsidize daycare and early childhood education for families making up to 200% of the poverty line, but Ramos’ bill would double that threshold to 400% of the poverty line. The bill would also set a minimum wage for daycare workers, $45,000 a year, and support the small businesses that often run the programs through increased government funding.

“I feel like our society has been treating our daycare providers as some sort of babysitters when actually, they're educators and they are helping us raise our children and play a great, great, role,” said Ramos. “That's why we want their wages to be comparable to teachers and why we want to take the money out of the equation, so that the daycare professionals can focus on the task at hand.”

To pay for the bill, Ramos proposes a tax increase for New York’s top 5% of big businesses. Ramos believes that by providing support for early childcare, these businesses will eventually benefit from a better educated workforce.

“A lot of these kids are really only 20-25 years away from working for some of the biggest companies here in New York State,” said Ramos. “We believe this is a smart investment for them to make for their current workforce and their future workforce.”

Ramos said she is happy that Governor Kathy Hochul, a Democrat, has made child care a focus and she wants to negotiate increases to what the governor is proposing to expand offerings. When asked, Ramos also explained to Max that she is supportive of her colleague, Brooklyn Senator Jabari Brisport, who has introduced his own version of a universal child care bill. Ramos explained that she believes her bill is more practical, but that she is a co-sponsor of Brisport’s bill and supports its operating principle of the state simply offering free, universal child care for all. Brisport, a member of the Democratic Socialist of New York City, is chair of the Senate’s committee on children and families. Both Ramos and Brisport went on separate child care tours of the state and introduced separate bills, but Ramos said there is no rivalry at play.

Eyeing the April 1 deadline for the state’s next budget (fiscal year 2023), Ramos also wants to pass a renewed Excluded Workers Fund. Approved right before the budget’s deadline last year, the $2.1 billion Excluded Workers Fund provided one-time pandemic era grants of up to $15,600 to New Yorkers, primarily undocumented immigrant workers, who were not able to recieve Federal covid relief or unemployment insurance and bore the brunt of the pandemic’s economic burden. However, Ramos sees this fund as only an initial step towards covering the state’s excluded workers.

“With that first version of the Excluded Workers Fund that we passed and implemented last year, we had created two tiers and yet 99% of those who were approved, were approved for tier one.” said Ramos. “That means that they had paid taxes in 2019, 2020, and 2021, and yet they didn't qualify for any [prior] benefits. I mean, I don't know about you, but to me, that's wild, right? Because that means that that system is completely out of whack with how the actual workforce is maneuvering in our economy.”

With a second round of funding, Ramos wants to create a more permanent and sustainable fund that will be more “fair” for the state’s taxpayers. “I’m coming back for $3 billion more,” she said.

Another priority for Ramos in 2022 is to pass her bill that would raise the minimum wage to keep up with inflation, and ensure it continues to do so, instead of the state government having to pass additional increases. Making the minimum wages “pegged” to inflation would help New Yorkers keep up with increasing costs of living, she said.

On the podcast, Ramos touched on an array of other topics from addressing mental illness to bail reform to unfair labor practices “sector-by-sector” or industry-by-industry. Ramos wants to wield the power of her office and role chairing the Senate labor committee to mediate labor disputes in the nail-salon industry and ensure Uber and Lyft pay into unemployment insurance via what she says is hundreds of millions of dollars owed. Ramos has recently introduced legislation that would create regulations around "sectoral bargaining" in the nail salon industry, something of a follow-up to her work on farm-workers passed in 2019.

Ramos stressed her support for the Good Cause Eviction bill that would “prohibit the eviction of residential tenants or the non-renewal of residential leases without good cause.”

She said there are conversations happening in the Legislature about revisiting bail reform, but defended changes to the bail law that have been made in recent years, and spoke of her bill to expand and support treatment servics for individuals arrested with serious mental illness, drug misuse issues, and more.

In the podcast’s final minutes, Ramos spoke about this year’s elections, including the gubernatorial primary, and whether she has any concerns about how far left she is pushing the Legislature, which includes a number of Democratic colleagues who represent more moderate districts. Ramos endorsed Attorney General Letitia James in her run for governor, but James then announced in December not to run against Hochul and instead to seek reelection. Ramos declined to say whether she was looking at backing Public Advocate Jumaane Williams, a Brooklyn progressive, in the race and said she is always hoping to have a good working relationship with the governor.

“Petitioning is starting in February, but really I’m hunkered down trying to figure out my own operation, Ben, to be honest with you,” said Ramos. “But as we know, the cookie crumbles very fast in politics, so we might have to check in again in a few weeks.”