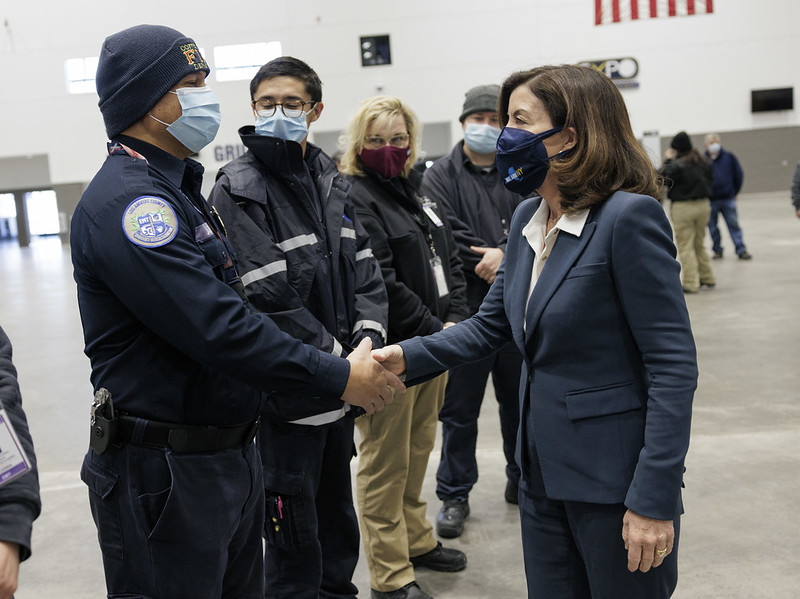 Despite recruitment and retention challenges, state agencies will be able to achieve Governor Kathy Hochul’s plan to return staffing to pre-pandemic levels, officials testified Monday at a legislative budget hearing.

"I believe that all agencies will be able to attain that goal," said Acting Commissioner of the Department of Civil Service Rebecca Corso, referring to the governor’s vision for next fiscal year, which begins April 1, as outlined in her recently-released Executive Budget. The state's plan is "to incentivize, it's to recruit. It's to go out and try to encourage individuals to come into the state workforce," Corso told legislators from both houses at Monday’s hearing, one in a series being held jointly by the two houses.

That will be a formidable task, according to lawmakers at the budget hearing focused on workforce development, who grilled Hochul administration officials about aspects of the governor's $216 billion budget proposal. The legislators noted changing labor needs, ongoing pandemic-related fatigue, an aging government workforce, and the steep competition agencies are facing from private employers, particularly in growing sectors like healthcare.

Hochul wants to raise the portion of the state workforce in the executive branch to 118,700 full-time employees, up from 107,500 in August, one of the lowest levels in decades. The plan entails shrinking some departments while building up others, and the administration is relying on the ability to attract job candidates from other states and the private sector, and keep most of the employees it has. Across all 59 executive agencies, as well as SUNY, CUNY, and the offices of the state attorney general and comptroller, Hochul's proposed budget would bring the state workforce to 184,000. (That doesn't include the over 100,000 employees at public authorities like the MTA.)

The pandemic has created new needs for New Yorkers and forced agencies to shift programming to meet them. Hochul's executive budget includes billions in new spending to respond to the ongoing public health and economic crises, including hiring more agency staff.

"My understanding is that in all areas across state agencies they are increasing their workforce to meet these critical needs," said Corso.

In September, Hochul lifted a hiring freeze on state agencies through the end of the current fiscal year, which allows agencies to bring on staff without a waiver from the state Division of Budget. Attrition since the freeze was enacted by Governor Andrew Cuomo in March 2020 as the pandemic took hold has dragged the state employee headcount down.

"As we continue to combat the pandemic, we must keep New York moving forward and that includes building our workforce to ensure we can support New Yorkers at the highest level," Hochul said at the time. Hochul was able to make the move in large part because the state’s fiscal position is quite strong thanks to higher-than-expected tax revenues and massive amounts of federal aid.

"I'm very very thankful that Governor Hochul, one of the first things she did when she came in is she lifted the hiring freeze, so we have been hiring at a pretty rapid clip and it's impactful across the agency," said Department of Labor Commissioner Roberta Reardon at the hearing Monday. Reardon’s agency is receiving seven times as many unemployment-related calls as it did pre-pandemic, she said.

Hochul's executive budget includes multiple measures aimed specifically at retaining and expanding the state workforce. The proposal contains measures to make the civil service exam more accessible and equitable, expand tech roles in government, and increase state hiring for people with disabilities. It also involves particular support for the state's healthcare workforce, like worker retention bonuses, part of a larger $10 billion plan to expand the sector by 20% over the next five years. And it includes $106 million to hire 880 full-time faculty at SUNY and CUNY.

At the hearing, Corso said a key effort to retain staff was ensuring employees had the opportunity for advancement, something made easier by lifting the hiring moratorium. Another was making the state workforce more diverse.

The executive budget includes $1.6 million in proposed funding to expand the Department of Civil Service's Office of Diversity and Inclusive Management. The office helps agencies "with the development of their strategic plans around diversity, inclusion, and equity" and provides training. That includes implicit bias training for 21,000 state employees since that training program was launched in late 2020, Corso said.

"We do recruitment and outreach across the state to identify and to find talent to come into the state workforce,” she said.

The state is also working to make the civil service exam, a tool to promote merit-based hiring in government, more accessible. That means new testing centers on SUNY campuses, legislation to speed up civil service hiring, and $2.2 million in funding to create a "test evaluation and validation unit" to ensure the exam is fair and unbiased.

"We think we should be doing this for all of our titles because it allows us to make sure that we are updating our data, updating our exam questions, and that we are making sure we're not unfairly discriminating against or making it more difficult for any populations to get into the state workforce," Corso said of her department’s review of civil service exams for certain positions.

State Senator Jessica Ramos, a Queens Democrat and chair of the Senate labor committee, said the state needs to do more to accommodate remote work or safety needs of pregnant employees in high covid-exposure roles.

"The truth is you have no policy for pregnant people," she told Corso. "That's something I want you to be very concerned with."

When asked by lawmakers what incentives the state had for healthcare workers to compete with private employers or who may be contemplating leaving the state to avoid the covid vaccine mandate, Corso cited $3,000 one-time worker retention bonuses. According to Hochul's executive budget, the program will cost an estimated $1.2 billion, including $120 million for state employees. When the bonuses run out, Corso pointed to a "robust" benefit package available to all state employees.

"New York State as an employer is a great employer to work for," she said. "We have a retirement plan that's available to them to the extent that they want to stay in the state workforce until they retire."

State Senator Robert Jackson, a Manhattan Democrat and chair of the civil service and pension committee, lambasted the state's pension program. "You must have heard from people even in your office that Tier 6 is terrible and about nurses being underpaid, and that's just giving you a couple of examples," he told Corso. "Because, I'm telling you, I'm hearing it."

"I want to know what's being done to address that so people can be able to live in New York and work in New York State and be able to afford to pay rent, pay for their home, educate their children, so forth and so on," he said.

Even if the state does achieve pre-pandemic workforce levels, that would still pale in comparison to the size of the workforce historically. In 2010, the employee headcount under the control of the governor was 131,000, about 25% smaller than it was two decades earlier.

"I heard you say that the governor has committed to repopulate the agencies back to pre-pandemic levels," said State Senator Diane Savino, a Democrat representing parts of Staten Island and Brooklyn, "but to quote my colleague, Senator Jackson, 'that sucks,' because we are at the lowest point we've been in more than 30 years."