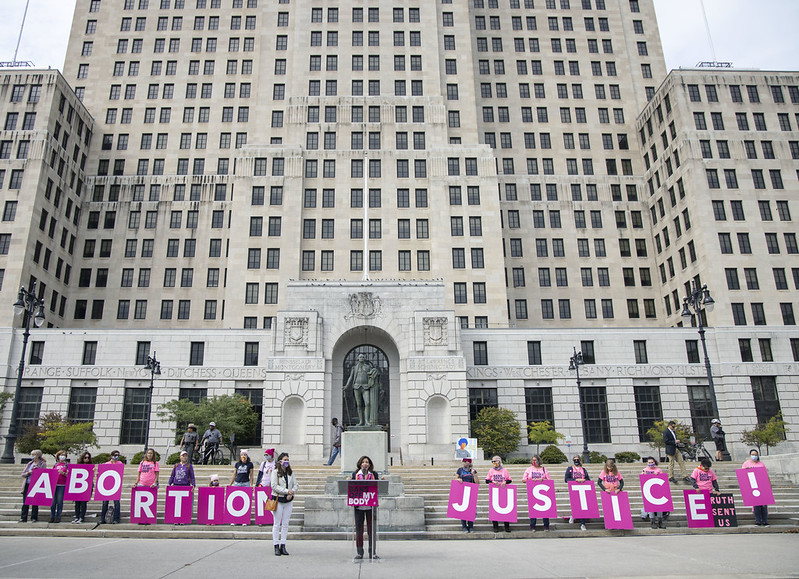 A draft majority opinion from the U.S. Supreme Court, which was leaked and reported on by Politico on Monday, would strike down the landmark 1973 Roe v. Wade decision that granted a federal constitutional right to an abortion. Though the opinion — on Dobbs v. Jackson Women’s Health Organization, a case involving Mississippi’s ban on abortions after 15 weeks — is not a final decision and is subject to change, it has caused national outrage among pro-choice elected officials, advocates, and individuals.

The draft opinion – which Chief Justice John Roberts confirmed on Tuesday was authentic – was written by Justice Samuel Alito with Justices Clarence Thomas, Brett Kavanaugh, Neil Gorsuch, and Amy Coney Barrett expected to concur in a majority. The judges would vote to overrule not only Roe v. Wade but also the Planned Parenthood v. Casey decision from 1992 that upheld the ruling. The court’s final decision is expected in June.

“This is not simply a draft of a devastating and politically motivated Supreme Court opinion, it is a roadmap for dismantling our fundamental right to safe, legal abortion, a right codified nearly FIFTY YEARS AGO,” said Joy Calloway, interim president and CEO of Planned Parenthood of Greater New York, in a statement. “Abortion bans are designed to deny Black, Latinx, Asian and Indigenous people their right to control their bodies and futures. These bans disproportionally harm people with low incomes who cannot afford access to fundamental health care or travel to get it. Abortion bans are the perpetuation of racism, sexism, and economic injustice in a country that has a long history of stripping people of their own personal autonomy."

Though the court’s decision could quickly lead to abortion bans in many states, including roughly 13 that have so-called trigger laws in place awaiting this type of potential ruling, and thus the criminalization of abortions across the country, New York would remain a state with access to safe and legal abortions.

New York’s original abortion law dated back to 1970 and was regulated under criminal law, before Roe v. Wade was decided. After decades, in January 2019, then-Governor Andrew Cuomo, a Democrat, and the Democrat-led State Legislature passed the Reproductive Health Act to codify the protections of Roe v. Wade into state law. The Act, passed just weeks into the first legislative session with Democrats in control of both houses of the Legislature, instead treated abortions as a matter of health care and legalized the procedure past 24 weeks of pregnancy if a pregnant person’s health or life are at risk, or if the fetus is not viable.

Legislators have since taken several steps to ease access to abortions as well as contraceptive care in New York and some have proposed additional measures, which are now being discussed with new urgency. On Tuesday, New York’s Democratic leaders responded swiftly and intensely to the draft opinion and promised to uphold and continue strengthening those protections.

Governor Kathy Hochul said at a news conference that she was “absolutely horrified” by the draft opinion. “I refuse to go backwards. and that's exactly the specter of what we're looking at when it comes to our fight for abortion rights,” she said. “So my promise is that here in the state of New York, we will not stand idly by. Anyone who needs care, we welcome you with open arms.”

“We're working proactively now in anticipation of whatever happens at the Supreme Court,” Hochul added. “Under my direction, the Department of Health is working closely with experts and advocates to issue regulations to ensure that telemedicine abortion is available here, to offer clear guidance to providers and provide information to patients about their right to abortion.”

Hochul said that both executive and legislative actions were being considered.

“If this decision comes to pass, there will be less access to safe abortions across the country, especially for communities of color and those with the fewest resources,” said Dr. Mary Bassett, state health commissioner, in a statement on Twitter. “New York State will continue to protect access to safe, accessible abortion care for anyone who needs it.”

Senate Majority Leader Andrea Stewart-Cousins, in a news conference, invoked The Handmaid’s Tale, the Margaret Atwood novel and TV show about a dystopian future America run by a patriarchal society where women and minorities are oppressed. “It is so much of a pattern, whether it's attacking voting rights, civil rights, women's rights,” she said. “It is frightening where we are in this nation and where we could be, even in this state, if we're not careful.”

Stewart-Cousins also cautioned that should Republicans regain control of the Legislature, abortion rights may be on the chopping block. As she noted, when the Reproductive Health Act passed in 2019, no Republican voted for it. “We are in the last line of defense, state legislatures, and even in the State Legislature, this could be hanging in the balance if Republicans quite honestly take the leadership,” she said.

When Hochul took office last year, after Cuomo’s resignation, she immediately launched a campaign to affirm abortion rights in the state, in the wake of anti-abortion legislation being introduced in conservative-leaning states like Texas. She ordered state agencies to coordinate a statewide public information campaign, including creating a patient bill of rights, and directed the state Department of Health to update regulations to provide access to medical abortions through telehealth visits.

On Tuesday, Hochul signed into law a bill adding a representative of women’s health service providers to the Public Health and Health Planning Council.

“Let me be clear. We're not playing defense. We're playing offense,” Hochul said Tuesday. “So my message to women all across this country is that New York, the state of New York will always be there for anyone who needs reproductive health care, including an abortion. And my message to those who will deny this fundamental right, basic right – You don't want to mess with us. You don't want to mess with the state of New York. And I assure you this is a fight that you will not win.”

On the legal front, New York State Attorney General Letitia James has joined with other attorneys general to file amicus briefs in court cases involving anti-abortion laws in other states, including the Mississippi case at the center of the draft opinion. On Tuesday, James joined other elected officials at a rally at Foley Square in protest of the opinion, where she revealed that she once had an abortion when she was a newly elected member of the City Council.

"Mississippi and other conservative-led states have declared an all-out war on women and their bodies, but New York cannot sit idly by as, one-by-one, these states try to take us backwards in time," James said in a statement Wednesday, also calling on the state to create a dedicated fund to help support women get abortions across the country.

Besides the Reproductive Health Act, the state Legislature has passed a series of other reproductive rights bills that became law in 2019. They included the Comprehensive Contraception Coverage Act, which requires health insurance companies to cover all FDA-approved contraceptive options, as well as contraceptive counseling and services; and the “Boss Bill,” which prohibits discrimination by an employer based on an employee or their dependents reproductive health care decisions.

There are also other bills in the offing that Democratic legislators are pursuing. State Senator Liz Krueger has sponsored legislation that would protect abortion providers by prohibiting law enforcement from cooperating with out-of-state investigations related to lawful abortions. Krueger has also proposed an Equality Amendment to the state constitution that would enshrine protections against discrimination based on race, ethnicity, national origin, disability, sex, including pregnancy and pregnancy outcomes, sexual orientation, or gender identity and expression.

In New York City, elected officials reiterated their commitment to standing up for reproductive rights.

“New York City knows that a woman’s right to make her own health care decisions is hers and hers alone,” said Mayor Eric Adams on Twitter. “This potential assault on their freedom by right wing extremists cannot stand. We’re ready to fight like hell.”

“Reproductive rights and abortion are cornerstones of public health,” said Dr. Ashwin Vasan, commissioner of the city’s Department of Health and Mental Hygiene, in a statement. “In New York City, we are committed to protecting abortion and reproductive health care services, and we trust pregnant people to make personal decisions about their health and their bodies.”

In 2019, the New York City Council created the New York Abortion Access Fund to help provide abortions to people living in New York and those traveling from out of state. New York was the first city in the country to fund direct abortion access and it has since helped hundreds of people obtain safe and legal abortions.

City Council Speaker Adrienne Adams was “beyond appalled and disappointed” by the Supreme Court’s draft opinion, she said Tuesday. “If this remains in a final decision, it would be an affront to women across the country,” she said in a statement. “The decades-long federal recognition of women's rights to control our reproductive health choices is an essential human right of self-determination. In New York, abortion rights are protected by state law, and we will remain a destination state for all women seeking abortion care. The U.S. Senate must do what’s right and immediately pass the Women’s Health Protection Act to ensure the fundamental health rights of women across this country are protected by federal law.”

The Women’s Health Protection Act would protect access to abortions at the federal level and has already passed the House of Representatives. But in the Senate, where Democrats have a razor thin majority, a vote to begin debate on the bill failed in late February after facing a Republican filibuster.

Senate Majority Leader Chuck Schumer of New York on Tuesday vowed to hold another vote. “This Senate will vote on the urgent need to protect a woman’s right to choose,” he said. “Americans are going to see where every senator stands. Senate Democrats are standing together to fight this awful decision coming from the Roberts Court.”

“Roe has been the law of the land for almost fifty years, and basic fairness and the stability of our law demand that it not be overturned,” said Democratic President Joe Biden, in a statement.

In remarks on Tuesday, the president said that the Supreme Court’s opinion, if issued as drafted by Alito, would be a “radical decision.” But he said he was not prepared to comment on whether the Senate should get rid of filibuster rules to approve the Women’s Health Protection Act. “I’m not prepared to make those judgments now…but, you know, I think the codification of Roe makes a lot of sense,” he said.