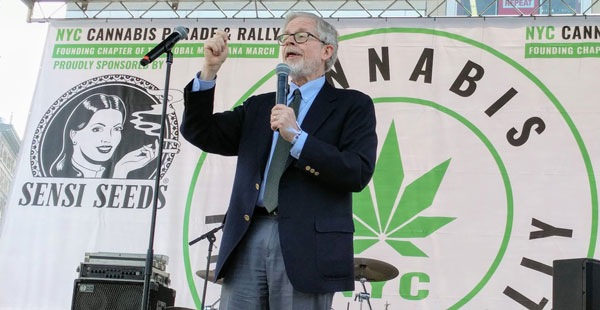 After 52 years as a member of the New York State Assembly, Richard “Dick” Gottfried is retiring. His half-century career makes him the longest-serving Assembly member in New York State history, a journey that began in 1970. A Democrat representing the 75th Assembly District, which includes parts of Manhattan’s West Side, Gottfried will also be leaving his post as chair of the Assembly Health Committee, which he has held for a mere 35 years, since 1987.

Gottfried announced his retirement in December, allowing for an open, competitive Democratic primary to replace him, the winner (the Gottfried-endorsed Tony Simone) all but assured to take the seat given the district’s overwhelming Democratic tilt.

It also allowed Gottfried a swan song in Albany, where he had another set of bills passed this year, though not his white whale: the New York Health Act, which would institute a state-run, single-payer, universal health care system in New York.

Along with public health and health care, Gottfried has prioritized human and civil rights, criminal justice reform, rights of the elderly, education, and issues of particular importance to his district. He’s sponsored more than 500 laws, according to his office.

“Just about every year at the end of session I feel great that we accomplished some important things, and that makes me want to come back. And at the same time, I’m always disappointed at things we didn’t get done, and that makes me want to come back. So, in many ways, this end of session was like many others,” Gottfried said, reflecting on his career and imminent retirement in a recent conversation with Gotham Gazette editor Ben Max on the Max Politics podcast.

Gottfried’s journey into the New York State Assembly began as a teenager in 1960, he said, when he was inspired by John F. Kennedy’s presidential campaign.

The Democratic party of Gottfried’s early career was not as influential in New York as it is today. As a result, Gottfried noted that many of his Democratic colleagues didn’t have long-term plans to stay in the Assembly. “When I arrived, it seemed like an awful lot of my colleagues were there either because it was the best job they could get or because they were biding their time until it was their turn to get elected to be a judge,” Gottfried said.

When he joined the Assembly, Democrats were actually in the minority, but the balance of power soon shifted in 1974 following the Watergate scandal. Following this shift, Gottfried saw considerable change in the passion of his fellow Democratic officials. “Over the years, more and more of the Legislature is people who are there full-time - who do not have another occupation. That’s really the majority, certainly on the Democratic side,” he said. Gottfried also pointed to the increase in diversity and progressivism within the Democratic Party as a significant change that has been “very much for the better,” though he said his own politics haven’t changed very much given how progressive he was when he was first elected.

While the Assembly never returned to Republican hands, for much of Gottfried’s tenure the State Senate or the governor’s office (or both) was in GOP hands, meaning a lot of compromise between the two parties. For roughly the last 15 years of his tenure, Democrats had the governorship, and therefore significant leverage to pass many priorities, especially in the last four years where the party controlled both houses of the Legislature as well.

Gottfried addressed several issues that he worked on early in his tenure and remain relevant today, referencing his early advocacy for marriage equality and the decriminalization of marijuana in New York. He also focused on health equity, including for LGBTQ New Yorkers.

In 1974, he negotiated with the Senate to classify possession of marijuana as a misdemeanor, a more moderate approach than Gottfried sought, but progress nonetheless, he said. It wouldn’t be for another four decades until marijuana was legalized for recreational use in 2021. The changes on the issue -- with the legalization of medical marijuana in between (in 2014) -- are emblematic of the long arc of Gottfried’s career and how movement on some issues takes time.

Gottfried noted that such sacrifices to policy purity are part of the job and knowing how to “work the system.” He discussed his sponsorship of the Child Health Plus Program, which today ensures child health care coverage up to age 19. When the bill was first introduced, Gottfried started small, calling for coverage up to the age of 12 with limited services.

The budget-conscious legislation was moderate enough to pass the Republican Senate, eventually expanding repeatedly. “You grab whatever you can at a given moment. And I don’t like to consider it a compromise. I consider it; half a loaf is better than none. You come back a year later and fight for more,” Gottfried said.

Gottfried began his foray into public health in the 1980s, taking over as Assembly Health Committee chair and pushing through legislation for the creation of the Prenatal Care Assistance Program (PCAP), which increased Medicaid support for mothers.

As a representative of Manhattan’s Chelsea, Greenwich Village, and surrounding areas in the ‘80s and ‘90s, Gottfried saw up close how devastating the HIV/AIDS epidemic was locally, especially for the substantial LGBTQ community in his district and nearby. During the epidemic he advocated for confidential HIV testing and treatment, which went on to become law in many other states as well. Representing Chelsea amid that public health crisis was part of why Gottfried said he sought to become the Health Committee chair, a position he has held from 1987 through this year and that has come to define his public service career in many ways.

“It was a big change in my career. It totally changed the set of issues that I work on. It’s about the best thing I’ve ever done in my career,” Gottfried told Max on the podcast.

Gottfried’s role as health committee chair concludes amid another major infectious disease crisis, the COVID-19 pandemic. In reflecting on his work and that of his colleagues, he said: “The State could have done more to get state funding for masks and other personal protective equipment out. We certainly could have done more to support safety net hospitals that serve low-income communities that were the hardest hit by the pandemic. The state should have done a lot more both before the pandemic and during the pandemic to provide adequate funding for those hospitals.”

Another major issue during the pandemic that Gottfried reflected on was the lack of transparency over covid-related nursing home deaths, many of which went uncounted by the administration of then-Governor Andrew Cuomo, at least initially. For “several years” data was only shared on residents who died of covid inside nursing facilities, Gottfried noted, “But if they were taken to the hospital and died at the hospital, the Health Department didn’t tell us that that was a nursing home death. It’d be like if you were hit by a car and taken to the hospital and died there, and they didn’t count it as a traffic death.”

One of the defining bills of Gottfried’s career and time as chair of the health committee is the New York Health Act (NYHA), which would institute single-payer health care in New York, creating universal health care coverage under one government-run system and eliminating private insurance. Gottfried first introduced the bill as lead sponsor 30 years ago, in 1992, and has advocated for its passage since while tweaking it along the way. He never got it passed, though, including during the Democratic takeover of state government over the last four years.

“Just about every problem we face in health and health care – whether that's as a patient or employers, taxpayers, doctors, hospitals – is made worse and harder to solve because of the way we pay for healthcare in this country,” Gottfried said on the podcast, discussing his push for the bill and disappointment in not seeing it passed.

Gottfried criticized the current healthcare system in the United States as “pretty crummy,” pointing to costly deductibles, co-pays, and out-of-network charges as causes for poor outcomes and health care debt. Gottfried said a single-payer system would work towards mitigating inequality in the healthcare system.

A major point of concern over the bill is the cost, and raising taxes on many New Yorkers in order to pay for the new health care system, though it would eliminate many health care costs. Gottfried referenced a RAND Corporation study from 2018 that found that only the top 5% of income earners in New York wouldn’t save money from the passage and implementation of the New York Health Act.

“95% of New York households would spend less than they now do on health coverage and health care under a single-payer system,” said Gottfried.

But the bill, which would create immense change in the New York economy, has not been passed despite a majority of sponsors in the Assembly (where it passed multiple times before Democrats took the Senate) and nearly a majority in the Senate.

Gottfried cited recent opposition from public employee unions who like their plum health coverage as a key part of why Democratic officials have yet to pass the bill. Gottfried said many union leaders have developed track-records of bettering union health packages, helping them get re-elected. Public employee health coverage is superior “by American standards,” Gottfried noted, though not perfect, requiring trade-offs of wages for benefits.

“The struggle will continue,” Gottfried said of trying to pass the health act. He said he is willing to work with whoever takes over as lead sponsor of the New York Health Act in the Assembly.

“New Yorkers need to keep a close eye on your legislators,” Gottfried continued. “Watch what they’re doing. Support them when they’re doing the right things, let them know when they’re not. It’s really a central part of our public life.”

[LISTEN to the full conversation: Max Politics Podcast: Dick Gottfried on 52 Years in the State Assembly]