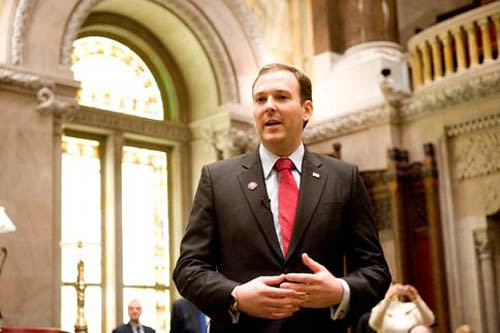 U.S. Rep. Lee Zeldin, the Republican nominee for governor, was denied the additional general election ballot line for the Independence Party on Thursday after election administrators found his campaign had submitted over 12,000 invalid ballot petition signatures. The petition was reviewed after Libertarian Party officials filed an objection, claiming they found over 11,000 signatures that had been duplicated by photocopy on the document submitted to the state Board of Elections.

Republicans had filed an independent nominating petition for the Independence Party ballot line on behalf of Zeldin and his running mate, Lieutenant Governor nominee Alison Esposito, as well as Republican nominees for comptroller, attorney general, and U.S. Senate. Under New York’s fusion voting system, candidates can appear on multiple party lines. If the Republican petition had been successful, the Independence Party would have been back on the ballot after it had lost its line in 2020 when the state adopted stricter ballot access standards. But the state BOE voted Tuesday to invalidate the entire Republican slate's ballot petition.

The BOE determined that 12,868 of the petition's 52,096 signatures were invalid, thus falling short of the 45,000-signature threshold needed to get a third party on the ballot. Typically, campaigns submit more signatures than they need with the expectation that their opponents will challenge the validity of some of them.

In this case, the challenge was brought by Andrew Kolstee, secretary of the Libertarian Party, which also lost its regular ballot line in 2020, with the assistance of Diane Sare, an independent candidate for U.S. Senate. The party alleges over 11,000 of the rejected signatures had been photocopies of signatures the Zeldin campaign had already submitted.

"The Zeldin campaign’s attempt to defraud the electorate and pose as an independent campaign by filing thousands of photocopied signatures is a slap in the face to New York State voters and the election process,” Kolstee said in a statement in a Libertarian Party's email sent to members and press.

"I actually started out by running them through a program looking for duplicate copies and came across several of them," Kolstee told Gotham Gazette in a phone interview on Thursday. "That's when we discovered it and then we just started counting them up and came to find out there were over 900 sheets, over 11,000 [signatures]."

A spokesperson for Zeldin said the campaign had not reviewed the objections but denied photocopying signatures.

"Being nearly an entirely grassroots effort, we haven't reviewed all of the petitions nor the specific objections associated with them," wrote Katie Vincentz, the campaign spokesperson, in an email. "In the final few days leading up to the filing deadline, tens of thousands of signatures from all over the state had to be immediately turned into the Board of Elections. While the Zeldin for New York campaign is not aware of photocopies, we certainly didn't make any photo copies."

A spokesperson for the State Board of Elections confirmed that the petition had been invalidated but would not comment on the reason for rejecting the signatures.

"My reaction to it was, 'wow,'" said Sarah Steiner, a veteran election lawyer, who was not involved in the case.

"Unless somebody accidentally mixed in pages that they had photocopied and then paginated them, in which case they would still be invalid, that's a massive attempt at fraud," she told Gotham Gazette of the allegedly duplicated signatures.

Having thousands of signatures thrown out isn't uncommon, Steiner said: "It doesn't surprise me that a petition that has 52,000 signatures doesn't have 45,000 valid signatures because even the best petitions are probably 80 percent valid, usually. So it's a very thin margin."

It would take hours to go through each page of the petition to identify duplicates – something State BOE administrators apparently did – in order to corroborate Kolstee's allegations of fraud. But the manner in which the duplicates appear on the petition may be telling of the motives behind them, Steiner suggested. According to Kolstee, the photocopies are scattered throughout the petition in chunks of various sizes, not grouped together in one place.

"That sounds like a deliberate attempt to pad the petition," Steiner said. "Whereas you can kind of see how a bunch of copies could be picked up and bound inadvertently, if they were all together."

Zeldin and Esposito will still appear on the Conservative Party line in the general election, where they face the Democratic ticket, Governor Kathy Hochul and Lieutenant Governor Antonio Delgado, who are running on the additional Working Families Party line.

New York State Democratic Party Chair Jay Jacobs pointed out Thursday that Zeldin was among the Republicans who falsely claimed that the 2020 presidential election was fraudulently decided and voted against certifying President Joe Biden's victory. "Let's not forget: Lee Zeldin was one of the many far-right Republicans who voted to overturn the 2020 presidential election under the guise of election fraud — a dangerous conspiracy theory peddled by Donald Trump and his pawns in Congress," Jacobs said in a statement to Gotham Gazette. "Now, Zeldin submitting 11,000 fake signatures just emphasizes his hypocrisy and proves he is willing to sell New Yorkers another 'Big Lie' to benefit his failing campaign."

In 2020, as part of a move backed by then Governor Andrew Cuomo, state lawmakers significantly raised the threshold for parties to keep their ballot lines. The move was widely criticized by minor parties that now had to receive a far greater number of cast votes and achieve that feat more often – every two years (in presidential and gubernatorial elections) as opposed to every four – in order to stay on the ballot in the next election cycle. Lawmakers also raised the number of signatures needed for statewide candidates to get on the ballot from 15,000 to 45,000.

The Green and Libertarian parties also failed to secure the requisite number of signatures to get candidates on the ballot this fall, as did candidates for several other minor parties.