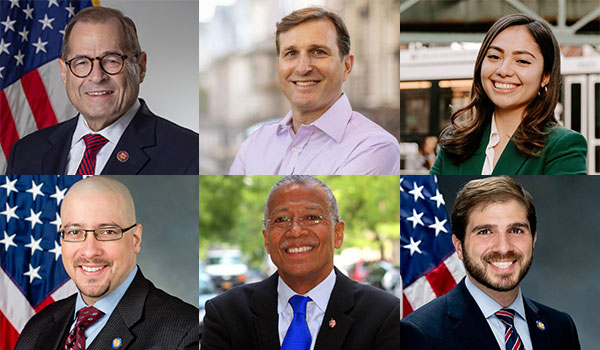 New York’s second primary election of the year has concluded, determining the general election nominees for the House of Representatives and State Senate. There were several competitive races, mostly among Democrats, across the city and state and while winners have been declared in most of them, a few are too close to call and could be decided in the coming days once thousands of absentee ballots are tallied.

This was the first-ever primary held in August, a result of a chaotic redistricting process this year, and turnout was low in most races. With new district lines in place, there were many high-profile Democratic primaries on Tuesday involving incumbents facing challengers, open races and longtime Democratic officials in direct competition. Some races may not be decided for days as the Board of Elections undertakes the task of canvassing absentee ballots, including giving voters the chance to correct erroneously marked ballots. In New York City, 62,649 votes were cast through absentee ballots through August 23, but only those that were canvassed through August 19 were included in the unofficial election night results.

Goldman won the race, which was called at 12:39 a.m. on Wednesday by The Associated Press. Niou trailed him in second place, while Jones came in third and Rivera was a close fourth.

One of the most closely watched races was the Democratic primary for the new 12th Congressional District, which combined the East and West Sides of Manhattan, from roughly 13th Street to 110th Street, and set up a clash between veteran Democratic Reps. Jerry Nadler and Carolyn Maloney. Nadler handily won the race, with 55.4% of the vote against Maloney’s 24.18%, while a third candidate, attorney Suraj Patel, got 19.02%.

In the 19th congressional district, there was a special election under the old district lines to complete the remaining term of Democratic U.S. Rep. Antonio Delgado after he became lieutenant governor earlier this year. The race was being watched nationally as a bellwether for Democrats as they seek to hold on to their majority in the House of Representatives by energizing their base over abortion rights in the face of a Republican wave in the midterms. Democrat Pat Ryan, the Ulster County Executive, emerged as the winner, defeating Republican Dutchess County Executive Marc Molinaro.

In the State Senate, several incumbent Democrats fended off tough challenges on Tuesday.

In District 31, which covers parts of Manhattan and the Bronx, State Senator Robert Jackson defeated three challengers to win his primary, including Angel Vazquez, who had been endorsed by U.S. Rep. Adriano Espaillat.

In Broooklyn’s District 25, State Senator Jabari Brisport held his seat against two other candidates, including Rev. Conrad Tillard, who received an endorsement from Mayor Eric Adams.

State Senator Kevin Parker held on in Brooklyn’s District 21, beating two challengers, including David Alexis, a progressive who had been backed by the Working Families Party and the New York City Democratic Socialists of America (NYC-DSA).

The redistricting process created two new Senate districts in the city and there was a competitive open race for the new District 59, which spans across neighborhoods in Manhattan, Brooklyn and Queens. Kristen Gonzalez, a progressive endorsed by the NYC-DSA, came out on top in the primary, defeating former City Council Member Elizabeth Crowley, a moderate, and Michael Corbett, vice chair of the state Democratic Party.

Here’s a full look at the results from Tuesday night, with some absentee ballots still being counted. In almost every State Senate seat in New York City, the Democratic primary winner is all but certain to win in the general election given the overwhelming Democratic voter enrollment advantage in the city.

In the 3rd Congressional District, Democrat Robert Zimmerman has won, defeating four other candidates. The new district covers the northern half of Nassau County on Long Island.

In the 4th Congressional District, Democrat Laura Gillen has won, defeating three other candidates. The new district covers the southern half of Nassau County on Long Island.

Democrat Max Rose has won the Democratic primary for the district, defeating two other candidates. The district covers the entirety of Staten Island and parts of South Brooklyn.

In the 12th Congressional District, Democratic U.S. Rep. Jerry Nadler has won, defeating fellow Democratic Rep. Carolyn Maloney, attorney Suraj Patel, and Ashmi Patel. The new district combines the East and West Sides of Manhattan, from roughly 13th Street to 110th Street, with variation on each side of Central Park.

In the Republican primary for the district, Assemblymember Michael Lawler has won, defeating four other candidates.

In the 18th Congressional District, in the Mid-Hudson Valley, Democrat Pat Ryan has won, defeating two other candidates.

In the 21st Congressional District, Democrat Matt Castelli has won, defeating Matthew Putorti. The new district covers most of the North Country and Adirondacks, and parts of the Capital region,

In the Republican primary for the district, Brandon Williams has won, defeating Steve Wells.

In District 23, Democrat Jessica Scarcella-Spanton has won, defeating three other candidates in the Democratic primary. The new district covers Staten Island’s north and east shores and parts of Brooklyn, including Coney Island.

In the Republican primary for the district, Joseph Tirone Jr. has defeated Sergey Fedorov.

In District 34, Democrat Nathalia Fernandez has won, defeating two other candidates. The new district covers the East Bronx and parts of Westchester.

In District 47, Democratic State Senator Brad Hoylman has won, defeating his challenger, Maria Danzilo. The new district covers the West Side of Manhattan from the Meatpacking District to the Upper West Side.

In District 59, Democrat Kristen Gonzalez has won, defeating two other candidates (another two candidates were on the ballot but dropped out of the race). The new district covers parts of Midtown East in Manhattan, Greenpoint in Brooklyn, and Astoria and Long Island City in Queens.