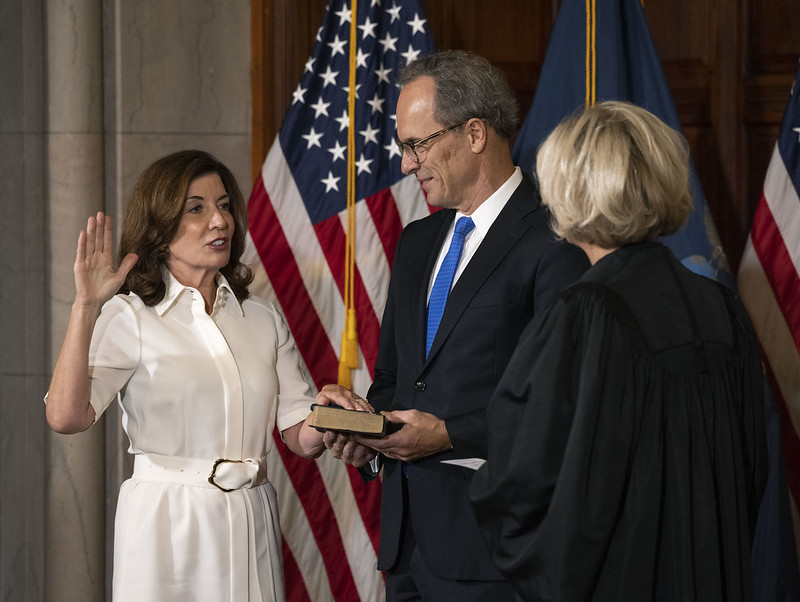 Democrat Kathy Hochul, New York's first female governor, was elected to the position for the first time Tuesday, winning a full term in a race that put Democrats' control over the traditionally blue bastion to the test.

The race was called just after 11 p.m. Tuesday, with Hochul beating her Republican challenger, U.S. Rep Lee Zeldin, by an unclear margin given lags in vote reporting from Zeldin’s home county of Suffolk. By early Wednesday morning when most votes were counted, Hochul's margin over Zeldin was 52-47%, largely due to her advantage in New York City.

Despite several Republicans gains in New York races for the House of Representatives, as expected in the first mid-term election of Democratic President Joe Biden’s tenure, many Democrats including Hochul won in New York and beyond. Democrats overall had a far better night than expected nationally, though Republican wins in New York may be key to tipping the balance of power in the House, where Democrats currently have a slim majority. While several Democratic state legislators appear to have lost their seats, the party will continue to have large majorities in both houses of the State Legislature.

Hochul, a native of the Buffalo area and the first upstate governor in many decades, will again be joined in office by her running-mate, Lieutenant Governor Antonio Delgado.

“I’m deeply honored to be the first elected female Governor in New York history,” Hochul said in an email to supporters on Tuesday night after some outlets called the race and she declared victory on Twitter, then made a victory speech at her Manhattan campaign event.

While Hochul ran on a platform of preserving reproductive rights, gun control, and democratic institutions, touting achievements from her initial year-plus as governor, Zeldin focused his campaign almost exclusively on rising crime and cost of living.

Hochul accrued votes on both the Democratic and Working Families Party ballot lines under New York's fusion voting system, while Zeldin appeared on the Republican and Conservative Party lines.

No Republican has won a statewide election in New York since Governor George Pataki won a third term in 2002. Coming into Election Day, hopes were high that Zeldin would break that streak, despite the fact that Democrats outnumber Republicans two-to-one across the state, and the GOP is even outnumbered by the number of party-unaffiliated registered voters.

Hochul's victory Tuesday capped off an election cycle that began not long after she took office in August, 2021 after the resignation of Governor Andrew Cuomo amid several scandals. Hochul, who won two statewide elections on a ticket with Cuomo as the lieutenant governor running-mate, solidified her position as the State Democratic Party's standard-bearer after handily staving off two primary challengers earlier this year. Throughout the primary and into the general election, she raised a massive sum of money, spending much of it on television ads.

Hochul spent months touting her record on abortion access and gun safety and casting Zeldin as an anti-choice, pro-gun Trump acolyte and 2020 election denier. She also highlighted a series of what she touted as achievements from her early tenure, including an expansion of child care and major economic development projects throughout the state, including for a new Buffalo Bills stadium and a deal to bring a massive microchip manufacturing plant to central New York, both with major state subsidies. Throughout the campaign, Hochul declined to offer a vision for a full term beyond a continuation of policies and projects already in place or in motion. She also took limited steps to more directly address the major criticisms Zeldin was running on, namely that she had not done enough to bring down crime or the cost of living amid an inflation spike.

"Because of you, we will keep making progress – breaking down barriers, breaking glass ceilings, helping New York achieve the greatness it is capable of," Hochul said to New Yorkers during her victory speech Tuesday night. "And I will lead with strength and compassion, not anger and fear. Together, we will ensure our values are put to work to lift up all and leave no one behind. Building a state where we can afford to raise our families. Where we create good paying jobs in the industries of tomorrow – from Long Island to NYC, to Syracuse to Buffalo. Where we expand safe, decent housing for all. Where our kids succeed in school and reach their full potential. Where we live without fear, safe in our neighborhoods and our subways with illegal guns off our street. Where our fundamental rights are protected and women can make decisions about our own bodies."

Polls and campaign finance data showed the race narrowing in recent weeks. Those numbers appeared to prompt a flurry of additional campaign activity by Hochul, including appearances by major Democratic Party officials on the campaign trail alongside her.

Zeldin, whose lieutenant governor running-mate was former NYPD inspector Alison Esposito, blamed a pandemic-era rise in crime on changes to state bail laws made by Democrats in recent years despite data showing no significant connection between bail reform and crime or rearrest rates. He also called for the repeal of other criminal justice reforms like limits on solitary confinement and changes to the state's Raise the Age law. Zeldin frequently said he would remove Manhattan District Attorney Alvin Bragg in a campaign line echoing calls from Republican governors and candidates in other states.

Hochul consistently emphasized the need for tempered reform and pointed to her own successful push to give judges more discretion in setting bail, particularly for alleged repeat offenders.

"You can either work on keeping people scared or you can focus on keeping them safe,” she said last month at the only debate of the general election. She has also pointed to her work with New York City Mayor Eric Adams to convene other local, state, and federal officials in a multi-state taskforce to stem the flow of illegal guns. And she repeatedly painted Zeldin as a foe of gun safety, having voted against a ban on assault weapons and failing to appear for a vote on bipartisan gun safety legislation.

In the months leading up to Election Day, Zeldin largely shied away from discussing specifics on his policies related to abortion. On the debate stage in October, he refused to say whether he would sign abortion restrictions as governor or whether he would appoint a health commission dedicated to reproductive rights. To try to undercut Hochul’s attacks on the issue, he took the remarkable step of releasing a campaign ad promising not to change the state’s abortion law if elected governor, belying his long-time anti-abortion record.

Outside of crime, the congressman's biggest focus was economics, saying he'd lower state spending, cut taxes, and spur job growth through reduced regulations. He called for reversing New York’s ban on fracking for natural gas and approving new fossil fuel pipelines. On the campaign trail, Hochul emphasized the steps her administration has taken to ease pressure on New Yorkers' wallets, including expediting a middle class tax cut approved under Cuomo, a property tax rebate approved in the state budget earlier this year, and temporarily suspending the state gas tax.

She also hit Zeldin for his record in congress on economic issues, including his votes against the Bipartisan Infrastructure Law, the CHIPS Act, and the Inflation Reduction Act, while also stressing her efforts on fighting climate change and moving New York to renewable energy, including many job-creating projects.

Hochul also spent some of the campaign fending off attacks about her ethical record, from her time in the Cuomo administration to her misguided appointment of Brian Benjamin as her first lieutenant governor to her massive fundraising from entities with state business including specific allegations of pay-to-play.

Hochul's win was buoyed in part by the Working Families Party, which needed to garner 130,000 votes or 2% of the total in the governor's race, whichever higher, in order to keep its ballot line. The WFP appears to have met the necessary threshold, which was raised in 2020, and celebrated its win on Tuesday night. As did Hochul, even if the margin was closer than she may have liked.

“Now, this same grassroots movement that came together to build a new era for New York will continue fighting to safeguard reproductive rights, protect our communities from gun violence, create opportunities for working families, and so much more in the months and years ahead,” Hochul said in the Tuesday night email to supporters.

"In closing," she said during her victory speech, "the lesson of tonight’s victory is that given the choice, New Yorkers refused to go backwards in our long march toward progress."

Note: this story has been updated.