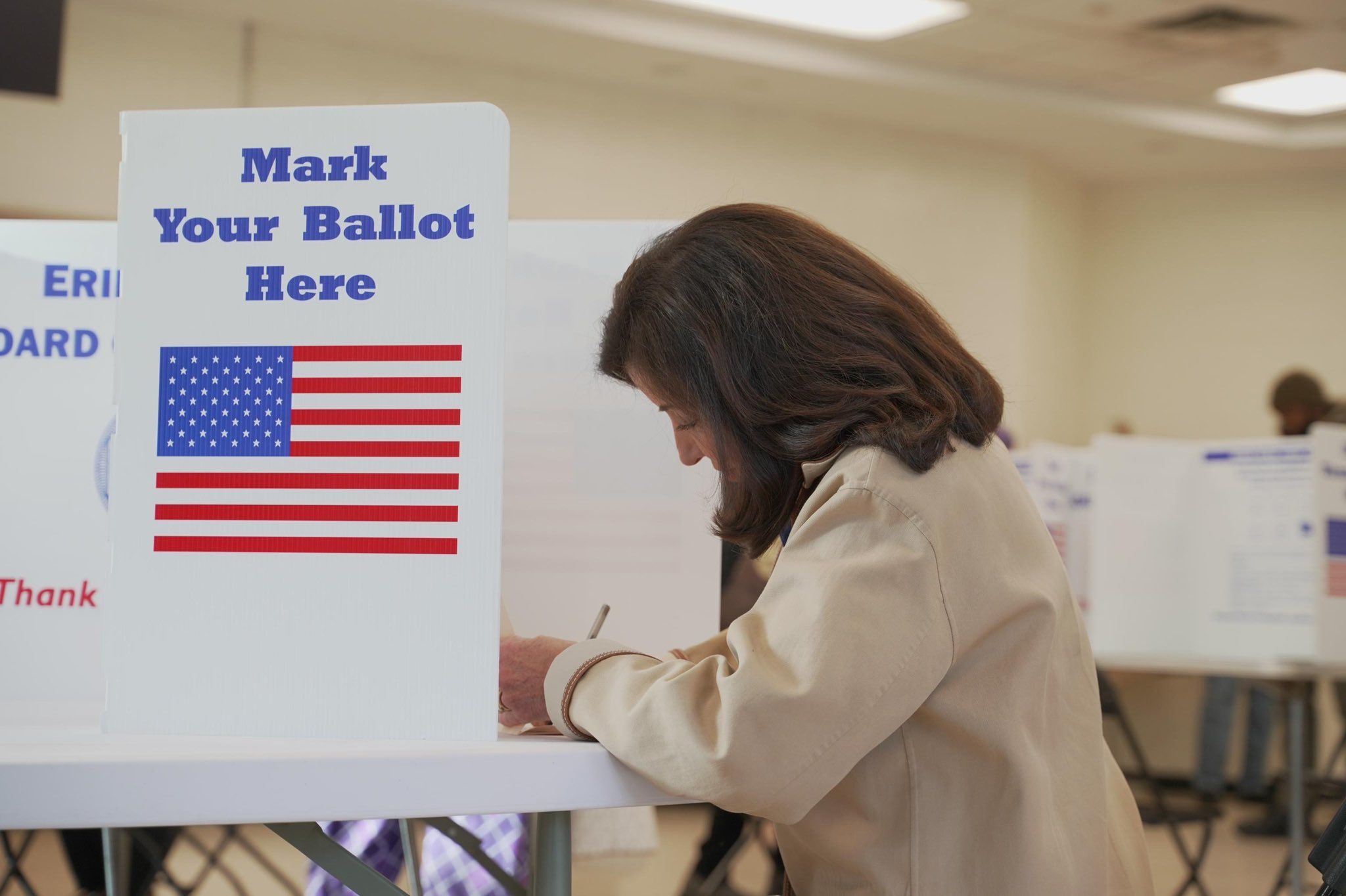 Approximately 5.7 million New Yorkers across the state cast ballots in one of the closest races for governor in over two decades, according to unofficial 2022 election data. Some votes, especially final absentee ballots, are still being counted.

That amounts to roughly 43% of New York's 13.1 million registered voters, a lower turnout than in the 2018 gubernatorial election, when a surge of electoral enthusiasm driven by opposition to the Trump presidency and other factors pushed turnout to 48%.

In 2018, Democrats cruised to victories in statewide races, including Governor Andrew Cuomo winning a third time by 23 points, and picked up several State Senate and other local seats. Most of the drop-off in turnout seems to have been among Democrats — Zeldin got 459,000 more votes than the 2018 Republican nominee, Dutchess County Executive Marc Molinaro, while Hochul got 677,000 fewer votes than Cuomo did last cycle.

But turnout this year is still higher than four of the five previous gubernatorial elections. It was significantly higher than the 33% turnout seen in the 2014 race – when Cuomo won a second term – which was the nadir of the last twenty years.

Governor Kathy Hochul, a Buffalo area Democrat and the first woman to be elected to New York's highest office, beat U.S. Rep. Lee Zeldin, a Republican from Long Island, 52-47%. It was a slimmer margin than any governor's race since Republican George Pataki unseated Democratic Governor Mario Cuomo in 1994.

The preliminary data shows Zeldin was able to temper Hochul's lead by doing particularly well among voters on Long Island and making inroads in some parts of New York City. Hochul, the first Democratic nominee from outside the New York City area in at least the last 50 years, was able to buffer Zeldin in upstate New York, where Republicans typically excel, by turning out voters in key population centers like her native Buffalo, as well as Rochester, Albany, and Syracuse.

New York City
New York City was both key to Hochul’s win but also a major source of the turnout drop-off from 2018. Roughly 33% of registered city voters cast ballots this fall compared to 41% in 2018. Turnout was still higher than the abysmal 23% showing in 2014.

In raw numbers, close to 1.7 million New York City residents voted – accounting for roughly 30% of the statewide vote share. That’s out of 5.2 million registered voters in the five boroughs as of the November 1 tally posted by the State Board of Elections.

Hochul beat Zeldin in the five boroughs by roughly 70-30%, a reliably wide margin in a city where registered Democrats drastically outnumber Republicans. Election strategists typically say a Republican candidate needs at least 30% of the city to have a chance of winning statewide. While Zeldin appears to have achieved that threshold, he was counting on a percentage closer to 35-37% in the city in order to win.

In the city's only Republican-leaning borough – Staten Island, which went to Zeldin 66-33% – turnout was 41%, the highest of any borough and the smallest drop (4 points) from 2018. Zeldin's wide margin is a striking shift from 2018, when Cuomo edged out Molinaro 49-48% on the island.

In Congressional District 11, which covers Staten Island and parts of southern Brooklyn, Republican incumbent Rep. Nicole Malliotakis beat challenger Max Rose by 24 points, 62-38%. The victory was a landslide in a district that has flipped twice in the previous two election cycles by six-point margins each time, with Rose winning in 2018 and Malliotakis unseating him in 2020.

Roughly 38% of registered voters in Manhattan voted, an 8 point drop from the 46% turnout in 2018. Hochul carried the borough 82-18%, the widest margin of any of the five, but not without ceding ground to Republicans, who nearly doubled their vote share from 2018. That year Cuomo got 85% of the Manhattan vote to Molinaro's 10%.

In the Bronx, Brooklyn, and Queens, Republicans' vote share was more than double what it was in 2018, with a nearly threefold increase in the Bronx.

Downstate Suburbs
The voter-rich swing districts of the New York City suburbs are another area considered key to any potential Republican success in statewide contests. A number of congressional and State Senate seats in the region swung to Republicans in this election after Democratic gains in 2018 and 2020.

Turnout in the suburbs was far higher than in the city, particularly on Long Island, where Zeldin rallied support among Republicans, independents, and moderate Democrats to win by significant margins.

Over 1 million voters cast ballots across Long Island's Nassau and Suffolk counties, a turnout rate nearing 49% (not including a handful of Suffolk County election districts that hadn't reported results as of Wednesday morning). Roughly one in five New York State voters was a Long Islander this fall. Long Island accounts for less than 15% of the state population.

Zeldin won in Nassau County 55-44% and Suffolk County 58-41%, according to preliminary numbers that could shift slightly as final votes are cast (absentee ballots tend to favor Democrats).

Republicans won in all four congressional races on Long Island by margins ranging from 4 to 22 points and flipped four State Senate seats there.

The city's northern suburbs, in Westchester and Rockland counties, were more divided. In total, the two counties had 352,000 votes for governor, a turnout rate of 40%. Those votes accounted for roughly 6% of the statewide vote.

Northern Westchester, Rockland, and parts of Putnam County were also the site of the race for Congressional District 17, one of the most-watched House races in the country and, like New York's other swing districts, one that could determine the balance of power in Congress’ lower chamber. Republican challenger Mike Lawler, an Assembly member, unseated incumbent Democrat Rep. Sean Patrick Maloney in that district, an upset making national headlines given Maloney’s position as chair of the Democratic Congressional Campaign Committee. The preliminary results show Lawler leading Maloney 52-46%.

Republicans also picked up a State Senate seat in the Hudson Valley, where Democratic incumbent Elijah Reichlin-Melnick lost to Republican Bill Weber by a narrow margin in a rematch of two years ago.

Key Upstate Counties
In Hochul's hometown of Buffalo and the surrounding Erie County, close to 338,000 residents, 51% of the county's registered voters, went to the polls. The governor won there 52-46%.

In Onondaga County, where Syracuse stands, 166,000 residents, or 51% of enrolled voters, turned out. Hochul won Onondaga 53-46%. That may not be enough to make a difference in the down-ballot race for State Senate in Syracuse, where Democratic incumbent John Mannion is trailing Republican Rebecca Shiroff by under a point, or fewer than 400 votes.