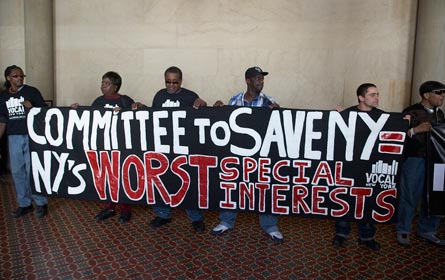 An important part of Governor Andrew Cuomo’s 2010 campaign platform was his promise to “clean up Albany.” The Governor’s campaign ads said that his experience as the state’s Attorney General would help him fight corruption that was blocking much-needed reform, and he laid out a 20-point plan to increase transparency and accountability in the capital.

Since being elected the Governor has continued to publicly condemn money coming from wealthy individuals and corporations willing to pay for influence in Albany. Yesterday the Governor saidthat he wants to overhaul the state’s campaign finance laws and has criticized Super PACs that can spend unlimited money in political campaigns.

"The power of money in the Capitol is unbelievable," Cuomo told Susan Arbetter on her Capitol Press Room radio show.

And the Governor counts among his legislative accomplishments his ethics reform bill passed last August that was supposed to increase public transparency in Albany.

The Governor has achieved a number of other legislative goals with the help of an organization called the Committee to Save New York. These goals include passing two on-time budgets, his Tier VI pension reform, a property tax cap and infrastructure investment projects. These proposals were all part of the Governor’s campaign promise to balance the state budget with no new taxes by cutting state spending.

The Committee to Save New York has supported the Governor’s efforts to cut budget spending and reform state pensions by running television and radio ad campaigns across the state extolling the Governor’s proposals. Experts say that the large amount of money the committee spends on these campaigns has helped the Governor pass his fiscal and economic agenda. The committee itself says that it has had a tremendous impact on state politics.

“The results speak for themselves,” said Michael McKeon, the committee’s spokesperson.

These initiatives, McKeon said, will help keep taxes low to spur private sector growth and job creation across New York. Kathryn Wylde, one of the committee’s co-chairs, has called its agenda “constructively anti-tax.”

The committee has spent heavily in advocating for its agenda. A report by the New York Public Interest Research Group said that the Committee to Save New York spent more money on lobbying in the state than any other organization last year. In total the group spent close to $12 million on its lobbying efforts.

But behind the television campaigns the Committee to Save New York has generated a great deal of criticism from good government advocacy groups and political opponents who say the committee exists to promote corporate interests by backing the Governor’s spending cuts and anti-tax initiatives.

Where exactly the committee’s money is coming from is a mystery, as the group has not released a donor list. But critics point out that the committee has links to some of the wealthiest individuals and corporations in New York.

“They come across as altruistic, but the policies they defend are to protect their bottom line,” said Kevin Connor of the Public Accountability Initiative, a public interest advocacy group.

The committee’s most important members, Connor said, are the Partnership for New York City, the Real Estate Board of New York and the Business Council of New York State. The board members of the committee and its partnered organizations include Wall Street CEO’s like Vikram Pandit of Citigroup, Lloyd Blankfein of Goldman Sachs and Jamie Dimon of JPMorgan Chase, and real estate moguls like Rob Speyer of Tishman Speyer.

Connor authored a report, called “The Committee to Scam New York,” that claims that these business leaders support the committee’s anti-tax agenda in order to line their own pockets. In the report Connor said that the committee formed in response to the economic crisis and financial meltdown that cut the state’s revenue. Business leaders, fearing that the state would raise taxes in order to make up for lost revenue, wanted to promote the Governor’s budget that focused on spending cuts instead of raising taxes.

“This is an interesting example of the â€one percent’ organizing for its own interests,” Connor said.

Connor estimated that the extension of the surcharge would cost individuals linked of the committee a great deal of money. He reviewed the compensation of 10 board members of the Partnership for New York City, including Rupert Murdoch and a number of Wall Street executives, and said that these board members would have to pay a total of $3.6 million more in state taxes because of the surcharge.

Corporations linked to the committee have also saved a great deal of money in the form of state, federal and local subsidies, Connor said. Since 1988, he said, 39 corporations linked to the committee have received more than $2 billion in public subsidies in the form of tax breaks, infrastructure projects and grants. Most of these subsidies are billed as job creation initiatives, but Connor cited a 2010 study by New York Jobs with Justice that found that the state had spent $135 million in subsidies on businesses that failed to create or cut jobs.

The New York Times reported that the committee was formed at the end of 2010 at the request of Cuomo to counter public unions by organizing business groups behind his budgetary policies.

“They’ve been in lock-step with the governor all along,” Connor said of the committee.

One of the committee’s other founders, Ken Adams, a former President of the Business Council of New York State, serves as president of the Empire State Development Corporation, the state’s chief economic development agency. Governor Cuomo nominated Adams for the position after he helped found the Committee to Save New York.

The committee and the Governor’s office have always denied coordinating their campaigns though. Michael Mckeon, the committee’s spokesperson, said that the Governor was not involved in the committee’s formation. The group, he said, was started by a group of business and labor leaders to support a reform agenda. Albany had long been dominated by special interests, McKeon said â€“ although he would not specifically identify those special interests.

The committee has since helped the governor pass two balanced budgets on time with no new taxes and reductions in state spending, McKeon said. This past budget cycle the group spent an estimated $3.9 million in ads supporting the Governor’s budget proposal.

“We believe the pension reform plan adopted this year was transformative,” McKeon said. “We are very pleased with the final result.”

The pension plan will raise the retirement age for state workers and increase their contribution to the pension system. This will save the state and local governments $80 billion over the next 30 years, according to the committee.

The committee also helped push through a cap on property taxes in the state. The cap mandates that local governments and school districts can only raise property taxes by two percent annually. The Real Estate Board of New York, one of the committee’s members, has long supported a property tax cap on behalf of the real estate developers that it represents.

McKeon said that the committee’s next issue to tackle will be cutting spending mandates for local governments. These mandates, the committee argues drive up local taxes across the state and encouraging businesses to move elsewhere. The Governor has already passed some mandate relief initiatives such as cutting local government contributions to pensions and directing the state to pay for part of local governments’ share of Medicaid.

The committee’s support of the Governor’s pension reform pitted the group against the state’s public sector unions like the New York State United Teachers. Despite resistance from the unions, the committee helped the Governor push through most significant parts of his reform plan.

“I think most New Yorkers see these slick commercials and they have no workers from the debate in Albany.

Many of the committee’s critics, including Korn, have also said that the committee is not held to a high enough standard of transparency. The committee has never released its donor list, has yet to file its required paperwork with the state’s Charities Registration Bureau, and didn’t release its board list until January of this year.

“We have to disclose every dollar we spend and collect,” Korn said. “They should be held to the same accountability and transparency. What do they have to hide?”

Government accountability experts have also demanded that the committee be more open about its donors.

“For somebody spending that much money, and we have no idea where their money is coming from, they should be more transparent,” said Bill Mahoney, a researcher at the New York Public Interest Research Group.

Mahoney said that the committee has changed the entire lobbying landscape in Albany by the amount of money its spending and staying on message with the Governor.

Michael McKeon would not say whether the committee plans to release its donor list at some point, although he said the group would file its required lobbying paper work with the state’s Charities Registration Bureau by mid-May.

Two non-profits, VOCAL-NY and Community Voices Heard, have twice asked the Joint Committee on Public Ethics, the state body that regulates lobbying activities, to investigate the committee for its failure to file its paper work.

Michael McKeon said that the failure to file was simply a paper work mistake on the committee’s part.

“They should list who they are lobbying on behalf of. They failed to meet the basic filing requirements,” said Sean Barry, a spokesperson for VOCAL-NY. “They don’t take seriously the modest lobbying laws we have in this state.”

Barry called the committee “Cuomo’s Super-Pac” and said that VOCAL-NY has demonstrated at the Governor’s fundraisers where members of the Committee to Save New York were present. The committee, he claimed, is bringing in corporate money to get lawmakers to go along with Cuomo’s proposals.

VOCAL-NY and Community Voices Heard released a joint statement yesterday calling the Governor’s criticism of Super PAC’s “the height of hypocrisy, adding that the Governor and the committee support cutting spending on programs that low-income communities rely on.

“Cuomo defined himself as a reformer. He said he was going to clean up Albany,” Barry said. “Instead he is practicing some of the darkest parts of capital politics.”

The Joint Committee on Public Ethics has not responded to the two requests for an investigation, Barry said.

At some point, he added, the Governor will have to reconcile his image as a progressive politician with the fact that corporate interests are supporting him and his proposals.

Agnes Rivera, a board member of Community Voices Heard, said that the Governor’s ties to the committee have convinced her that he is not interested in reform. Rivera said that she has participated in several of VOCAL-NY's demonstrations against the committee.

Rivera has two sons who are now living with her along with both of their families, she said. Both sons have college degrees, she said, but are unable to find work. She said that the committee’s policies are not going to help people struggling to find work in the state and that she won’t vote for Cuomo because of his relationship with the committee

“The committee is not trying to save schools or save people’s jobs,” Rivera said. “They’re thinking about their own pockets.”