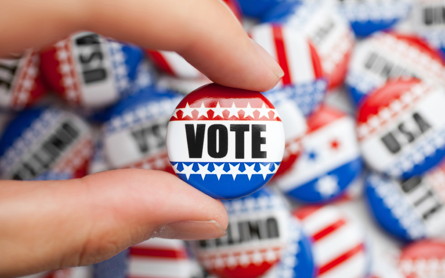 From the 82-year-old ethically-challenged Charlie Rangel's first serious electoral challenge since he was elected to the House of Representatives in 1971 to the surprise endorsement of City Councilman Charles Barron by a former Ku Klux Klan leader, this year's Congressional primary election season hasn't lacked for drama.

Voters will go to the polls throughout the state today, but here are highlights for New York City.

The newly drawn 5th Congressional district includes Jamaica, Ozone Park, all of the Rockaway Peninsula and and parts of Nassau County.

Rep. Gregory Meeks is fighting to keep his job in Congress in the new district against former NYC Councilmember Allan Jennings, small businessman Jospeph Marthone and law school graduate Mike Scala. Meeks has held a seat in Congress since 1998. He was investigated for fraud in 2009 but won relection in 2010. Jennings was elected to the City Council in 2001 and lost relection in 2005; he has been fined for sexual harassment and owes the Campaign Finance Board thousands of dollars in back payments and fines.

The 6th Congressional district is made up of pieces of the old 5th and 6th districts that were represented by Reps. Gary Ackerman and Bob Turner, respectivley. Both men decided not to seek reelection.

The district encompasses a large portion of Queens, including Flushing, Bayside and Forrest Hills.

A number of popular city politicians jumped at the chance to represent the new district:

Things may have changed since the last time you went to vote: Redistricting may have put your community in a new district and given you a new representative.

To be sure of whom you can vote for and where you should vote, check out these handy resources:

Rep. Nydia Velazquez has held a seat in Congress since 1993. She was the first Puerto Rican woman elected to Congress and has been endorsed by President Barack Obama, Sen. Chuck Schumer, Gov. Andrew Cuomo and Assembly Majority Leader Sheldon Silver.

Velasquez's most viable challenge comes from Councilman Erik Martin Dilan. Dilan is the son of State Sen. Martin Milave Dilan and has the support of Assemblyman and Brooklyn Democratic party boss Vito Lopez.

The 8th Congressional district is made up of Brooklyn neighborhoods including Fort Greene, Bedford-Stuyvesant, Howard Beach, Canarsie and Brighton Beach.

Assemblyman Hakeem Jeffries and City Councilman Charles Barron are locked in an intense battle for the district. Jeffries has the fundraising advantage and has been endorsed by Ed Koch and Gov. Andrew Cuomo. But Barron has the support of a number of fellow council people. Barron, a former Black Panther who is adamantaly opposed to Israel and opposes same-sex marriage, recently earned the endorsement of former KKK head David Duke. He also enjoys tremendous union support.

The 9th Congressional District is made up of Brooklyn neighborhoods such as Crown Heights, Prospect Heights, Flatbush, Brownsville Prospect Park and Sheepshead Bay.

Rep. Yvette Clarke has been in Congress since 2007 and has been endorsed by President Barack Obama. She was elected by large margins during her last two races. Clarke faces Sylvia Kinard, senior legislative attorney for the New York City Council. Clarke has focused on unemployment and education, but her biggest claim to fame is that she is the ex-wife of former Comptroller Bill Thompson. Kinard's campaign has nowhere near the fundraising abilitiy of Clarke's.

Eighty-two year-old Rep. Charlie Rangel has served in Congress since 1971. The race for the 13th district is expected to be his biggest challenge to date thanks to a series of ethics issues and health problems.

The district, made up of Upper Manhattan and the lower Bronx including East Harlem, Manhattanville, Washington Heights, Inwood, Fordham Manor and Norwood has been the center of attention when it comes to the city's congressional battles.

Rangel's challenger, Adriano Espaillat, is a progressive Democrat who served 13 years in the Assembly before winning a seat in the state Senate. He has focused on immigration, economics and housing issues during his time as a legislator. Espaillat is well funded and thought to be a serious threat to Rangel. However, Rangle has marshalled a great deal of support from the Demcoratic establishment â€“ including Gov. Andrew Cuomo.

Made up of the North Bronx and Southern Westchester, the 16th Congressional District features a contest between long-term incumbent Eliot Engel, who has held a seat in Congress since 1989 and Aniello Grimaldo, an attorney, teacher, reverend and author who wants to balance the federal budget, end world hunger and win this election.

Engel is expected to have all the support of the Democratic establishment.